When I first spotted the EeeTop PC at CES, I didn’t know what to think. I appreciated the idea, and saw some real use for it, but it didn’t quite appeal to me directly. Part of the reason for this is that I generally don’t care much for touchscreens, and while I can understand why some people love them, I’ve felt that they just weren’t for me. I’m not much one for gimmicks, and I considered a touchscreen to be nothing more than that.

After using the machine for a few weeks though, my opinions have pretty much spun a 360, but I still have some reservations. First is the fact that using a touchscreen can get tiring over a long period of time. You don’t really want to sit in front of any LCD touchscreen for more than an hour or two because your arms are going to get fatigued, and then using it any further is going to be more like a workout than an enjoyable experience.

But that leads me back to the fact that the EeeTop PC is not designed to be a replacement for your home PC, but rather an inexpensive PC that you can use anywhere in the house, for modest purposes. When you take the goals of the PC into consideration, and then experience its implementation, you can quickly learn to appreciate just how nice such a machine is to use.

Speaking of use, though, how does it all work? The entire surface area of the 15.6″ screen is touch-sensitive, although you shouldn’t expect extreme precision. After all, this is a very affordable solution, and it’s not designed as such (Wacom can relax, this is most certainly not a replacement for their Cintiq). But despite that, it’s still quite accurate, and it really, really impressed me. After an hour of use, you really find that you are more in-tune with the PC, and clicking on something as small as a systray icon isn’t at all difficult.

Earlier I mentioned that the PC could be used without a keyboard, and that’s pretty-much what someone would expect. So how on earth do you input text? You have two options, and both belong to an application called SoftStylus. This application is actually rather useful, so you’ll probably want to add it to your Windows’ startup, as it’s not by default.

Inside this application, you have the option to either write with the stylus what you need, on a letter-by-letter basis, or opt into the on-screen keyboard, which is far less tedious. The first solution you can see below: 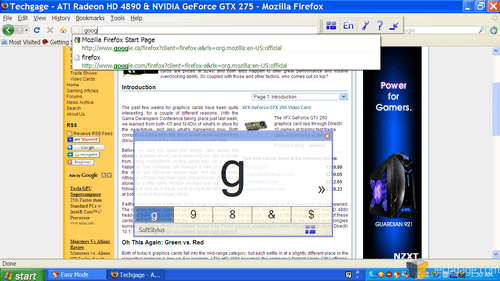 This solution didn’t impress me at all, but it’s not really the fault of the Eee Top or the application. It’s simply the fact that so many letters and numbers look like each other, unless you are incredibly precise, which generally takes too much effort. For example, when I tried writing “Google”, it most often interpreted my minuscule ‘g’ as a 9, and the same goes for the letter ‘o’, which it 80% of the time interpreted as a number 0.

Should you run into the same issue, the application gives alternative answers for what you might have meant, so that basically takes care of that problem. However, the ease of use of the on-screen keyboard can’t be underestimated… it is much easier to deal with than the writing input method, and I really have no idea why anyone would want to put themselves through the torture of using anything else.

Again, the on-screen keyboard is actually something that impressed me quite a bit. In all I’ve typed with it, I only made a mistake once, and that’s in all regards impressive, given you don’t really have that much space to work with, and I did tap in each letter fairly quickly. If you do happen to find it too small, though, it can easily be stretched to be as large as the screen itself. 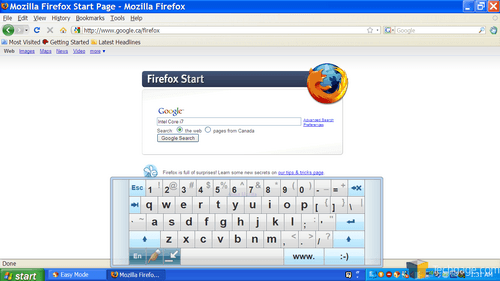 In a brief test, it took me exactly 9.8 seconds to tap in “Techgage rocks!”, properly written. For me, that’s approximately 1/100th of the amount of time required to tap in the same phrase on a cell phone, so if you can handle writing a cell phone SMS, chances are using the on-screen keyboard will prove to be an absolute breeze.

I’ve mentioned already what the EeeTop PC can be used for, but let’s talk a little deeper about the possibilities. This is a PC that’s designed for simple use, and it handles such scenarios without issue. I spent a lot of time with the PC, and I can honestly say I ran into very few issues, and the ones I did run into were caused when I was purposely trying to overload the machine to see what it was capable of.

For ultra-quick access to the more important features of the PC, you can access the “Eee Bar” via the left side of the screen. You’ll be able to see this at all times during use by the blue bar with an arrow that sticks out about 20 pixels. Like any of the custom software, this feature can of course be turned off completely. If you do opt-into it though, you’ll have access to the Easy Mode, Opera and Internet Explorer, the Eee Cinema, the Eee Cam, Eee Memo and Skype, along with other EeeTop-specific features. 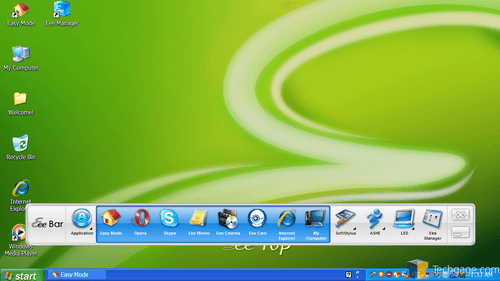 The Eee Bar and Easy Mode both leave a bit to be desired, however. While they look great and offer a fair amount of functionality, neither can be customized in any way. This means you cannot swap Opera with Firefox, or remove a shortcut entirely. This goes for both the Bar and Easy Mode. ASUS likely held back that functionality since they use custom icons for everything, and if you added your own, you probably wouldn’t have a high-res icon to go with it, but even still… that option would be extremely nice.

This all seems like a simple issue, but picture the fact that in order to access another web browser, you’ll have to go to the desktop or the Start Menu to access it. And even if you have, say, Firefox, as your default browser, if you click the Internet shortcuts inside of the Easy Mode “Internet” section, it will still open them with Opera.

Now, I can understand why the company is so gung-ho on Opera. It’s because Opera is a company that really excels at mobile browsers, and touchscreen functionality is built-in. This means that you don’t have to use the scroll to the right side of a web browser to scroll up and down. Rather, you can click on any free area in the web page itself and scroll that way. Internet Explorer and Firefox lack this functionality.

Firefox users are not left out in the dark, though. After some searching, I found an extension called Grab and Drag, which not only adds similar functionality to Firefox as what Opera offers, but even manages to improve on it. One simple addition is the “flick” feature, which allows you to flick the stylus upward or downward while in a web page to have the page scroll in either direction in a free fall, until you tap the screen to stop it. After much use, I came to enjoy that extension’s implementation far more than Opera’s built-in solution.