Given that touchscreen functionality isn’t likely at the top any developer’s list of priorities, not all applications will work as you’d hope them to. With that being the case, you cannot always expect a perfect experience, but in my time with the PC, I’m left with very minor complaints, and I never ran into a situation where I had no choice but to go grab a mouse. The keyboard on the other hand is very useful, for fairly obvious reasons.

Potential issues can arise with full-screen applications, such as some games, even simple ones. In one game I tested out (that didn’t run well at all thanks to the incapable GPU), the touchscreen simply didn’t work out well at all. Clicking anywhere on the screen would push the cursor to one side, rather than give me any sort of accuracy. I only found one title to do this, but there’s a definite possibility that it’s a common issue.

If there’s one common task that’s a little more difficult with a stylus, it’s double-clicking an item, and sometimes, even single-clicking. In Opera for example, I at times felt it too difficult to click a link to download something, although I’m not going to point the blame at the unit, since I find Opera to be clunky for the most part anyway. The same links in Firefox could be tapped just fine.

Double-clicking is best done by not using the stylus on an angle, but rather straight on. If even like that you find it too difficult to open an application, you can adjust the double-click speed in the Mouse Properties under Windows’ Control Panel. Increasing the amount of time allowed for a double-click should remedy the issue for most people. 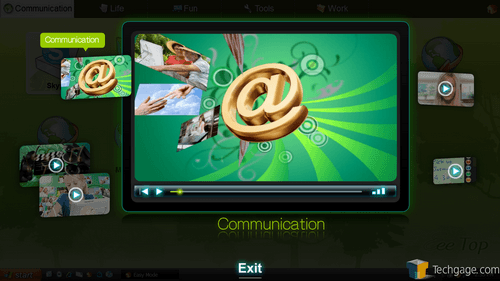 As the above shot shows, the EeeTop includes video tutorials that help you get started right away. Truthfully, the unit really is “pick up and go”, but if you remain skeptical or are unsure of anything, this section should help you get whatever you are confused about taken care of.

One aspect of computing that’s made more fun with a stylus is anything that can be zoomed or scrolled, such as a map or large photo. Google Maps is the first such application I tried, and with the stylus, everything was a breeze, from moving it all around to zooming in. Sure, it’s basically the same with a mouse, but something about it is a bit more enjoyable when a stylus is used. 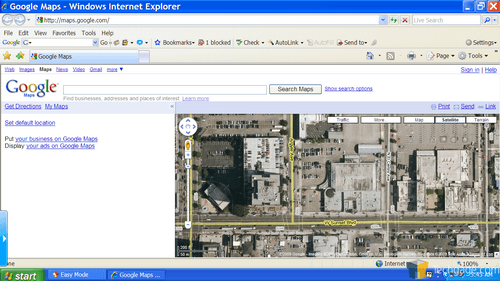 Let’s be realistic though, because Google Maps on a small resolution, as the above picture shows, sucks. So much of the screen is taken up with the web browser, that it leaves little room for the map itself. Luckily, even though the integrated GPU leaves a lot to be desired, applications like Google Earth work just fine. 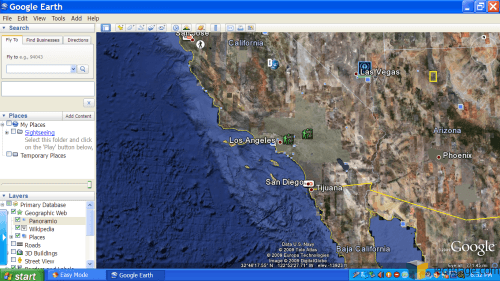 Obviously, Google Earth didn’t run quite as well as it would on a much faster desktop, but it certainly offers enough performance to actually be used. If I had to guess, I’d say that the scrolling and zooming in/out was at about 75% performance-wise when compared to a desktop, which isn’t too bad at all, and is in no way close to a point where some people may decide to just stick with Google Maps.

Not to sound like a broken record, the EeeTop PC isn’t designed to be a huge multi-tasker, that much is obvious. But, how much can it handle? To test, I did a bit of light multitasking as you can see in the photo below. There, I had a spreadsheet open, along with Firefox which had multiple tabs (including an active YouTube video), a game of Solitaire and also the foobar2000 audio player, which was streaming FLAC music from the NAS box. During this usage, which I consider to be completely typical of the max load that someone would push on the machine, everything remained very responsive, and absolutely no slow-down occurred. 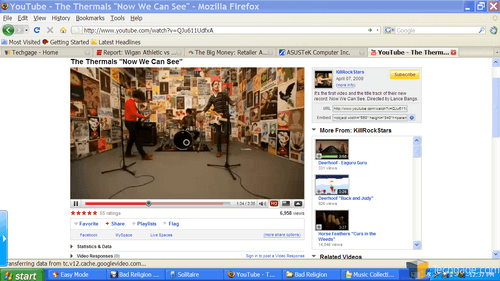 To push things even further, after I took the above screenshot, I decided to increase the stress on the hard drive by plugging in an external USB hard drive and copied a huge folder with many files off of it, to the main OS drive. Even during this process, things remained responsive and speedy.

In looking around the web for other opinions on the PC, many seem to be looking down on the machine because of it’s weaker hardware, but I believe they are looking at things from the wrong angle. ASUS didn’t design this to be a full-time PC, but rather a supplement, and in our multi-tasking tests, it remained speedy and responsive. With those findings, why exactly is more RAM or a faster CPU needed?

Well, there is one potential reason… HD video. In one test, I loaded up an HD video on YouTube and it lagged every few seconds… not an enjoyable experience. To see if that was just Flash’s fault or not, I downloaded the video (from the cache, more here) and ran it through SMPlayer instead. There, it ran much better, but rather than hit a lag spike every other second, it would last between 5 – 7 seconds without it, and the lag that did occur didn’t last as long as when viewing it through the web.

Depending on your stance, this issue can be blamed on either the codec used, or the CPU. The reason I point some of the blame to the codec is because in another test, I played an even higher-resolution video and it played without a single hitch. Unlike the H.264 likeness of the HD video on YouTube, this other video was a custom-made 1680×1050 1.56GB DivX AVI that runs for 35m 41s.

Let’s do the math. The YouTube video was 2m 31s, and at 40.7MB, that comes out to about 0.265MB/s throughput. The DivX video on the other hand, was 35m 41s and 1.56GB, which comes to 0.729MB/s. So theoretically, the higher-resolution video required triple the bandwidth, but played just fine, despite the fact that it even had to downscale while it was running (given the source was far larger than the screen).

Whoever’s to blame, this is a real issue if you want to watch HD video on sites like YouTube. It’s clear that the codec used on YouTube requires far more horsepower than DivX, which is too bad, since DivX still looks amazing and manages to run fine. If I was able to push a huge video like the 1680×1050 one on this PC, then obviously YouTube needs some sort of optimization, since as we found out, the issue has nothing to do with the file size.

For the record, when I took the same YouTube video mentioned above and recoded it using DivX’s 720p profile with max detail settings (can be done with MediaCoder, TMPGEnc Xpress and others) and then copied it back to the EeeTop, it played without issue.