When the EeeTop PC first hit my doorstep, I half-assumed how the review would turn out, and what points I’d focus on given what I saw of the device at CES. Having spent the past few weeks with the PC though, I’ve come to have a newfound appreciation for it, and when all said and done, if I personally had a need for such a PC (I’m an apartment dweller, so I’m always near a PC), I’d have no reservations in picking one up.

It goes without saying that most PCs have their faults, and the EeeTop PC is no exception, but the highlights of the product far outweigh the downsides for me. Let’s take the rest of this page to review the ups and downs, and you can hopefully come to your own conclusions on whether it’s for you or not.

The most important factor is the price, and when first unveiled, some scoffed at the $599 tag. While not inexpensive, it seems warranted for what you get. You can easily purchase a PC for the same or less, but it’s not going to be an all-in-one, and it’s not going to have a touchscreen. These two features are an obvious premium, and both aspects here are well implemented, so the price here seems fairly justified.

Since the launch though, prices have gone down, and units now sit at around the $530 mark at select e-tailers. This makes a good thing even better. This is a full-featured PC with touch capabilities, that’s small, works well, runs cool and is power efficient… for $530. It really is an impressive little machine for the money. 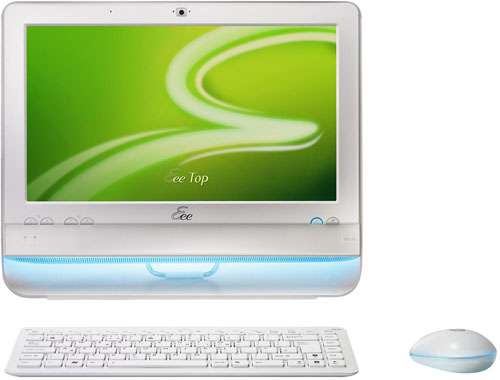 One aspect we’ve yet to tackle is the power draw of the unit, and since it is one of the most-touted features of the PC, let’s explore what kind of efficiency you can expect to see. You should note that anything special about the PC can be turned off, such as the blue LED light that shines from underneath the display, and also the monitor itself. Turning off anything will save power, but some aspects make a larger difference than others, as the below chart exhibits.

If the Wireless is in use, then turning it off will save about 1.5W – 2.0W, whereas turning off the entire display will cut 11W off the given total power draw (which is why it would be wise to tap the display’s turn off button whenever you leave the PC). If you want to save even more power, you could turn off the blue LED underneath which would save another 2W. Taking things even further, you could go into Power Saving (decreased brightness) mode, and with wireless enabled, typical power draw there would hover around 26W.

It goes without saying, 26W, or even 35W for a desktop PC is beyond impressive. Thanks to the low power draw, temperatures are quite reasonable as well. After hours of use, the warmest part of the machine turned out to be the top-left corner of the display, at 38°C. That might seem a bit warm for a screen you’re supposed to touch, but it’s fine… it sounds hotter than it really is.

One room for improvement on the EeeTop PC would be to see a discrete GPU added. Believe it or not, such a model exists (ET1603), but it’s not available on these shores… yet. That model ups the GPU to the ATI Radeon HD 3450, which is in all cases modest, but would be far more capable than the Intel GPU we’re given here. With NVIDIA’s ION platform beginning to take off, that’s another option ASUS might want to investigate (but adding ION to anything is going to increase the price around ~$100).

While the EeeTop PC isn’t for everyone, it definitely has a purpose for existing. It’s lightweight, can be used anywhere in the house, draws about half the power of a standard light bulb, works well and delivers enough performance for common needs, such as e-mail, web browsing, music and even some video. I walk away from this device very impressed, and hopefully by now you’ll know whether or not it’s for you.

For its price, what it can do and ASUS’ masterful implementation of everything, I’m awarding the EeeTop PC ET1602 a well-deserved Editor’s Choice award.