Let’s face it. Not everyone wants to shell out near $600 for a graphics card, but that doesn’t mean they want to pay much less and get a horrible performing card out of the deal. This includes myself… I still use a 7800GT in my primary rig, as I don’t really have a need for anything larger at this point. Sure those $600+ 8800GTX’s look sweet, but it’s a little overkill for 1600*1200 resolution.

Luckily, there are some sweet mid-range cards out there that cost half as much as the big boys, but still pack a punch. Not too long after the 7800GT was released, we seen the advent of the 7900GT, which amped up the performance a fair bit. Even later still, we seen a few companies take a 7950GT and 7950GX2 plunge. We are taking a look at the ASUS 7950GT, essentially a 7900GT with higher clocks, and HTCP support.

One thing you may notice right away, is that opposed to the 7800GT’s of last year and most 7900GT’s of this year, the 7950GT comes complete with 512MB GDDR3. The benefits of this will not be seen by everyone, as it’s most noticeable with higher resolutions, and probably also SLI. Since I am using a lower (by todays standards) resolution overall, I won’t be able to do comparisons between 512MB to 256MB. That said, let’s take a look at the card itself and what’s included.

For something as simple and small like a video card, the 7950GT comes in one honking box. Huge. It’s actually larger than the box of the ASUS M2N32-SLI motherboard! We can see from the box that Ghost Recon Advanced Warfighter is included, in addition to the fact that the card is HDCP compliant. This means that it’s fully compatible with next-gen video formats such as BluRay and HD-DVD, and will display it in it’s original uncompressed format. This is important, since if you do not have an HDCP compliant card, the video will have it’s quality worsened. Go go DRM go! 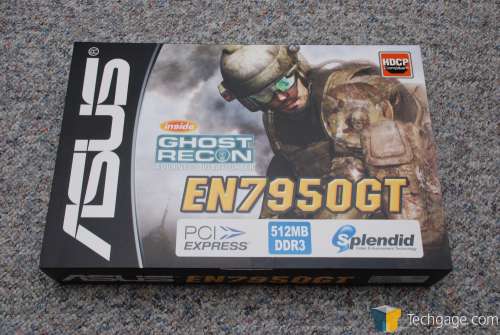 Inside the box, you will immediately find a quick install guide, ASUS branded CD-Rom holder, Molex to PCI-E power converter and also an TV-Out cable. A DVI to VGA connector is also included, should you need one. 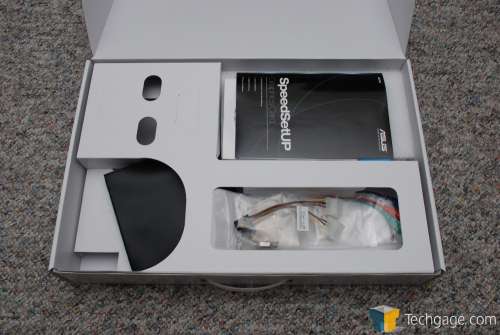 Here is the card itself. One big difference between the 7800GT’s and 7900GT’s is the fact that the latter do not take care to slap a heatsink on each of the memory chips. Since they all run rather cool, they are not needed. This is a great thing, as it should allow for better airflow since small heatsinks are not acting as a blocker. 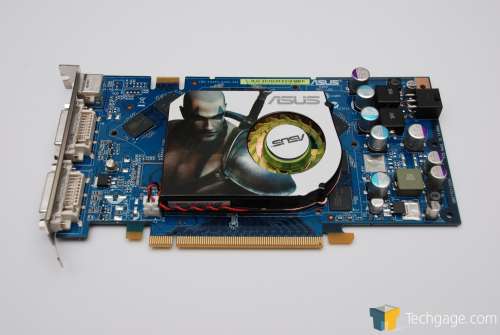 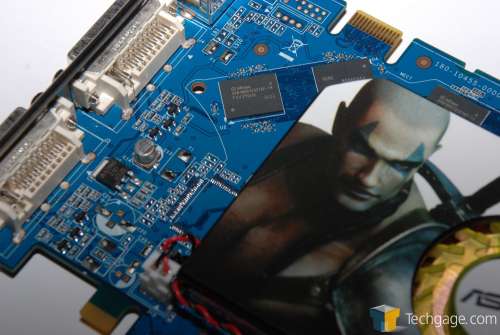 Because this isn’t a powerful beast like a GTX card, the 7950GT gets away with a very modest cooler. The character on the cooler looks familiar, but I can’t place my finger on it. Regardless, it looks cool ;-) 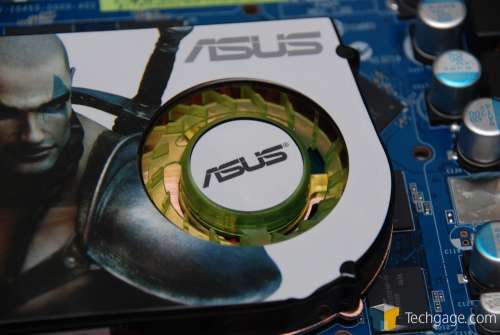 One thing you may have noticed is the fact that the slot bracket is a little bent at the bottom… that’s how the card arrived oddly enough. I can’t begin to explain how such a deformation would happen, but apparently someone was rough with the cards on the assembly line. Aside from the fact of it being strange, it bent back into place without issue.