The card includes dual DVI ports, and also a TV-out. Both connectors are available in the box to take advantage of these. Here is a high-res image of the back of the card. 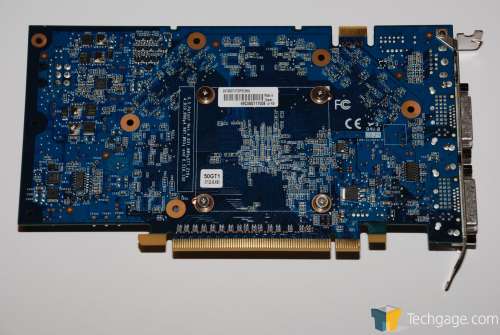 There we have it! Let’s check out some of the specs of the card, and then move onto some performance tests.

As I mentioned before, this card is essentially a 7900GT with a beefed up core. As we will get into shortly, it also overclocked far better than our 7900GT. ASUS took the standard road with their model, using the reference 550MHz Core / 1400MHz Memory clocks. Of course this card has plenty of memory available to handle large games, 512MB in all, brought to you by Infineon.

To cut a long story short, our 7950GT uses a 256-Bit memory interface and has a 44.8GB/sec bandwidth. The card is also capable of 13.2 Billion pixels per second and also 1.1 Billion vertices per second. 24 pixels per clock also embrace this beast.

Other such features include HDCP support, for HD-DVD and BluRay playback. Since these formats have various protections, they cannot be played at the original resolution without such support, due to fear of piracy. Because I am sure that someone wants to download a 50GB torrent. Regardless, this card will allow you to watch your videos in full, unadulterated resolution, which makes the card very suitable for an HTPC.

NVIDIA standards on this card include SLI capabilities of course, CineFX 4.0, Intellisample 3.0 and Vibrance Control 4.0. All the usual good stuff is included with the official drivers also, such as nView.

On the overclocking side of things, I was impressed by how far the card could be pushed. I did not water cool the card, but was able to pump up a full 100MHz on the core and 150MHz on the memory, for 650/1.55GHz clocks. Surprisingly, the card -could- go higher, but had bad affects in a few select games. 650/1.55GHz was the true sweet spot.

Temperature wise, the card could get mighty hot in a room with fairly high ambient temp, but that’s no surprise. Here are the official temps gathered with Everest Ultimate Edition over the course of a half hour with RTHDRIBL running in full screen mode. The 7900GT is included as well for comparison. The room temperature during all testing was 78°F. All results are in Celsius. 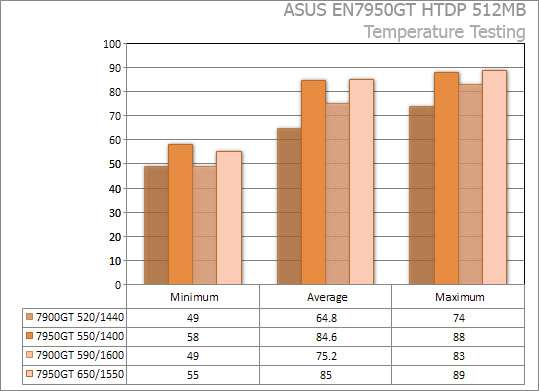 With the max overclock in tact, the card hit a nice 89°C. Even at stock speeds the card hit 88°C, so the overclock actually made very little difference that way. It’s warm, but didn’t affect the performance of the card at all. If you run a PC in a cooler room, then overall temps should prove lower than this.