The system is not overclocked, to retain a normal testing setup. Bare in mind that overclocked, some of these results should prove higher. Many reviewers benchmark using 1600*1200, but since I use a widescreen monitor I can only use 1680*1050, which means that the GPU will have slightly less pixels to process. Just bare that in mind when considering the results if you use 1600*1200. For comparison, an ASUS 7900GT 256MB was benched alongside the 7950GT.

Ghost Recon has always been a stature in the tactical shooter category, and for good reason. Advanced Warfighter takes what people loved, and improves on each and every aspect. Thanks to the incredible graphics and realism, the game is perfectly suited for benchmarking. 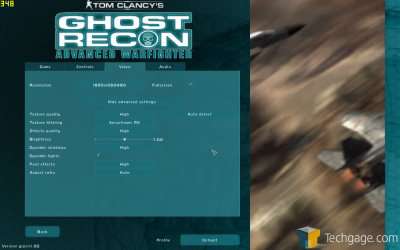 Before we jump into the graph, I have to point out the fact that there are no results for the 7900GT at 1680*1050. This is due to the fact that GRAW detects a GPU on the first run, and decides for you what you can, and can’t choose. I am unsure how the 7900GT is that much different, but that resolution was not even possible, nor were textures on high. Due to this fact, none of these results should be compared directly to each other. The 7900GT was utilizing Medium textures while the 7950GT was using High.

The section of the game used for benchmarking is the absolute start, where you and your friends jump out of a plane to the city below. If you’ve played this scene, it’s easy to know why it’s a good choice for testing a graphics card. Over the course of the 5 minutes, walking through the city and meeting up with the others also took place. 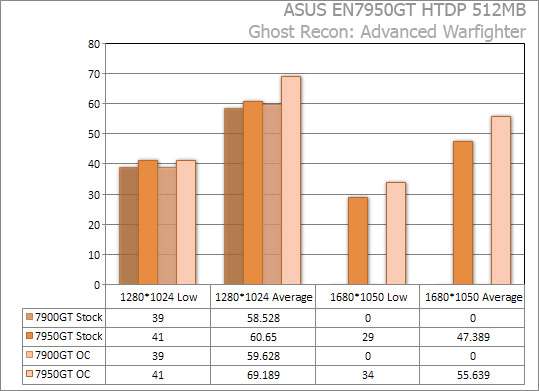 I am pretty impressed here. At 1680*1050 with nearly maxed out settings (8xAF as opposed to 16xAF), we received 55FPS. For a game with this graphic detail, that’s hardly something to scoff at. The low of 34 was also nice to see.

Quake IV doesn’t need an introduction to anyone. Running off the Doom III engine, it’s obviously one system intensive game. In fact, this was one of the first games out that recommends a 512MB card for “Ultra” detail settings. Since the monitor I used can’t reach very high resolutions, I couldn’t compare potential differences however.

The level used here was Convoy, which starts you off coming out of a ship. You need to haul ass to a crew waiting, and you proceed on a “train ride” and encounter much action along the way. This level is good for benchmarking for various reasons, the primary being the fact that there is a LOT of action.

Since the game doesn’t officially support 1680*1050, it was set manually using r_mode -1, r_CustomHeight and r_CustomWidth. Detail settings were left on High, but AA bumped up to 4x. 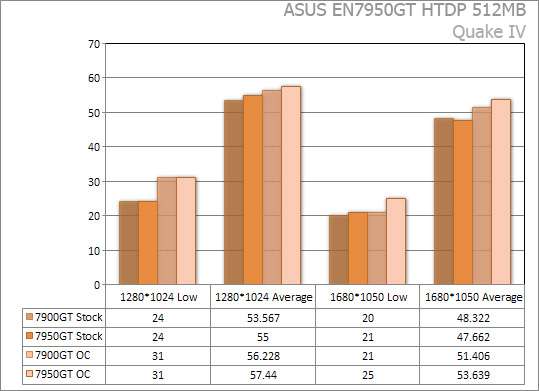