Though 3D Mark is pretty useless for gauging a video cards worth, it’s fun to try to break personal records and compare similar cards to one another. Speaking of useless, 3D Mark 01 comes to mind, as it’s now 6 years old. Even though that benchmark is incredibly CPU sensitive, better GPUs also make a difference. 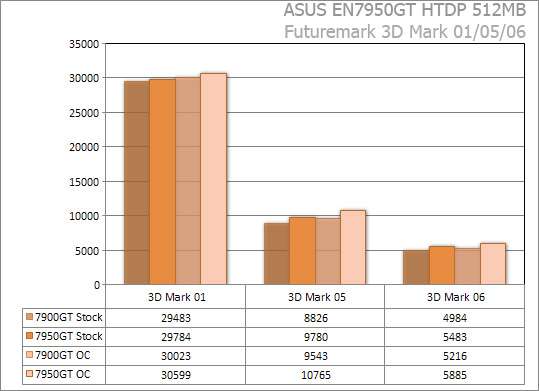 At the time of writing, ASUS’ 7950GT retails for around $300US and I consider this to be well worth it. I remember handing over close to $500 for my 7800GT last year, and its performance is weak compared to the card we looked at today. At $300, the card is priced similarly to other companies cards on the market. eVGAs card costs around $280 while Pines is around $330. ASUS is the only one that bundles a killer game though. If you were planning to pick up GRAW in the first place, picking up this card will save you a few dollars. The only other company to bundle a game with this card, that I could see, was eVGA with Hitman.

If I was in the market for a killer GPU and only had $300 to spend, I’d jump all over this. On the ATI side of things, there is the comparable X1950 Pro which retails for the same price. It may even exceed the 7950GT in performance, so you may want to check out that offering as well. As it stands though, this is one card that’s well worth your cash. It proved extremely overclocking friendly on AIR, and was rock solid stable. Coupled with one of the top games going and HDCP support, this card is well worth looking at. I am awarding the ASUS 7950GT 512MB an 8/10 and our Editors Choice award.