If you’ve read any of my processor reviews, you are probably aware that I don’t much care for an unstable overclock. As far as I am concerned, a high overclock is only good if it’s stable, because realistically, no one purchases a new GPU for the sake of only finding the maximum overclock. That is why I focus on finding the max stable overclock, rather than an overclock that can barely pass a benchmark run.

To find a max stable overclock, I first find an overclock that I believe could be stable. Once I do that, I’ll run a single loop of 3DMark 2006 to test for stability and to look for artifacts. If that run passes successfully, I’ll jump into a game quickly to see if the same results are exhibited in real-world gameplay. If that proves successful, I then run a loop of 3DMark 2006 for 4 – 8 hours at 2560×1600 2xAA to stress the card to its limit.

If after that point, the card is deemed stable (as in, no crashes occurred and there are still no artifacts), then I will proceed with benchmarking four select titles again: Call of Duty 4, Crysis, Half-Life 2: Episode Two and also Unreal Tournament III.

All overclocked testing occurs at 2560×1600 for the simple fact that it’s such a strenuous resolution. For comparisons sake, I also include results from a card that’s a step up from our overclocked model.

While not a record 9600 GT overclock, it’s still impressive given that no fan is used whatsoever. That in itself is what sell this card. Having a good overclocking ability is just a bonus. But does our overclock do any good? 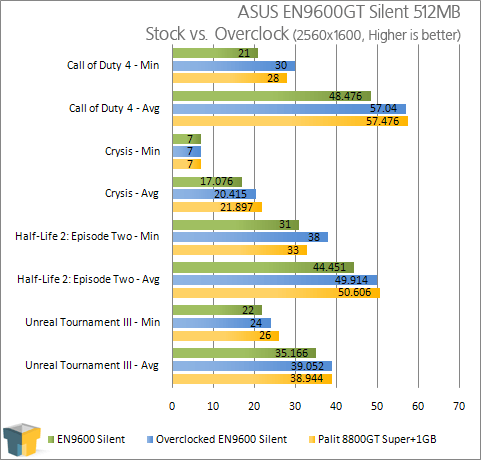 Yes, no question. In all of our tests, our overclocked card kept right up to the 8800 GT… not bad for a card that costs at least $45 less. Oh and did I mention, this card is silent? I’m finding it difficult to come up with a reason to complain about this card.