In testing power consumption for our graphic cards, the system components are kept consistent to help keep accurate results. To capture wattage, a Kill-a-Watt is used. It is plugged straight into the wall and the PSU is plugged in directly to it. After the computer boots into Windows and is left idle for five minutes, the idle wattage is captured. 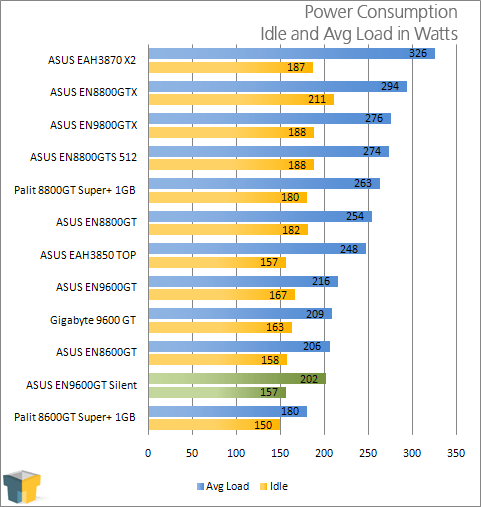 While our EN9600GT Silent doesn’t perform right up with the 8800 GT without an overclock, it uses a lot less power. The reference-style Palit 8800 GT Super+1GB helped our system suck a total of 263W on average, while our lowly passive card brought that down to 202W. That is a substantial difference.

Simply put, I love this card. I made no secret in the past that I like what the 9600 GT offers. It’s a fantastic performer regardless of the price, evidenced by the fact that it can handle a gorgeous game like Call of Duty 4 at 2560×1600 with no issue. It’s a great time to be looking for a graphics card – there’s never been so much value for your dollar.

To make the 9600 GT better though, ASUS came along and created a model with a silent cooler, perfect for HTPC buffs or those who generally want their computer to be as quiet as possible. While the design of the cooler is a little strange, it is effective, and that’s all that matters. In their original press release, they boast that their Silent cooler is around 10°C cooler than a reference cooler, and in my tests, that’s not a bad figure to go by. 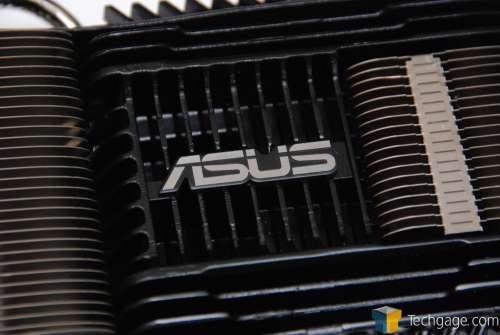 In three different tests comparing the temperature of the EN9600GT Silent to Gigabyte’s 9600 GT which uses the reference cooler design, the ASUS card came out on top each time, by 5°C at a minimum. On one occasion, the card did perform 10°C cooler on average, but I’ve been unable to duplicate that.

Like passive coolers of any sort, this one thrives on a cooler environment. If your computer room hovers around 90°F all the time, then you will see different results than me. If the air is cooler, then the card won’t be stuck with warm air to deal with. At 90°F and higher though, the card just sits there along with the hot air, and that’s bound to increase temperatures. All my testing was performed in 78°F – 82°F and I ran into no issue.

Because ASUS considers their products to be of the premium variety, they tend to cost a little more on average. I was surprised to see that this card doesn’t stand by that, however. At NewEgg, for example, ASUS’ 9600 GT cards are priced right in line with the others. Even better, this particular passive-cooled card only carries a meager $5 premium over the original.

I can’t find a single reason to not like this card. It may be bulkier than other 9600 GT’s, but that’s the trade off for having pure silence. Plus, despite it’s thicker body, it’s still perfectly suited for SLI mode, for those interested in even more performance while retaining a quiet machine. This card would compliment both an HTPC or desktop rig where low-noise is a concerned, and as a bonus, it’s priced right. I didn’t have to think too hard about awarding the EN9600GT Silent an Editor’s Choice award. It well deserves one.