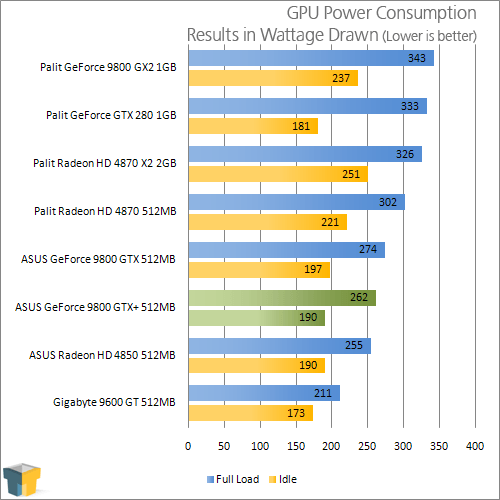 Similar to our temperature tests, the GTX+ proved not only to run cooler than the original, but it also sucks less power from the wall, thanks in part to its die shrink. Runs cooler, more power efficient and more powerful? Three things we love to see in any computer component.

When all said and done, ASUS has a quality release with the Dark Knight version of their 9800 GTX+. The GPU itself is already quite capable of handling the most demanding games at nice resolutions, as we’ve seen in our performance reports, and it comes in at a great price to boot. As pointed out earlier in the article, this particular GPU can be had for as low as $160 with the help of a mail-in-rebate, making it an affordable, yet still powerful choice.

As with any GPU purchase though, it’s important to keep an eye out for instant and mail-in-rebates, if you are looking to save some money. Rebates used to be a fad, but now it seems they’re almost a requirement, because at sites like NewEgg, every second GPU seems to carry one. Because of that, it’s very easy to wind up paying more for a lesser product, so keeping your eyes peeled is imperative. 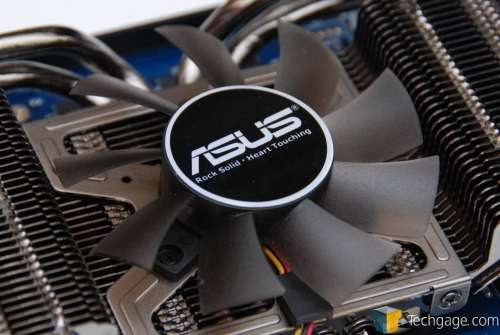 Luckily though, this ASUS card costs no more than the rest of the GTX+ cards I’ve found, especially after taking the MIR into play, so it should undoubtedly be considered if you are on the lookout for such a card. Why you wouldn’t purchase this card is if you are willing to spend a little more money to pick up an HD 4870, which is pretty-well the next step up. This GTX+ beat out the HD 4850 in every one of our results, so there is no competition there, despite that card carrying a similar price tag.

This is a quality GPU, no question about it, but I’d love to see ASUS release the Radeon HD 4870 version of their Dark Knight on these shores, as that’s a GPU that really could take advantage of superb cooling.