Despite having a number of models available, ASUS is still not a name that’s synonymous with notebooks. But one thing is certain, they don’t push out poorly designed products. We are taking a look at a perfect example of what a quality notebook should be, with the G1S gaming series.


When deciding on a G1S purchase, be sure that you are picking out the correct model. There’s a G1 floating around, which has older specs. The G1S came out after the launch of Intel’s Santa Rosa mobile platform, so power consumption is improved, as are the specs all around. The -A1 after the model denotes that this is the first revision of the notebook. There has not been a follow-up yet, but there has been for the G2S. Below, you will find all of the specs for the G1S-A1.

Overall this is a very capable gamer’s notebook. The processor is fast, there is sufficient memory and the video card is the second-to-best to what’s available from NVIDIA. The G1S impresses me for the fact that it includes both eSATA and HDMI, two technologies that are still not that mainstream. Even if you can’t support either of those connections right now, you might be able to down the road, and it will be then when you appreciate their inclusion.

The eSATA support, to me, is the more important of the two. For those unaware, eSATA is essentially external SATA, which allows you to use an external hard-drive at full-speed. This allows you to return home, quickly backup what you worked on while out and then be on your merry way. eSATA is more than just a tech fad, it’s something that will prove quite useful to those who use it, especially for backup purposes.

If anything strikes me odd about their choice of components, it might be the fact that the hard-drive is 5400RPM and not 7200RPM. From my understanding, this notebook had it’s specs fixed in May, along with Santa Rosa’s launch. At that time, 7200RPM 160GB hard-drives were still expensive, and I can’t blame their choice of preferring density over speed. Personally, I don’t mind having a level take 25% longer to load if it means I have a hard-drive that’s 50% larger. Still, I assume that if we see a B1 revision of the notebook, then the hard-drive will be one of the components upgraded.

If there is an immediate downside to the G1S, it would be that it includes Windows Vista. Sure, this isn’t ASUS’ fault. In fact, it’s all a matter of tastes. I’ve mentioned in previous articles about my Vista gripes, so I won’t get into them here. If anything, all I will say is that I still prefer XP over Vista, especially when it comes to notebooks. The reasons are stability, reliability and better battery life.

One area where I have praised ASUS in the past, is that if they offer a notebook with Vista included, they will have Windows XP drivers available through their website. Well, I’ve been using this particular notebook for over two months and there are still no such drivers available. During a conversation a few weeks ago, ASUS told us that drivers would be added, however they didn’t have a prediction when that would happen. As it stands, there are a few drivers available, for the Camera and touchpad, but that’s it. 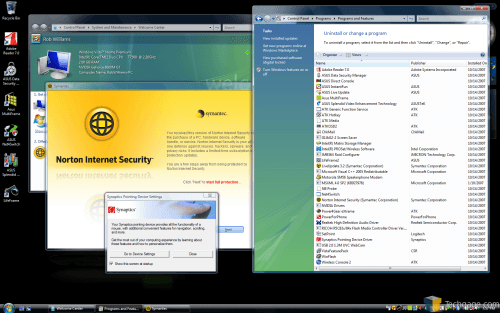 The G1S comes pre-bloated like all other ASUS laptops we’ve reviewed in the past, with the only piece of commercial software being Norton Internet Security 2007. This is more of a trial, however, as it lasts 90 days prior to requiring you to purchase a license. In my experience with NIS though, I’d recommend an uninstall and choose a more light-weight and capable firewall application. Most other applications are from ASUS’ own labs, which can add to the usability of Vista. Here is a quick list of notable pre-installed non-system software:

As a casual user, you might appreciate a few of the applications that ASUS pre-bundles here, but most gamers will take the uninstall route for most of these. I don’t have extreme gripes on the bloat, given that a lot of it is delivered by ASUS and is not commercial software, save for the the Norton Internet Security. It would be great though, to have an option of which software packages to include after Vista is installed, instead of simply being given everything all at once since it takes time to uninstall. Luckily for most, this will not need to be done that often. During testing, I had to deal with it five or six times… tedious!