Enthusiast-level gaming notebooks don’t need to cost a fortune; something ASUS proves with its $1,249 G53SX 15.4″ offering. It features a 1080p display and an NVIDIA GTX 560M that’s able to power today’s games to it. This, in addition to an Intel quad-core processor and 12GB of RAM make it a very powerful and drool-worthy notebook.

There once was a time when it’d take the sale of your car in order to fund a notebook capable of real gaming. Fortunately, things have been vastly improved since then, with even $1,000 gaming offerings today proving suitable for most people.

The ASUS model we’re taking a look at here is a bit pricier than that, at about $1,249, but as we’ll soon see, it’s packed with high-performance hardware, a gorgeous screen and a smart design – resulting in the best gaming notebook I’ve ever had the pleasure to test.

Before we get into the nitty gritty, it’s worth pointing out that ASUS, like many other notebook vendors, doesn’t offer just one version of a particular notebook. Certain models include smaller hard drives, less RAM or a faster processor, and of the four models I’ve seen, they’ve ranged in price from $1,000 to $1,499. So, depending on your budget, you do have a bit of flexibility when purchasing a G53.

With its G53 series, ASUS has set out to give gamers the option of having a fully capable notebook without breaking the bank. There’s no dual-GPU configurations here, or SSDs, or RAID or anything that would be considered high-end, and that’s to keep prices affordable. Instead, we’re given models that have a well-thought-out blend of components that will prove more than suitable to deliver a solid gaming experience, with no individual component lacking more than another.

The G53 model we’ve tested is the G53SX. It includes a quad-core Intel Core i7-2630QM processor (2.0GHz but Turbo-enabled up to 2.9GHz), an NVIDIA GeForce GTX 560M graphics card, a staggering 12GB of DDR3 memory, a 750GB hard drive, a bright 1080p display and an efficient design that assures your game will never lag due to overheating (a problem I’ve been bit by before with personal notebooks). All in all, these specs are impressive – especially so when you think back to the $1,249 price-tag.

Notable features include a collection of ASUS specific software pre-installed, EAX 5.0 and THX TruStudio audio, support for NVIDIA’s 3D Vision (glasses and the receiver are not included), wide openings in the back for efficient airflow and a ergonomic design to help improve comfort – important for those long gaming sessions. 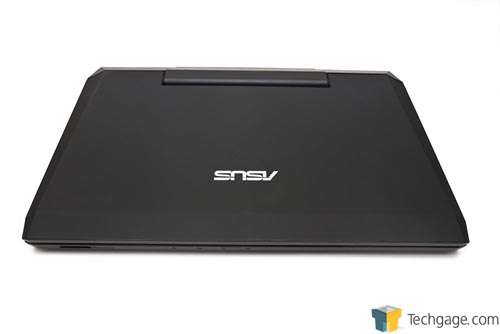 Above, the G53 looks fairly unassuming. It doesn’t look like a gaming notebook, but rather features a clean black aesthetic with a matte surface. For those that don’t care to have their fingerprints show all over a glossy surface (of which I am one), this is perfect. The same could be said about the screen, as we’ll see in a moment.

At 15″, the G53 isn’t a huge notebook, but it still feels and looks like one, part in thanks to its bulkiness and weight. To help give a perspective to its actual size, here’s a DVD and its case sitting atop the closed notebook: 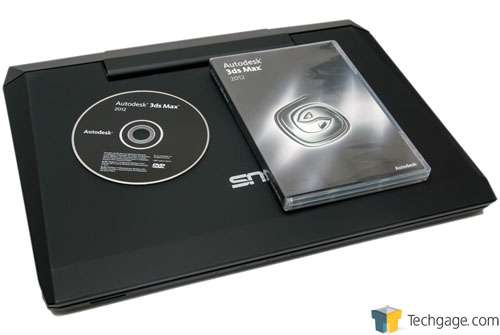 Opened up, we can see that the simple aesthetics have carried themselves inside, as well. The surface still has a matte finish, while the keys are a bit more rigid plastic, but not the fingertip-grabbing kind. 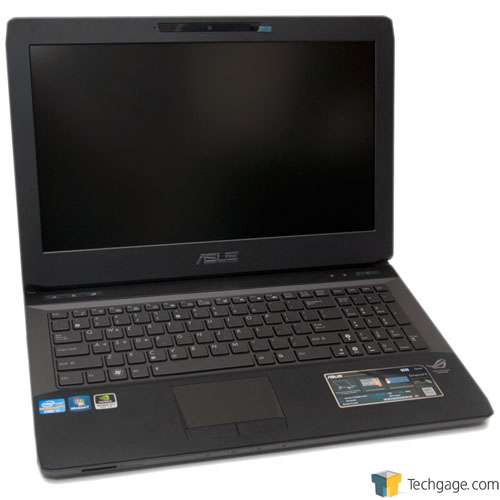 The trackpad, like the rest of the matte finish, is easy to slide your finger along. It neither gets too warm during use or becomes uncomfortable to use after a prolonged period of time. It’s safe to assume however that most G53 owners are not going to be making much use of this, regardless. 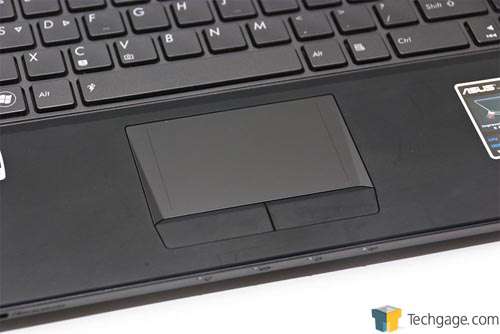 The keyboard features a chiclet design for the keys, typical of most other current notebooks. Unless you are a frantic gamer who likes to pound at their keyboard, they keys will remain rather quiet. My desktop keyboard, which features a similar design, is at least three times as audible while typing. 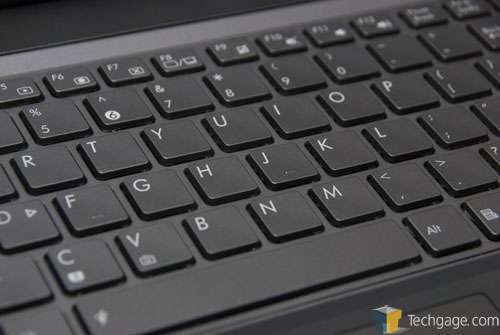 At the top-left of the notebook once opened are three buttons representing the keyboard backlight, power scheme and also the color mode. On the opposite side is the power button and some LED indicators. 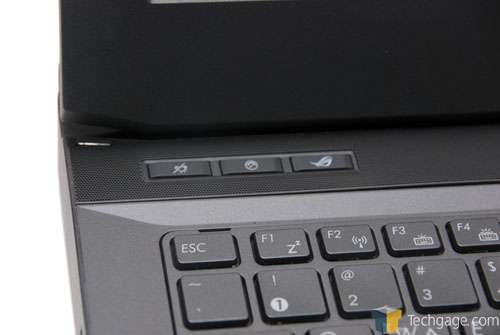 Here’s a better overall view of the notebook’s keyboard and touchpad area: 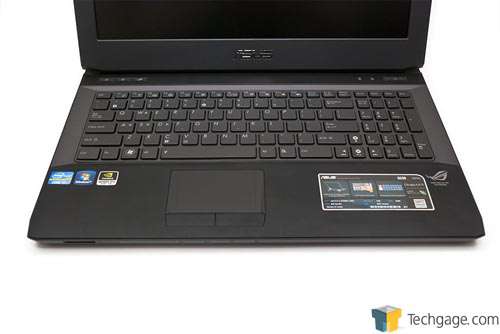 Most notebook vendors aren’t too concerned with including a proper HD (720p) webcam or even one that provides excellent images, and ASUS is no exception. The 2.0MP offering here is suitable for simple use, but for business or chatting with family or friends, an external HD offering would be preferable. 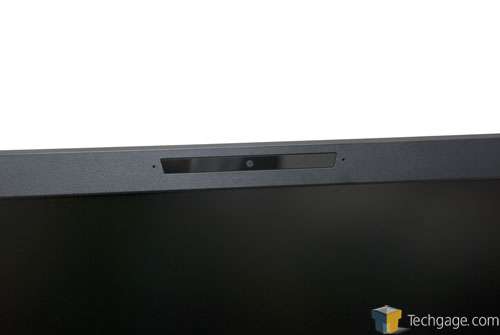 When looking at the front of the notebook in its closed position, it seemed unassuming, but turn it around and it becomes clear that this notebook means business. The empty part in the middle is where the huge battery is stored, while the openings on each side is where the warm air inside gets expelled. As heat can become a major issue in gaming notebooks and even result in lagging games, this simple design can help rid that problem. 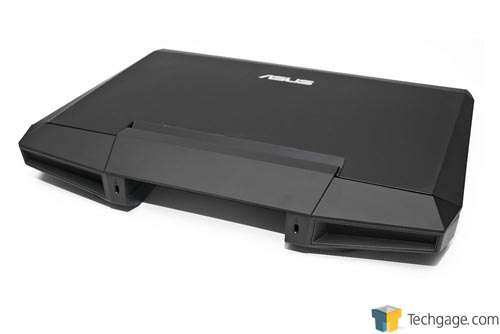 And here’s the G53 with its 8-cell battery plugged in: 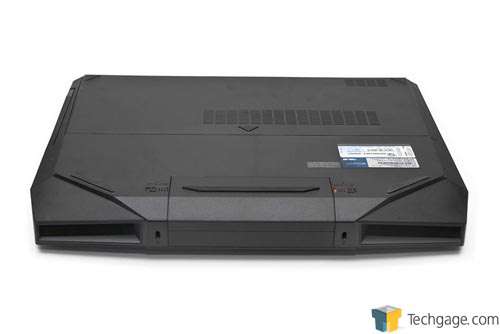 I unfortunately forgot to take a picture of the sides to show the connection possibilities, but I’ll explain them here. On the left side is the optical drive, with two USB 3.0 ports to the right of it, situated about as close to the front of the notebook as possible. On the opposite side, the audio jacks are at the absolute front, while moving inward we have a USB 2.0 port, USB 3.0 port, HDMI port, VGA port, Ethernet port and finally the power.

On the next page we’ll dig a bit deeper into the G53SX’s specs and also take a look at its default software: