To find the max stable overclock on an NVIDIA card, we use the latest available version of RivaTuner, which allows us to reach heights that are no way stable – a good thing.

One of ASUS’ selling points on this card is their ‘iTracker’ software, which is essentially a tuning application that lets you increase temperature thresholds, clocks and even voltages. The overall design is very clunky, but once you use it for a few minutes and understand where things are located and how to increase the clocks, it’s easier to deal with. I’m not that impressed by the actual GUI, either, but that’s a personal opinion and may vary from person to person. They are definitely targeting the gamer, and that’s understandable. 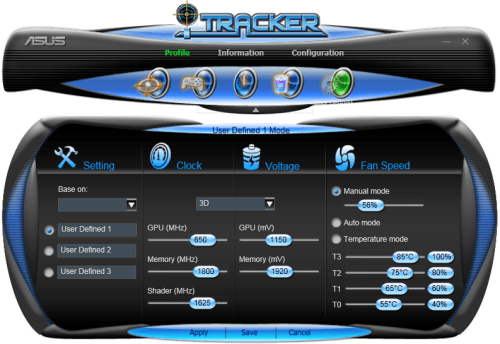 One part of the clunkiness is that it’s difficult to set your own values. Once you finally figure out how you’re able to increase them, it’s almost impossible to get them to exactly where you’d like them. The slider bars go left to right and not change the value by 1, but rather 3 or 5, or around there. So, it’s impossible as far as I can tell to get the slider to sit right on certain numbers. The GPU voltage for example, I wanted to set to 1300 (1.30v), but it would either hit 1298 or 1303. Not a huge deal, but a little frustrating.

Overall though, the tool works, and it works well. I still prefer the ease-of-use with RivaTuner, but that tool doesn’t allow adjustments of voltages, whereas iTracker does. Increasing the voltages does help, but I really wouldn’t recommend anyone spending too much time with it. 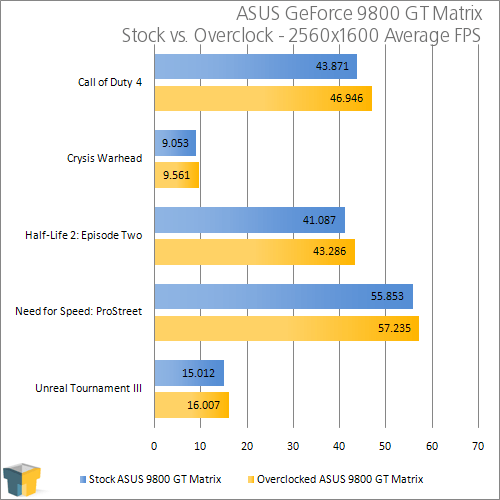 With the new clocks, performance is definitely increased, but not by a great margin. It begs the question of why overclocking this card would even be important, and the answer is simple… it isn’t. There is really no reason to worry about overclocking whatsoever. It will just heat the card up more and offer minimal gains. 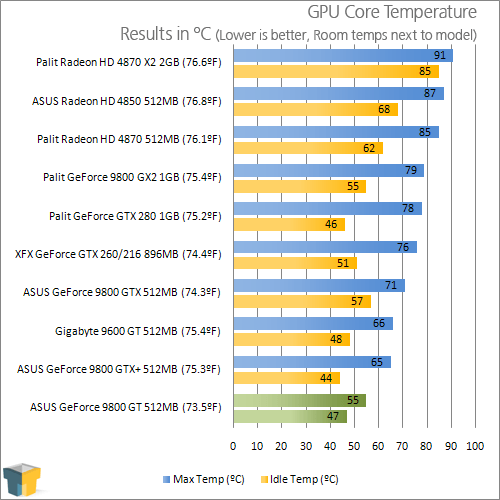 What’s nice to see is that the faster 9800 GT runs cooler than the 9600 GT, thanks to ASUS’ robust cooler. At full load, the card is definitely audible (not a huge whine, but still noticeable), but the temps were definitely kept in check.