Everest is another benchmark that shows off the true power of a CPU, throughout all 6 of the CPU and FPU benchmarks. 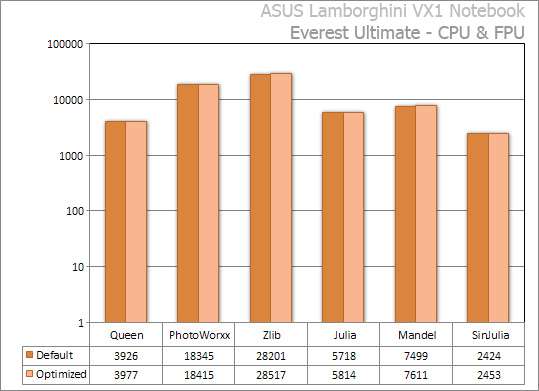 Once again, there is not a large difference between the optimized and default setups. The results are what I expected.

Since the VX1 is not a gaming laptop, I only took a spin through a single title: Half-Life 2. I recorded the Avg/Max FPS with FRAPS. I tested at both the default video settings and also the LCD’s native resolution of 1400*1050. AA, AF and all other options were left at their defaults. 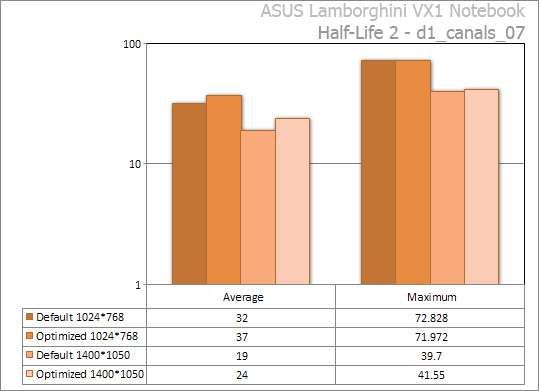 1024*768 allowed an average of 32FPS, and I have to say that it actually had felt like more. The game ran like a dream, although due to the non-native nature of the resolution, it didn’t look as crisp as it could have.

At 1400*1050, the game did start to feel a little sluggish, but ran fine. Though I didn’t run into any parts with huge action, I’d imagine that’s when you’d want to lower the resolution to something more manageable, such as 1024*768.

All of the following benchmarks were performed on the default system, slightly cleaned up. Skype, MSN and other various programs were exited, and Norton Internet Security was un-installed.

The first slew of tests were multi-media based. There are no comparisons here, as the optimized system didn’t make any real difference. First, a DVD movie was ripped to the PC via an unmentioned program, and then converted using the default settings with Nero Recode. This program will recode any DVD to fit it to a standard 4.5GB disc for burning.

After gathering results from the DVD Rip, I threw DJ Tiestos – In Search of Sunrise 4 disc 1 into the drive and ripped it using Exact Audio Copy. The result below is from the time the program started ripping the 80 minute disc, and converted it to FLAC format. Finally, using the LAME command line tool, the 14 .flac files were converted to 320Kbps .mp3s.

Here are a few other various results. Some were gathered using SysMark 2004 SE and MobileMark 2005 from Bapco.