Throughout all of the testing, I reformatted the laptop about three times. Because of this, I was able to spend some quality time with the restore disc.

There are three included CD-Roms, two are for the actual restore process and then a driver disc is needed for specific drivers. On boot, you just need to push ESC to bring up a boot priority menu, and boot from the CD-Rom that way.

After a few minutes, I was prompted as to how I wanted to restore the PC. I picked an option that allowed the system to be restored to it’s original state, with two separate FAT32 partitions. Once that was chosen, restoration went underway. 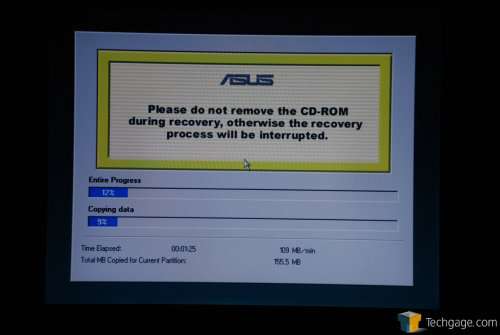 The entire restore process took around 70 minutes, and the result was exactly as you’d expect. The laptop was restored to the exact state it was in prior to being booted for the first time. So, after the restore you need to put in basic Windows information again, set up the Bluetooth mouse… et cetera. The process was very quick overall. I wish the restore disc came on a DVD rather than a CD-Rom though. That would have allowed total AFK-ness while the restore process took place. Instead, you will need to check on it every so often to make sure you don’t need to swap discs.

If ASUS is a company not on your mind when deciding on a laptop, maybe they should be. Unlike many other laptop manufacturers, ASUS strives to be unique. Although the VX1 is not as unique as it could have been had there been no such thing as an ACER Ferrari, it’s still very well designed and will please any Lambo fan.

Touching on that… this is one sexy looking laptop. It’s not dull in any sense, and should catch many gawking eyeballs if you use it in public. If you are lucky enough to own a Lamborghini, then this laptop was made for you, but it doesn’t take much to prove why.

As for the overall design, I don’t have any immediate complaints. The keyboard layout suited me just fine, and I appreciated the location of the ~ and Fn keys. I also liked the fact that I didn’t need to press the Fn key for tasks I use all the time, such as Prnt Scrn. There is even a built-in mic should you actually need it… for video conferencing or Skype while on the road. 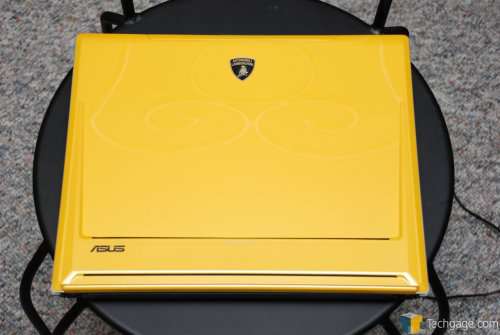 Regarding the specs, they are exactly what you’d expect. This is a media notebook, not a gaming one, so the lack of a good mobile GPU makes sense. In the end, the 7400VX proved decent for our Half-Life 2 tests, so you should be gold if you want to play anything with similar video quality. I do wish the memory was a tad faster, but in favor of timings, not the frequency. Since this is a media notebook, media encoding/decoding is probably on some “to-do” lists. Although the memory timings are standard, I’d imagine going from 5-5-5 to 4-4-4 would improve such tasks overall.

The beefy T7400 CPU makes up for the lack of timings though. This is one -fast- CPU, and will treat you well with whatever you plan to use it for. Like most recent notebooks, the CPUs cores will decrease to 990MHz a piece while nothing intensive is going on, so as to provide better power consumption and improved battery life while on the road. As MobileMark proved, the included 5200mAh battery allowed for approximately 2 hours and 36 minutes worth of DVD video viewing. This may even be prolonged further if you dim the screen and shut down many of the system services first. Or, if you plan to read a book on the PC you can expect 2 hours and 59 minutes worth before shutdown. This is not terribly impressive, but again standard.

I have been unable to find this exact model online for purchase, but the original version with the T2400 CPU retailed for $2,799USD. So a similar pricepoint can be expected here should you be able to find it through a retailer or e-tailer. You would think that a Lamborghini inspired laptop would cost far more than this, but after doing some light research, $2,799 is reasonable. Compared to current Dell XPS and other comparitive laptops, the VX1 actually has -more- to offer for the same price. Some other notebooks had only 1 GB of ram, and a smaller CPU, while the VX1 offers a killer CPU and a full 2GB of ram. In the end, this laptop is likely priced higher due to the branded name, but it’s not easily shown when comparing similar laptops from other companies. 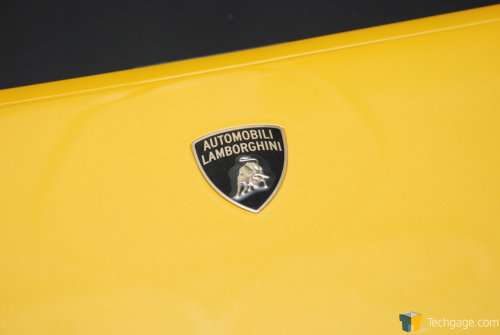 Overall I found the VX1 to be a very solid laptop, but of course there are a few things that I didn’t like. First off is the fact that the screen is a non-widescreen resolution. This did not bother me for most of the applications, but for those who are used to widescreen, it may be a little odd at first. The 1400*1050 resolution did not affect me directly… as the DVD movies looked just fine. This standard resolution may prove easier for some games however, especially ones that don’t immediately support widescreen resolutions.

Another thing that bothers me are the stickers plastered about. NVIDIA, Intel and Windows I understand… those are commonplace. However, the other two stickers are huge, and serve no other purpose than being on a display model. I obviously did not test out removing them, so I cannot report how difficult they are to take off. Your best bet is with rubbing alcohol, but really, they should not be there on a retail notebook in the first place. Warranty and system information is on the box and in a pamphlet… which should prove to be enough.

The software bundle could be improved a bit also, but is not a huge concern personally. Most of what’s pre-installed could be downloaded manually within minutes, so there is not a huge bonus in that regard. On the other hand, installation was a true breeze with the only hitch being setting up of the Bluetooth mouse. That only took a mere 3 minutes though, due to the BT driver install.

If you like what you see, then you can not go wrong with picking the VX1 up. If you are not a fan of Lamborghini, or don’t really want a laptop dedicated to it, ASUS offers many other professionally styled laptops for you to peruse, including their S6 leather bound notebook.

I am awarding the ASUS Lamborghini VX1 an 83%, with these pros and cons: