The M2N32-SLI Deluxe includes a few things that I will take a quick look at. Neither of these I would use on a regular basis simply because I do not have an immediate need for them. However, your daily routine differs from mine so you may very well use a few of them. Or all.

To give a test, I listened to various music on my primary PC, then moved the 5.1 headphones (Turtle Beach HPA) over to the M2N32 and listened to the same music. Overall, I found it to sound quite good, but it doesn’t beat out the Chaintech AV-710 in the other PC. Without any adjustments being made to the headphones during switching PC’s, the M2N’s audio sounded a little hollow during a few songs. Tweaking the headphones and software helped a bit, but not completely.

A quick game of HL2 proved better than the music, but I still heard a very minute hollow sound. With some tweaking, your experience may be different. However, comparing the AV-710 to this one, I can’t say I am overly impressed. It’s a solid ‘starter’ sound-card, though.

This is one of the strangest looking mics I’ve ever seen, but it’s pleasantly cool at the same time. Though it has an odd design, it sits atop any monitor without an issue, including my LCD TV and my LCD monitor for my primary desktop. Though it doesn’t have anything to really keep it on place, it hugs the top of the frame so it should stay in place unless you bump the cord. I didn’t do any in-depth tests using this, but I found the sound quality to match my Turtle Beach headset from a few quick tests. No doubt a headset would sound better for gaming and the like, but for quick messages or late night webcam action, this should be great. If you can get by the odd design. No doubt people who come over will stop in their tracks over confusion when they spot it. 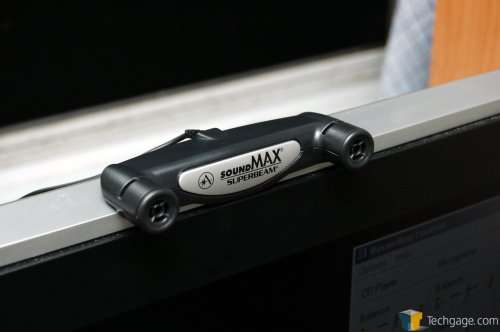 After installing the driver from the CD-Rom, there were no issues to speak of. Installation when great, and the ASUS WiFi software was ready to use. One feature I quickly liked is in regards to the WiFi base. Though it’s a rather odd looking design, it’s for a reason. The bottom is magnetized, so that you can set it atop your PC and it will stay there.

In the software, you will have full control over every aspect of your network, even moreso than the Windows Zero Config. However, if you choose to let Windows handle things, the ASUS app will mainly display information for you including the signal strength and speed. For whatever reason, the ASUS software would not properly connect to my network, while the Windows Zero Config would. This wasn’t without surprise though… my router gives me so many issues with WiFi that I only rely on it for a single PC. 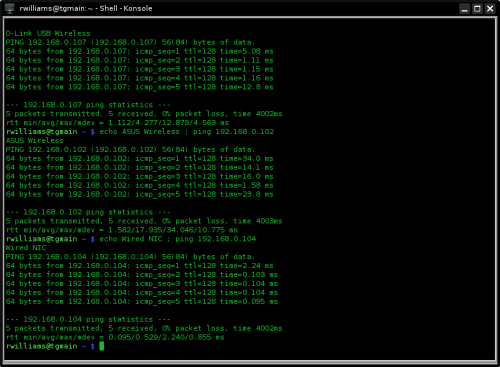 To give it a quick test, I cut off all internet connection to all the computers and pinged that one directly. For the tests, I used the ASUS WiFi, D-Link USB WiFi and a wired NIC. The results are seen above. The results are not too impressive, to say the least. Comparing the D-Link to this ASUS, the ASUS had far more latency than the USB adapter. Both adapters were sitting in the same spot during the tests. So, it’s a good adapter for regular use, but you would not want to be gaming over it… even on a LAN if you enjoy the lowest pings possible.

The last major addition to the board would have to be the chipset cooler. This is not a regular cooler though. It shares a trait of that mic… it’s strange. Looking at it, I do not understand how it is supposed to help. The fan spins around blowing air towards the chipset but the only place for the air to enter is on the opposite side. I would figure that the top of this cooler would be opened to allow air to flow in, but it’s not. 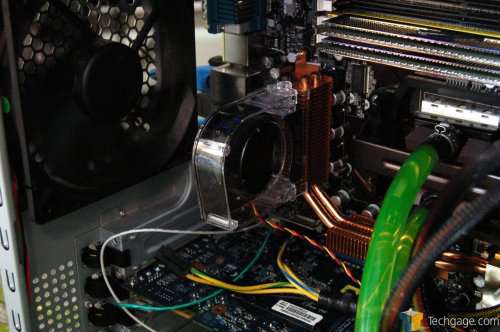 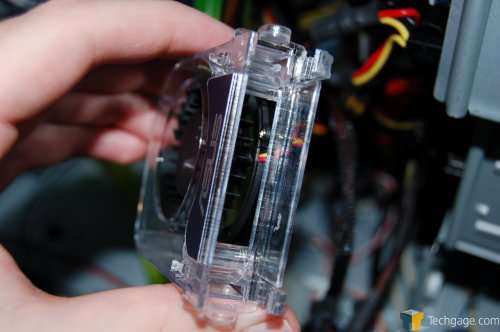 After adding this fan, the chipset temp didn’t budge… it stayed at 47°C. So the actual gain of this is debatable, but I’d recommend to not even bother. Though it’s extremely quiet, I fail to see a gain by using it.