I am not going to get too far in-depth regarding the board on Linux, because I didn’t get to delve into it as much as I had wanted to. Though this is a great board for Windows, you will need to take some extra steps to get full functionality on Linux. The first Linux attempt on this board was using Gentoo. After the boot sequence, the screen went completely blank, which is apparently due to an APIC issue. Booting with the noapic parameter fixes the problem perfectly. I ran into the same problem with SUSE (Pictured below) so I know it’s not a distro-specific issue.

Another oddity. I upgraded to the 704 BIOS, which is currently still in testing, and it fixed the APIC issue perfectly. I was able to boot back into the distro without specifying noapic in the grub. However, upon booting back into Windows, neither my mouse or keyboard worked! Strange enough, so I reverted back to the 603 release. I didn’t have any PS/2 converters for my keyboard to see if it was a USB issue, as they were packed away. 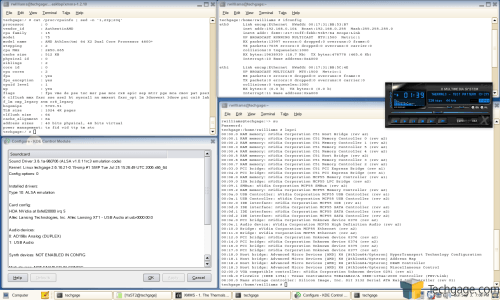 In the picture above you can see that things are detected properly. Even the audio worked without a problem… the USB audio also. I was not able to get the WiFi to work with common kernel modules. This isn’t to say it’s not possible, as I did not devote that much time to it. Besides this though, I had no problem with any other hardware on the board that I can think of. I did not touch the Firewire as I do not have any such devices.

Despite not having any comparison benchmarks in this review, I feel we got a good grasp of what the board has to offer. As mentioned, our future AM2 reviews will all have comparison benchmarks, but this was the first one received. Another is en route, so you can expect another motherboard review with such comparisons in the coming weeks. After it’s all said and done, I have to say I am quite pleased with everything the board has to offer.

When it comes to top technology, this board has it all. The board includes the nForce 590 MCP chipset, so we already have plenty of useful options simply because of it. One thing I enjoyed about the board immediately though, was the feature packed BIOS. I said the same thing about the Ultra-D last year, but this takes the cake. There is plenty of overclocking and tweaking ability in here. Enough to please the novice overclockers and the hardcore alike. There are many options available that I personally would never even touch.

In addition to that though, the extra features are a great addition. While the usefulness of the EZ Alarm depends on your lifestyle, the easy BIOS flashing is incredibly nice. Add to the fact that you can save and load profiles from a thumb drive… that’s a huge plus.

When it comes to the integrated peripherals, I don’t have immediate complaints. I did find the audio from my Chaintech AV-710 to be better than the onboard HD Audio, however. That’s saying a lot when the AV-710 costs less than $20. The mic is well designed though, and sounds quite good. Due to it’s unique design, it will sit atop your monitor with ease, which is a nice touch. As we found in our quick WiFi tests, there was nothing that impressive there. Paired against the D-Link USB Wireless, it was no comparison. While the D-Link hovered around ~12ms, the ASUS was above 30ms. That’s not the type of latency you will want for online gaming. It could be that it all had to do with my router or configurations, but both WiFi setups used default settings. 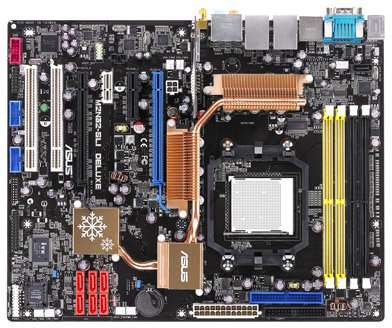 I haven’t a single major complaint about the board layout, though some minor things could have been altered to make things much better. The fact that the top PCI-E slot’s pull tab is so close to the many copper fins is a little strange to me. You will have to be careful when removing the card, unless you enjoy cutting yourself. Out of all the ‘minor’ issues though, I have to say the weirdest is the fact that the 4-Pin motherboard power is directly above the top PCI-E slot. This means that the power cord will lay on top of your GPU, and also made plugging it in difficult. If you decide to pick this board up, you will want to plug that cord in first prior to plugging in a card.

This board currently retails for around $200 even, and that is no doubt worth the price. This is a packed board, perfect for an HTPC, hardcore gamer or an overclocker. It delivers what the enthusiast is looking for, and even throws a few cool extras in there. I have no problem with highly recommending this board to anyone who is looking for an AM2 model in the $200 range. Even if you took out the WiFi and various extras, this board would -still- be fully worth the asking price. For that, I am awarding the M2N32-SLI Deluxe an 9 out of 10 in addition to an Editors Choice award.