Have a $1,000 budget for a new notebook? Look no further than the ASUS M51S. Touted as a multi-media notebook, it offers a 15.4" screen, 250GB HD and 3GB of RAM. Included also are 4 USB ports, DVI and VGA outputs, full numpad, fingerprint reader, a face-detection logon system and more.

ASUS is well-known for producing top-quality products, and as a result, their products tend to cost a little more than the competition. The M51S, however, is a little different. In the past, we’ve taken a look at two ASUS notebooks valued at close to $3,000, and to date, the least expensive model was just under $1,500. So I was surprised when I first received the M51S, as it’s priced right around the $1,000 mark. I immediately knew this was going to be an interesting product to test.

Before jumping into things, let’s clear up a few things about this model, and where it stands in relation to the rest of the ASUS line-up. First and foremost, the “M” stands for “Multimedia”. Some models will also have another letter at the very end, which in our case is “n”. There is an “r” version as well which includes an ATI GPU and faster processor. It retails for around $300 more than the “n” model.

Also, when ASUS releases a revised version of a notebook, they’ll add a revision letter and number at the end. Our model is -A1, which has just been replaced by the -B1. The primary difference I can see is that the processor has been upgraded from a 1.66GHz offering to a 1.83GHz one. Both notebooks appear to have identical pricing, so it’s something to be on the lookout for.

To make things a little more confusing, ASUS also has M50S notebooks, and despite the lower number, it’s a higher-end offering. The M50S notebooks have better specs overall and some include a Blu-ray drive for high-def movie viewing. These retail for around $400 more than the M50S.

ASUS designed the M51S for those who want a capable multi-media notebook at a great price. In the case of this exact model, the SRP is $1,029US (~$1,059CAN). Comparing the M51S to other notebooks on the market, the ASUS proves to carry a small premium, within the ~$50 range. One Dell notebook, for example, had an Inspiron offering with similar specs, but cost $100 less. It also had a much weaker GPU, however. So all in all, this notebook is priced competitively. 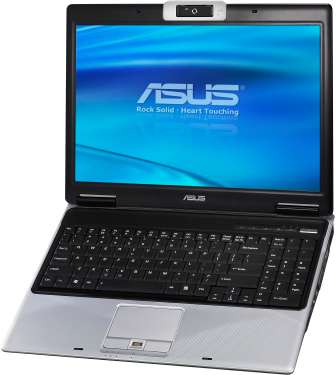 As mentioned above, though, the latest revision of this notebook includes a T5550, a similar offering but bumped up to 1.83GHz. As far as I can tell, the exact revision I am using would be discontinued, because all e-tailers I see, seem to be carrying the model with the faster processor. Given both are priced the same, be sure you are picking up the one with the T5550.

The M51S’ chassis is coated with a sleek textured black skin. It’s difficult to see the texture in the small thumbnail, so I recommend viewing the full image. 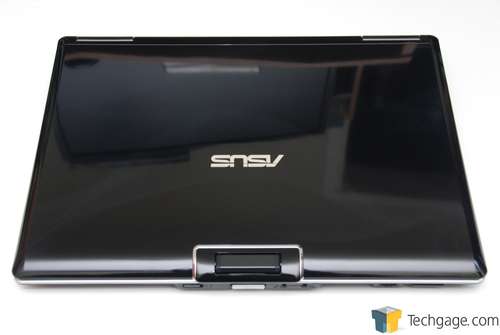 On the left side of the notebook, we have the Kensington security lock and also our DVD-RW drive. 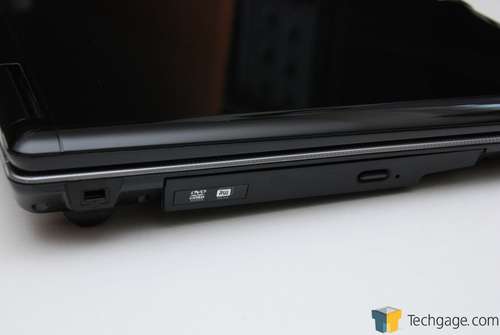 Most of the peripheral ports are to be found on the right side of the notebook. From left to right we have a USB port, IEEE1394 port, a seemingly empty port, TV-Out port, DVI-D, VGA and finally, modem and LAN ports. Not shown, to the absolute left of this side is an ExpressCard slot. 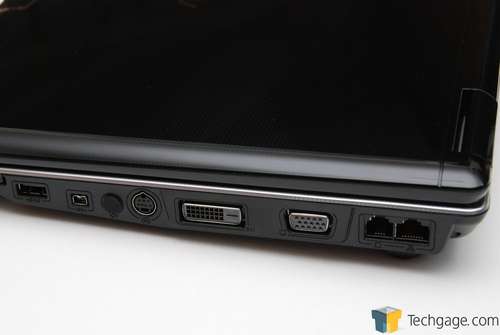 The “empty” port is one that confuses me, and by press time, I was unable to find an answer. In the manual, it’s referenced to as being an Antenna Input, but on “select models” only. This notebook doesn’t have a TV tuner card built-in, so I’m led to believe this is left empty (or plugged, rather), because it doesn’t exist. It might be upgradable later. Once I find out a definitive answer about this, I will toss an addendum at the end of the review.

In the back, we have a power port and two more USB ports. 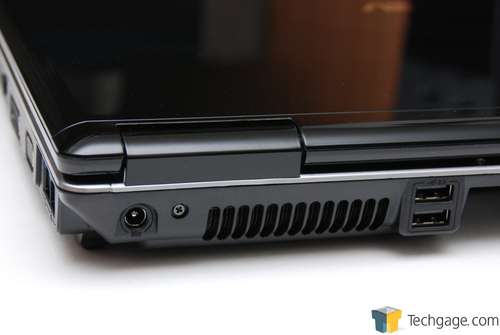 Finally, in front we can see a wireless LAN on/off, microphone and audio output ports and also the “Push” button to raise the cover. Though not shown in this image (another image later shows this), to the absolute right-hand side of the front is another USB port and also a multi-card reader. 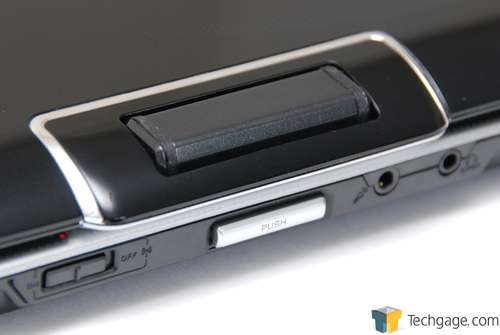 Overall, I have absolutely no complaints about the peripheral support or locations of the ports. The M51S includes not two, but four USB ports, support for both DVI/VGA and also a TV-Out. The only thing lacking is an HDMI support, but that’s moot given the fact that this is a ~$1,000 notebook.

One small complaint I have, is that the rubber bands around the web cam, as seen in the above photo, have the potential to come off if pulled out of a stuffed notebook bag or backpack. It didn’t happen to me on this particular notebook, but has on a similar ASUS notebook in the past. As long as you don’t yank the notebook out of a tight bag (so that it rubs tightly against books or something else), it shouldn’t be a problem. If they do come off, they easily fit back into place.