by Rob Williams on October 22, 2007 in Motherboards

We took a look at the Blitz Formula and Extreme boards from ASUS just over two months ago, and now we have the X38 version of those boards on the bench today. In addition to featuring a Northbridge waterblock, it also has “extreme” overclocking ability and a great bundle.

With Intel’s X38 launch just a few weeks ago, supported motherboards have been popping up all over the place, including five from ASUS alone. We’ve already taken a look at Gigabyte’s GA-X38-DQ6 and will also be taking a deeper look at ASUS’ own P5E3 next week, but for now we are going to focus on their highest-end offering, the Maximus Formula Special Edition.

Being a part of ASUS’ own Republic of Gamers series, we know that this board should serve its purpose of being a superb gaming motherboard and also one that caters directly to enthusiast overclockers. Later, we will be taking a look at the BIOS, where that fact will become even more obvious, thanks to tight tweaking ability and generous voltage possibilities.

Like all X38 boards, the Maximus Formula supports 45nm processors that are due out in a few weeks, in addition to FSB1333 support. Some motherboards, this one included, also support 1600FSB processors, though they will not be available until early 2008. What X38 also brings to the table is 16x Crossfire support, but we will be unable to test this due to lack of available ATI cards.

Because this is a RoG board, ASUS packs in the bling and makes sure enthusiasts are satisfied. Aside from the extreme BIOS options, an LED BIOS poster is included as well as 3DMark 2006 and also a copy of STALKER, a game that ASUS has been proud to sponsor.

The Maximus has identical packaging to what we saw with the Blitz. The difference of course is the features list and the name. Everything else is quite similar. 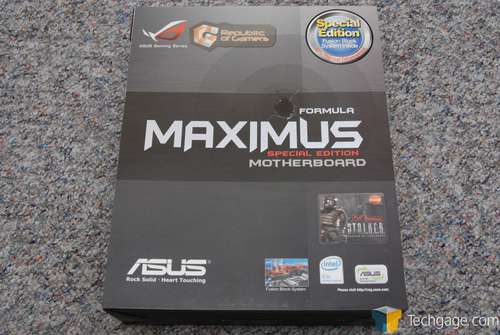 Many of the extras have been covered already, but in the picture below you can see the various cables, water loop supplies (including 1/2″ to 3/8″ converters) and also a small fan that can be clipped on a portion of the heatsink for even greater cooling ability. 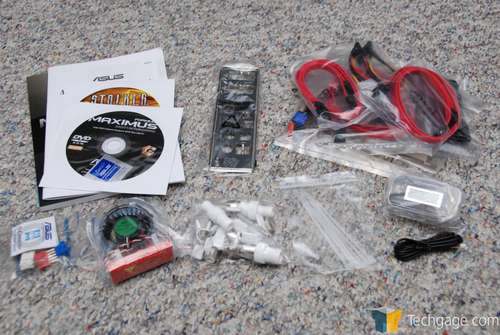 Continue onto the next page for a trip around the board itself.