Looking for a well-rounded notebook that won’t break the bank? That’s a lot easier to pull off today than it was a few years ago, and ASUS proves it with their N50Vn. For its $1,149 asking price, this 15.4″ notebook offers a lot for the money, including the ability to not only get your work done, but even get some gaming taken care of as well.

It’s been quite a while since we last took a look at an ASUS notebook, so when I was told that an N50Vn was en route for my perusal, I was looking quite forward to checking it out. The last few notebooks I’ve taken a look at have been value-oriented models, so they weren’t all too exciting. The N50Vn on the other hand, is still quite affordable, but packs more of a punch. It’s neither high-end or low-end, but somewhere in the middle.

That said, this notebook doesn’t really fall into a particular class (business, multi-media, gamer, et cetera), but given that it includes a speedy processor and capable graphics card, it’s probably safe to say that it’s designed for those looking for great performance at an equally great price, without ruling out the possibility of gaming on the go.

So while not considered a “gaming” notebook, it still delivers good mid-range parts that won’t stop you from getting your game on. Likewise, it also carries many multi-media elements as well, thanks in part to the built-in Altec Lansing speakers (no subwoofer though), and also an HDMI port. Hooking this up to your TV to play back HD content is something that could be done with ease.

Before we get to taking a tour of the notebook, I should mention that there are multiple variations of this particular notebook, with ours being the B1B revision. I’m unsure how many models in total there are, but when I had a quick look through one popular e-tailer, they had seven, and that might not even be all. So, if you are looking to pick up another varient of this model, you can still base your opinions off this review, but be sure to look closely at the specs to makes sure you’re not losing anything you want.

The N50Vn is, as the article title suggests, a 15.4″ model. It’s not that compact, but it’s a good weight (6.5lbs). It’s comprised of a two-tone color scheme, brown/black, with a modern artsy design on the hood. The scheme as a whole might not be for everyone, but I can attest to the fact that these pictures don’t really do the notebook complete justice. It looks better in person. 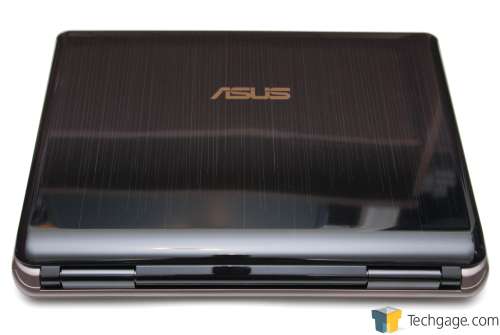 Thanks to the larger form-factor, the notebook features a full set of keys, and also a numpad. The addition of a numpad seems simple, but it’s much appreciated by those who often take advantage of the Windows’ calculator, or need to deal with spreadsheets on a regular basis. It could also improve interaction with certain games that are built around using it. 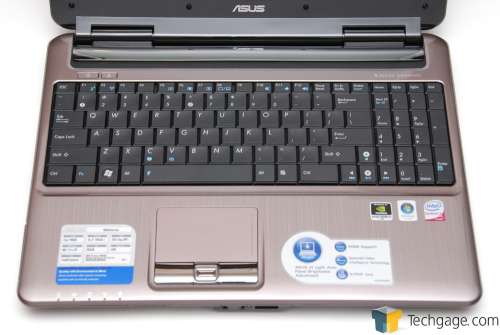 Speaking of a “pad”, the touchpad is one of the better ones I’ve used in a while. The pad surface itself is smooth and easy to use, and doesn’t heat up too much after long periods of use. The buttons are protruded outward, and are easy to push during normal use. Also included is a fingerprint reader, which you can use to log onto Windows without the need of a password. 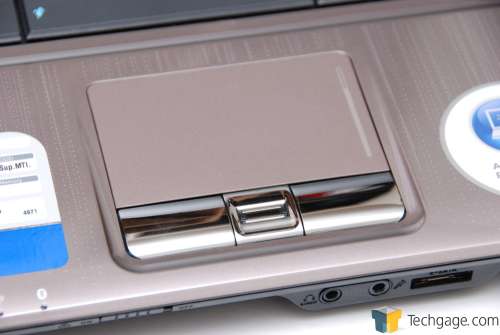 The keys on this notebook are a little different than what I’ve seen before. They’re for the most part flat, and somewhat resemble Scrabble pieces to me, for whatever reason. They are very easy to push though, and incredibly quiet. When it comes to keyboards, not everyone is going to like the same model as everyone else, but I can honestly say this is one of the best mobile keyboards I’ve ever used. 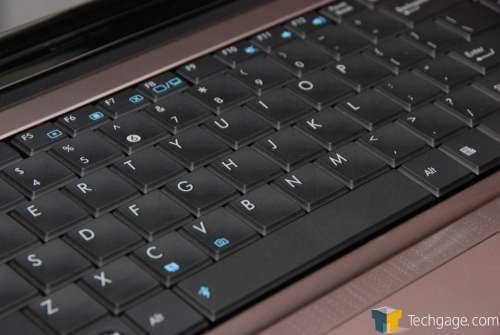 In the top-left corner, we find the power and… lightning bolt buttons. The former of course turns the machine on, while the latter button summons Zeus, who will keep you company during the boot process. If ASUS forgot to add that functionality to your particular notebook, then this button will default to either starting up the Splashtop Linux environment (when the notebook is turned off), or Media Center if you are inside of Windows. 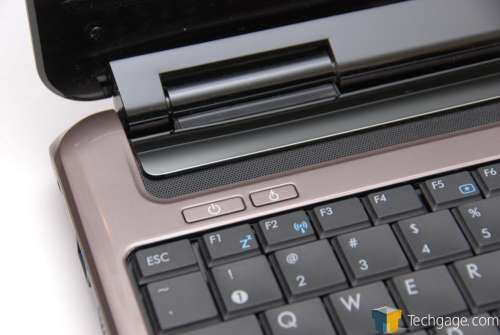 As you would expect, this notebook includes a web cam – a 2.0 megapixel offering. This is actually one of the better web cams I’ve used. It works rather well in low-light, which is a huge plus. 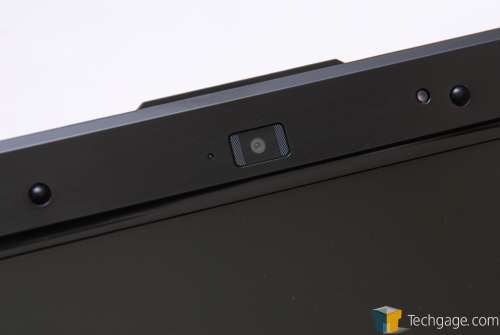 Taking a look underneath, we can see the various air-holes placed liberally, and also the various removable compartments for hardware swapping. Instead of just explaining what goes where, let’s move right along to the next photo to help explain it much better… 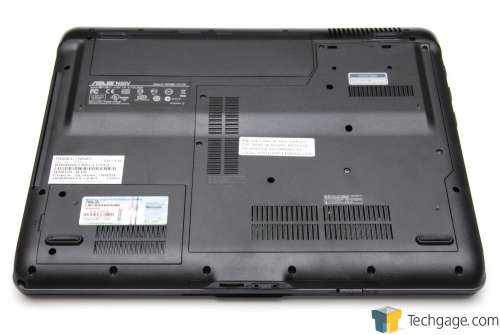 One thing that surprised me on this notebook is that the battery isn’t exposed once installed. It fits inside a compartment and then is hidden with a cover. That not only improves the look of the notebook, but can also protect the battery from accidental spills. Of all the components, the easiest to swap would be the hard drive and RAM. The hard drive was actually the easiest to access of any notebook I’ve ever touched. It’s secured into place with the help of the cover, so once that’s removed, you can simply lift it out.

With more effort, the CPU can likely be accessed and removed, but it would no doubt be a tedious chore. I’m also assuming that not too many would be interested in taking that route, even a few years down the road. 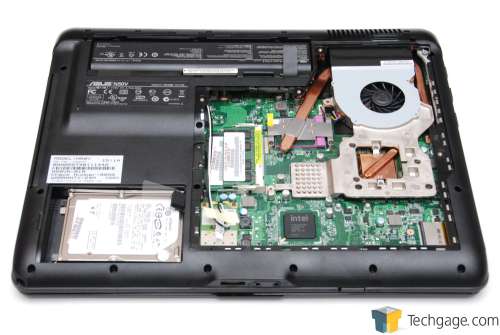 All that’s left to check out is peripheral connectivity, so let’s get right to it. In the image below, we show the three main sides of the notebook (nothing is on the back), so we’ll work from the top downward. The first angle is the front of the notebook, and there we can find the audio jacks and also an e-SATA port. I find that this is an odd spot for that to be located, but at least the notebook includes one at all. Also here, to the left, is the WiFi enable/disable switch. 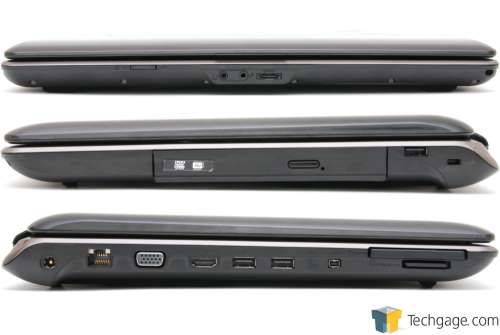 On the right side of the notebook, we can see the ODD and a single USB port. There’s also a Kensington security lock to the right-most section of that side. The left side is where most of the good stuff is kept. From left to right, we have the AC power, LAN, VGA, HDMI, 2x USB, FireWire (4-circuit), ExpressCard slot and also a memory card slot.

This notebook is the first I recall seeing in a while without a modem port, so if you rely on one, this might not be the model for you. If you don’t mind using an add-on, then you could easily use a USB modem adapter. The same also applies for the lack of a DVI port. If you need one, you could use an HDMI-to-DVI or VGA-to-DVI adapter to help get the job done.