As mentioned earlier in the review, the P5E3 Premium features a rich BIOS, filled to the brim with overclocking potential. Considering it’s not a board catered to overclockers, it’s impressive just how much ASUS managed to fit in here. That’s only a good thing. Those who have no desire to turn all the dials don’t have to, but those who do want to will not be held back.

I mean ‘not held back’ literally. Using the Core 2 Duo E8400, I managed to hit 500MHz FSB with absolute ease. In order to achieve that figure, I bumped the northbridge to 1.55v, while all others were left at defaults. Although I haven’t done long-term testing on this setting, four hours of SP2004 passed without error, along with a 3DMark Vantage triple run.

Pushing even further though, I found 525MHz to be attainable, although due to time constraints, I haven’t been able to find if it’s truly stable. This was only achieved by bumping the NB voltage to 1.57v. 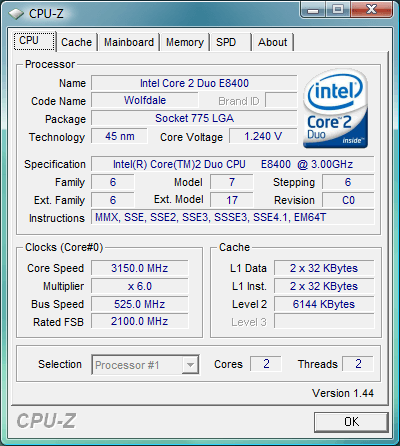 Using the same Quad-Core QX9650 that we used during testing, I couldn’t go beyond 470MHz FSB. That was stable, however. Going higher wasn’t. Moving to the Dual-Core took the virtual cover off the pot though, as I hit 540MHz with ease, though obviously not stable. This board has huge overclocking ability… it’s just up to you to find its sweet spot.

In my tests, this board is incredibly fussy with voltages. While 500MHz FSB was stable with 1.55v, it wasn’t at all with 1.59v or 1.51v. This becomes even more true going higher. You will need to spend some time changing the NB voltage value and seeing where it gets you. It may vary from CPU to CPU, but it’s a given that a Dual-Core will allow you to hit the highest possible FSB on the board.

So while I don’t have a conclusive figure, I do know 500MHz was stable during my tests, and the board’s very willing to go higher. 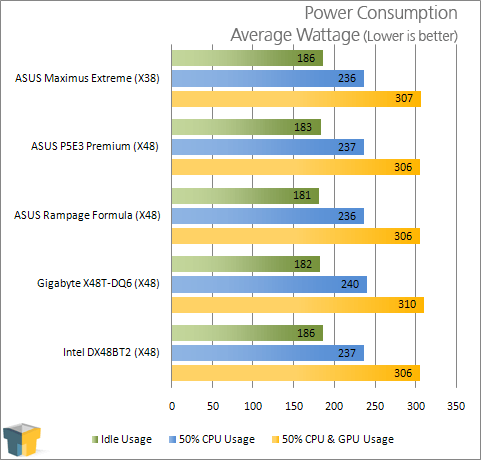 The boards all performed well here. The P5E3, even with it’s WiFi adapter, didn’t manage to suck down extra power when compared to the other boards. The beefiest board looks to be Gigabyte’s X48T-DQ6, but all perform too close to one another to actually have a winner.