As I mentioned on the first page, it doesn’t make sense to outright recommend this board because it costs $375 US on average. If it had a specific reason to be that expensive, it would be one thing. But the fact is, this board includes the X48 chipset as opposed to X38, so that 1600MHz FSB ‘native’ ability costs you a cool fifty bucks. P5E3 Premium, indeed.

On the other hand, it’s impossible to not like this board. It’s feature-packed as mentioned, very overclockable, proves to be efficient and looks great at the same time. The fact that it includes WiFi is a huge bonus as well, especially since it follows the 802.11n standard.

So you want a QX9770, does that make the Premium board worthwhile? If for whatever reason you don’t like overclocking at all, or even thinking about it, then the board might be for you. However, there’s no reason to be afraid. I ‘m pretty confident that plugging a QX9770 into a P5E3 Deluxe would boot up just the same. It’s a 400MHz FSB processor, so the board would have no choice but to default to that. 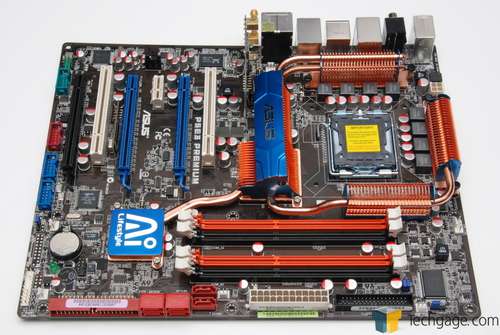 There’s just no way to sugar-coat this. A $50 premium is far too high given what the board offers over the Deluxe, which is support on paper for 400MHz FSB, a feature that affects only those who plan on picking up the QX9770 processor. For those who are overclocking, what does it matter what’s natively supported? The point of overclocking is to push hardware beyond the rated spec.

What you can take from this is that the P5E3 Deluxe is a fantastic board. In fact, I liked it so much, that when I reviewed it in December, I awarded it with an Editor’s Choice award. All things considered, the board we looked at today is no different, except that it supports a 1600MHz FSB and contains a blue heatsink guard.

Part of the premium is not ASUS’ fault, as I’m sure the X48 chipset costs a premium to acquire, but no other X48 board comes close to this price. MSI, Gigabyte and DFI all offer their boards at $300 or less. Even ASUS’ own Rampage Formula (which we will be reviewing soon) costs $300.

That aside, one feature I didn’t get into that ASUS talks a lot about is the EPU, a chip based on the motherboard that aides in better power consumption. Part of the job is handled by software, but for some reason the AiSuite would not run in our Vista 64-bit, so I was unable to test it for this article. I am inquiring with ASUS as to why this is the case, as it should work.

Overall, the P5E3 Premium is a great board rich with features, but the price holds it back from being highly recommended. It’s the most expensive of all X48 boards, but shouldn’t be if ASUS hopes to have it compete.