Since this is the first P35 board I’ve had the chance to really spend some time with, I wasn’t able to offer great comparisons. There will be more P35 board reviews in the near future however, so stay tuned. After spending the past two weeks with this board, I have to say I am impressed.

Aside from the DDR3 “benefits”, this board is packed. It offers plenty of overclocking ability, has a solid cooling system and is rock solid in the performance department.

I have no immediate complaints about the boards layout, although I do wish the copper cooler was not so close to the DIMM slots. If you have ram with a fat heatsink, it will likely touch this pipe. That by itself shouldn’t cause any problems, but I’d rather never see that happen. I also have to wonder why the two PCI-E 4x slots are on the top.

As it stands, if you use two dual slot GPU cards, you only have one PCI slot to deal with. If those PCI-E 4x slots were a little lower, you’d be able to save at least two. Why is it the PCI-E 4x slots always have plenty of room, when they are the most likely to go unused? 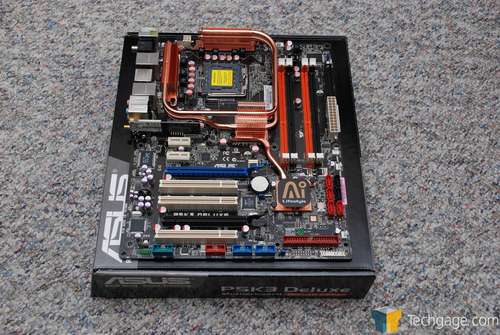 Other than that, the layout is fine. Some might consider the 6 S-ATA ports to be a little skimpy, but those will likely be few. That’s enough for four hard drives and two CD-roms, or a combination of the both. They are positioned well… out of the way and within reach of all the drives.

As far as overclocking goes, this board also performed well in that regard also. I managed a stable DDR3-1500 8-8-8 overclock with the Kingston DDR3-1375 kit, and also a 3.6GHz overclock with the E6600, although that was not 100% stable. For FSB, this board seemed quite stable up to 475FSB. If you are not afraid of voltage, you should have no problem achieving some nice overclocks with this board.

For the $250 price tag, this board offers quite a bit to the consumer. As I mentioned, I did not have another board for comparison, but I was very impressed with my experience. The P5K3 Deluxe packs in great functionality, many useful software and BIOS features, WiFi built-in and a lot of overclocking headroom. If you are in the market for a P35 DDR3 board, I wouldn’t hesitate recommending this one. I am going to award the P5K3 Deluxe WiFi-AP an eight out of ten alongside our Editors Choice award.