When we had taken a look at the P5K3 board last week, we were not sure whether it was the new Intel P35 chipset that was helping it top out each chart, or if it was the fact that the DDR3 memory was faster. After benchmarking with this board, I think it’s safe to say that it was a combination of both.

Throughout most of the tests, namely gaming, both P35 boards performed exceptionally. However, while both boards topped out most of the charts, the P5K3 always inched past the P5K, which I assume to be thanks to the faster memory frequency. Even though the DDR3 had more loose timings, the extra frequency is all that mattered.

But, even compared to the XBX2 and eVGA 680i boards, which ran components at the same speeds as the P5K, they seemed to be no competition. In some cases, the XBX2 proved the better board for certain multi-media tests, but the P5K picked up the slack elsewhere.

Performance aside, the P5K also has a nice feature-set. It’s Crossfire ready and includes a good supply of PCI slots for your audio cards, PhysX or other add-ins. However, if you are planning to use dual GPU that happen to also have dual slot coolers, then it will deem two of the PCI slots unusable. To prevent this, ASUS could have shifted the useless PCI-E 1x slots in the place of the two PCI slots that you will be wiping out. I don’t know a single person that has ever used a PCI-E 1x slot. 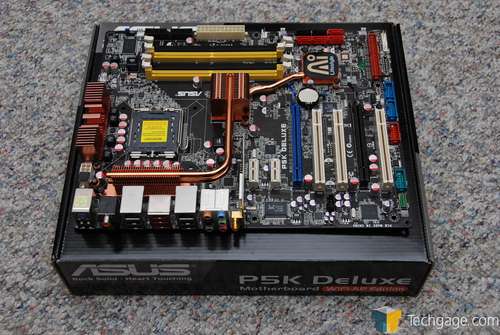 Other than that fact, the board layout is great, with the exception of that ugly top copper heatsink, which doesn’t match the others on the board. “Damn you are picky”, you say? Yes I am. This board doesn’t have that many faults that I can find, so I had to mention something.

The included WiFi card is another large bonus, as it works very well. Throughout my testing, I have found it to be more reliable than previous WiFi cards I have used. The BIOS is yet another quality showing from ASUS. One thing I love about their BIOS’ is that they allow you to flash using a ROM file on your thumb drive, as well as allow you to save and restore overclocking profiles that way as well. It seems so simple, but is so helpful at the same time.

Compared to the P5K3, the P5K retails for around $30 – $40 less, but essentially offers the exact same performance. The P5K3 only has an obvious advantage because the stock memory was running at a higher frequency. That said, $225 is well worth the cost of this board if you are looking for one that’s feature-rich. There is a non-deluxe version of the board available for $150 on average, but it lacks WiFi, a PCI-E 1x slot, two S-ATA ports among other things. I am also unsure whether you could expect the same performance as seen in this review. In the end, I’d easily opt for the Deluxe version because it’s complete.