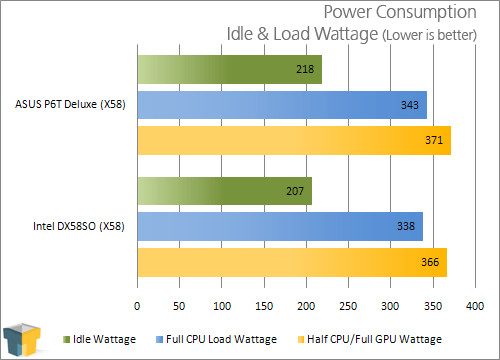 Not surprisingly, Intel’s DX58SO board consumed less power throughout all of our tests, but the differences at full load are much tighter than at idle. The increase in consumption on the ASUS board can likely be blamed for a few different reasons, but the fact that the board includes 18 power phases probably doesn’t help things too much.

Despite the fact that Core i7 just launched, the competition where motherboards are concerned is rather tight, with eight motherboards from five different manufacturers being immediately available, two being from ASUS. Though I can’t speak on behalf of all the launch boards, I have little doubt that the P6T Deluxe is a superb choice for your Core i7 build.

The first important factor is the price, which at $299, sits in line with all of the other launch boards. Like all of ASUS’ Deluxe boards, this one includes many features targeting both the consumer and enthusiast, in addition to a great design, huge peripheral connectivity abilities and overclocking potential that should please almost anyone. 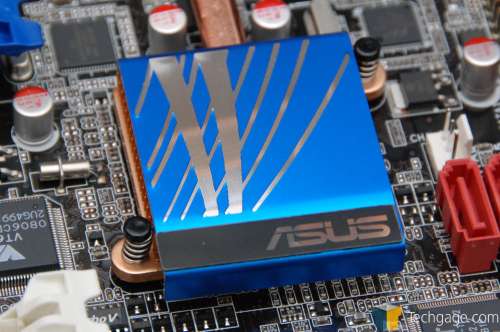 The fact that the board handled our Core i7 920 stable at 3.60GHz is enough for my thumbs up. I didn’t expect to see that speed stable on that CPU at all, but it was possible here, and with stock voltages no less. Although the cost of entry into Core i7 isn’t going to be cheap to start off, the overclocking-ability exhibited here should appease some of the pain.

In the coming weeks, we’ll be delivering more X58-related reviews with boards from ASUS, Gigabyte and hopefully others, so stay tuned. As it stands though, ASUS did a superb job with their P6T Deluxe, and I can confidently recommend it to anyone who is looking to build an i7 machine and can’t decide amongst the launch lineup.