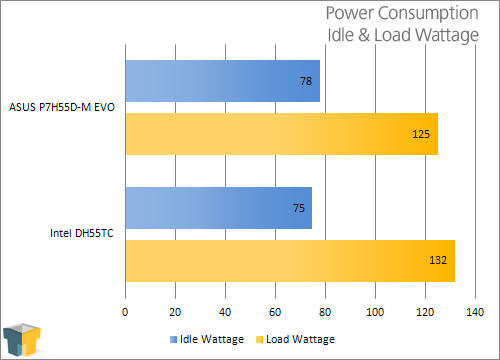 It’s not too often we see a system draw such a low amount of power, but thanks to the fact that we’re dealing with both a dual-core CPU and integrated graphics, our machine idles at well below 100W. Interestingly enough, even though the Intel board is rather barebones compared to ASUS’, it drew more power at full load. That certainly looks great on ASUS.

By this point in the article, you’re likely already aware of what I’m going to say about each motherboard, but for the sake of writing a “Final Thoughts” that’s longer than 20 words, I’ll explain my likes and dislikes here. First up is ASUS’ P7H55D-M EVO, a board that costs a bit more than typical mATX offerings, but has a good reason to. I’ve spent many hours with this board in particular, and I have no immediate downsides to mention.

As far as mATX boards are concerned, this one from ASUS is about as packed as they come. There are 6 USB ports found on the back, alongside FireWire, eSATA, 8-channel audio, et cetera. If anything at all could be considered lacking, it may be that DisplayPort is not found here, neither is SATA 3.0. But as mentioned in the intro, with SATA 3.0 offering rather minor benefits to the end-consumer at this point in time, its omission is no big deal.

One sweet perk is the addition of USB 3.0, so should you be investing in such devices in the near-future, you’ll already be good to go. This is especially important on a motherboard where PCI-E expansion may not be that feasible down the road. Aside from overall connectivity, the P7H55D-M EVO is simply a well-designed and well-rounded motherboard. I have no major qualm about the layout that ASUS designed, although there are just two minor things I would have liked to have seen. 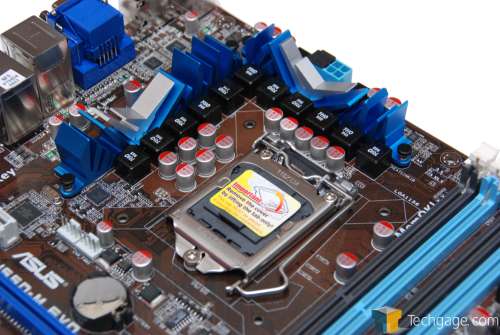 First, is just one additional fan header. It seems a little greedy of me to complain, given there are three, but with one located beside the memory slots, we could assume that some people may choose to use a RAM fan. The other two headers are located right under the CPU cooler, one for the CPU cooler itself, and another for a chassis fan. If there was just one more header, then two important chassis fans could be taken care of, the front and back.

The other minor complaint is the lack of vertically-mounted SATA ports. The reason ASUS chose to omit those is obvious… room had to be made for an IDE port. But, I can’t help but think that most people would prefer to see an IDE connector gone and vertical SATA ports instead.

ASUS’ board retails for around $130, and at that price, I wholeheartedly recommend a consideration. It may cost a bit more than other mATX boards, but it’s packed with features, includes a wide-range of ASUS software (none of which we looked at in this article), has major overclocking potential and a great layout. There’s nothing to truly dislike.

While ASUS’ offering above seeks to please those who want a truly robust motherboard for their home PC or HTPC, Intel’s board targets a slightly different audience; one that wants a stable board at a great price. In the case of the DH55TC, the retail price is $100. What you get for that is a clean-looking board that, like ASUS’ offering, features a smart layout and lots of functionality.

The board doesn’t feature quite as much functionality as the P7H55D-M EVO, but that’s to be expected for a board that costs $30 less. From a performance standpoint, the DH55TC delivers, and despite the fact that we were forced to use loose memory timings, our benchmarks weren’t affected to a great degree. Unfortunately, the DH55TC doesn’t feature DisplayPort either, which I find a little strange given that Intel is pushing the technology so greatly. 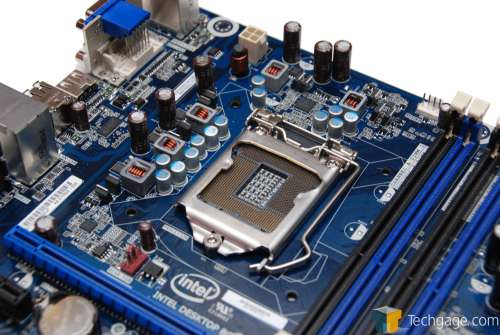 As much as I would like to be able to heartily recommend Intel’s board, at its current price, it’s pretty difficult to. If the board was closer to $85, it would be a no-brainer to recommend it, but at $100, the competition is far too tight. On one e-tailer, for example, there’s a Foxconn H55 motherboard (H55MXV) that’s quite similar to Intel’s, but it costs $14 less. Or, for $5 more, there’s a Gigabyte offering (H55M-UD2H) that is in all regards a better choice. Plus, there’s the fact that Intel’s board allows almost no overclocking, which Gigabyte’s would.

In my review of Intel’s DP55WG from a few months ago, I came to very similar conclusions. I like Intel’s boards for certain reasons, but for the price they’re being offered at, it’s almost impossible to settle on choosing one over the competition. I’m not really sure why Intel charges a premium on its boards, but I truly believe it hurts the sales, because it only takes a quick look at an e-tailer to understand that competition is much too fierce.

So while I can’t outright recommend Intel’s board over another, one thing’s for sure… if you want a no-nonsense offering, the DH55TC isn’t going to be a poor choice. I just wish the price was at least $10 – $20 lower, so I could feel more inclined to recommend it.