For some reason, ASUS didn’t include the TurboV EVO overclocking tool as it had with the P7P55D PRO, and it’s unfortunate, as it was quite nice. For those who might not have caught that article, why the program rocked is that it didn’t give you some wimpy overclock, but something really impressive. It might not have been entirely stable, but it certainly wouldn’t be far off the mark.

With this board, ASUS included Intel’s Extreme Tuning application instead, which is fine, but it’s not near as nice to deal with as the TurboV EVO, and for the most part, it’s a lot more manual. For anyone wanting to get a decent overclock out of the machine, the painless way is to just stick to the BIOS. If you’re not into the whole overclocking thing, then just choose a preset. If you want to go higher, then the option is there. 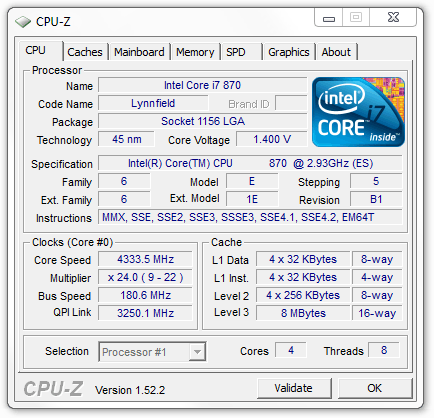 As mentioned many times before, I can’t seem to accomplish a truly impressive stable overclock lately due to heat, so I primarily wanted to find an overclock that would remain stable through a few runs of Cinebench, and here, that sweet spot was 4.33GHz. We didn’t quite hit the 4.4GHz that we managed on Gigabyte’s P55A-UD4P, as no matter what I did, Cinebench would error on each launch. But bringing things down a few notches smoothed that out.

I should stress that I really don’t recommend the settings I used to accomplish this, because most of it was in the red (as in, dangerous). One example is the 1.45v CPU voltage. Hopefully you’ll be able to achieve just as impressive an overclock, but just with a little less juice.