When I began testing Intel’s Lynnfield-based processors a couple of months ago, there were two motherboards that kept my attention during the process. Of those, one was Gigabyte’s P55-UD5, already reviewed, and ASUS’ P7P55D Pro, also known as the one being discussed here. The reason for delay for this review isn’t too important, but it comes down to the fact that after the initial Lynnfield content was finished, our CPU cooler’s mounting bracket was rendered useless.

This seems like a simple problem, because getting a replacement should be simple. In this case, it wasn’t, and it took more than a month to finally receive what I sought out for. Had I known in the beginning just how long it was going to take, I would have looked at other options, but lesson learned. Now we have what we need, and we’ll be looking at many more P55 boards in the months to come.

Because I benchmarked this motherboard months ago, the performance data shown throughout the review has been borrowed from our aforementioned review of the P55-UD6. The reason I held off on posting a review had to do with overclocking, and overclocking only. Obviously, there’s not much overclocking headroom with Intel’s stock cooler, as you’d expect, so I wanted to wait for our replacement Thermalright MUX-120 to show up.

In addition to the performance results, images and general information on this page has also been borrowed from a preview we did prior to Lynnfield’s launch, with some modifications. So without further ado, let’s see what ASUS’ P7P55D Pro is made of from a feature’s standpoint.

When Intel launched its Lynnfield processors, ASUS wasted no time in unveiling its fleet of P55 motherboards, nine in total. That number has since increased, but most aren’t full-fledged brand-new models, but rather revisions of what’s been out there. One exception is the addition of the WS SuperComputer, a board that focuses on the high-end aspect of P55, bringing back full PCI-E 16x multi-GPU graphics to the platform, thanks to NVIDIA’s NF200 chip. 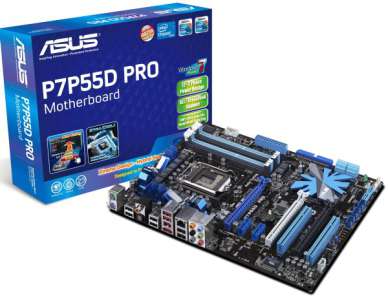 Since ASUS’ initial P55 boards were launched, prices have gone down on all of them by at least $5 or $10 (based on current Newegg pricing). The model I’m looking at here, the Pro, sells for $170, and as such, it’s placed in ASUS’ “mid-range” category. This means that the board isn’t overflowing with bling and seemingly unnecessary features, but it delivers just what the enthusiast is looking for, along with ample overclocking ability.

Some select ASUS P55 motherboards have experienced S-ATA 3.0 upgrades, such as the Premium, but the Pro has been left alone. Given the infancy of S-ATA 6, and the overall lack of drives in the marketplace, not to mention the fact that even SSDs can’t generally exceed the available bandwidth of S-ATA 3Gb/s, this isn’t a major, or even a minor concern at the current time.

ASUS doesn’t believe in shipping out plain Jane motherboards, but rather aims to deliver a quality set of features that can prove useful to anyone using the board. One of the major features with this and select other ASUS motherboards is the TurboV EVO hardware and software overclocking feature. I’ll touch on this later in the review, but let me say now that this is an overclocking tool done right. 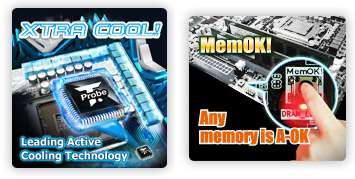 In addition to that, there’s also a robust power phase solution, 12+2 (the +2 is dedicated to the integrated memory controller), along with T.Probe, a hardware solution that monitors the effectiveness of currently-used phases. If the computer is under high load, it’ll work to spread it across as many phases as it deems necessary to increase both stability and power efficiency.

Another cool feature is “MemOK!”, yet another hardware solution that helps make memory issues a thing of the past. If the RAM kit installed fails to allow the PC to boot, pushing the MemOK! button the motherboard will force modest settings to allow the board to boot, and in turn, let you into the BIOS to manually set stable settings. All of this and more is included on the motherboard, and I recommend that if you want to get to the nitty gritty of it all, then you take a look at the feature page on ASUS’ official product page.