One thing that separates ASUS’ recent boards from the rest is the TurboV EVO overclocking software. I often shun overclocking software, because it takes far longer to achieve a decent overclock with than it would if you just went into the BIOS and took care of it yourself. And then there’s the problem of the software “auto-tuner” simply taking too long, or wimping out after a measly 5 – 10% overclock is achieved.

ASUS wants to change opinions with TurboV EVO, and do to so, its created a special chip on the motherboard that interacts with this software directly. During the process of tuning, it checks in to make sure voltages and temperatures are in line, along with stability. As it increases the BCLK and other things, it will re-test using an internal stress-tester to verify stability. If everything checks out, it will continue going until the PC crashes. 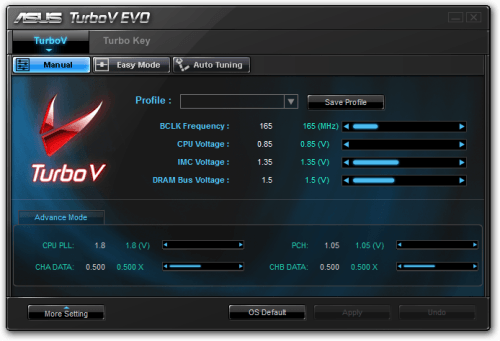 During the process of auto-tuning, nothing else can be done on the PC as the software takes over the entire screen. As it does its magic, you can sit back and enjoy the show. There are many animations and cool-looking effects that adds to the overall appeal of the tool. I believe this is the first ever piece of ASUS software that has impressed me where aesthetics are concerned. I mean, just look at it! 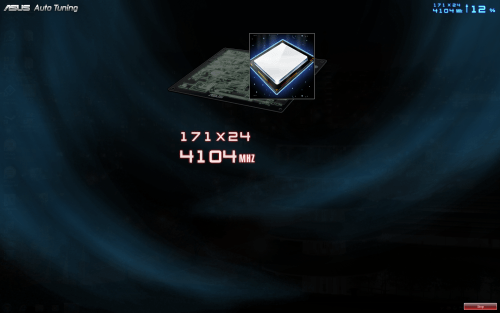 There are three options to choose from for the auto-tuner, with the most interesting being “Extreme Tuning”. With the CPU at stock speeds, I went ahead and let the program do its thing, and after a reboot, it told me that a 33% boost to the CPU was a success, from 2.66GHz to 3.88GHz. That’s what I call an overclock! 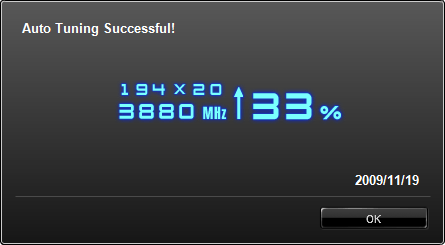 After that clock was established, TurboV EVO attempted to go even further, but going higher was just out of the question, so it left me with the overclock seen above. If my temperature situation was better, I’m confident it would have gone even higher, but any way you look at it, 3.88GHz for no effort whatsoever is nothing to scoff at!

Ignoring TurboV EVO entirely, the process of overclocking with the P7P55D Pro is an absolute breeze, thanks not only in part to the exhaustive number of BIOS tweaking options, but also because the board can handle a lot of pain. That said, I haven’t quite settled on a top-end stable overclock, just because the CPU got far too hot. Your situation might be different, where an even higher overclock will prove cooler. It depends on not only the CPU cooler itself, but the ambient room temperature as well.

Like the only other P55 board I’ve overclocked with so far, Gigabyte’s P55-UD5, I reached a stable overclock of 3.70GHz with ease, but I wanted to go further, and see just how high I could push things while putting up with the near 100°C temperatures. One result is below. Yes, that’s 4.2GHz. You can click on it to see that it was stable enough to handle a couple of runs of Cinebench, with very nice scores. 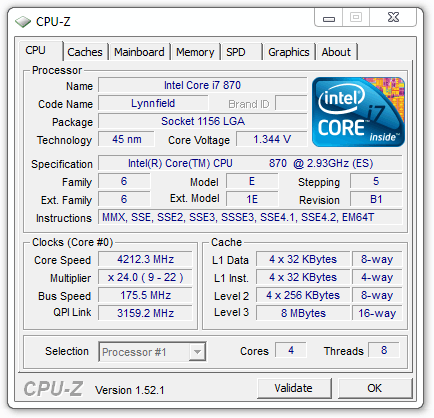 This might not be an ultra high-end board, but it sure has proved itself where overclocking is concerned. If temps weren’t an issue, I might have even gone further, because as stable as it was at 4.2GHz, I can tell that some headroom remains. But as it is, 3.70GHz (185MHz x 20) proved LinX stable on our Core i7-870, which is still a great overclock. If temps don’t get in your way, I have little doubt you’ll push well beyond that.