When ASUS unloaded their PG221 22-inch gaming monitor on us, we were told to expect great things. In fact, we were told straight out that we would “love it”. Of course, all companies will tout their own products as such, regardless of how great they actually are. But, being ASUS, I trust their judgement and looked forward to tearing it out of the box to see what made it unique.

I was in for a shock. More often than not, when I receive a new product for review, I don’t peruse marketing material beforehand unless it’s a product that requires a time-sensitive review. That said, I didn’t know what to expect from this monitor, but… I guess you could say I was “blown away”.

You see, what makes the PG221 unique is not the nice styling, not the 2ms GTG (albeit a nice feature) or even the great connectivity. No, what makes the PG221 unique is a huge subwoofer extruding from the back. ASUS calls this a “gaming” display, and they mean it. The PG221 is designed to be an all-in-one display, complete with competent speakers that will sound amazing with either a PC or a game console.

I’ve mentioned in previous reviews that ASUS is a company I tend to respect greatly. We’ve taken numerous products of theirs for a spin and have never been left with a bad taste in our mouth. The closest we’ve come, in fact, has been another monitor… the only other ASUS monitor we’ve ever taken a look at, the PW201. Although it had superb image quality (I still use this monitor on a daily basis) and smart styling, there were a few lingering problems that kept the score to a 7 out of 10. How will the second ASUS monitor to hit our labs fare?

Whenever I receive a new product to review, the first thing I check is the average retail price. For one, this helps me distinguish what market segment a product is targeted towards and also tells me what to expect in terms of quality. Therefore, if a product doesn’t live up to the expectations sought out from such a price range, the overall score will be chosen accordingly.

That said, I almost lost my socks when I found out that the average retail price for the PG221 was $550 USD. That’s a full $200 more than the recently evaluated Samsung 2232GW, which I already found to be slightly expensive. How ASUS plans to make up for the higher price though, is with pure quality. The important question is whether or not they managed to pull that off, and it’s one we will answer before the review is through.

From a technical standpoint, this display delivers some great numbers, including 2ms GTG and a huge 2000:1 contrast ratio. As is standard of most 20" – 22" displays, 1680×1050 is the native resolution. The monitor doesn’t have a large gamut to boast, but it does have a sufficient brightness of 350 cd/m2. During all my use with the PG221, I never found the monitor to be too dim or too bright – it was in a sweet spot.

This display can also tout better connectivity than most others, as DVI-D, VGA, composite, S-Video and component are all included. The obvious omission is HDMI, which would have been great to see offered, considering both current-gen consoles feature the connection.

Sweet, another monitor that reflects everything! This was one downside I had with the PW201, but it’s hard to fault ASUS for their choice. The fact of the matter is, glossy displays look better to most people, but the downside is what’s evidenced in the image. This means that any light source could be reflected off the monitor. It also creates one of the worlds best dust vacuums and fingerprint magnets. 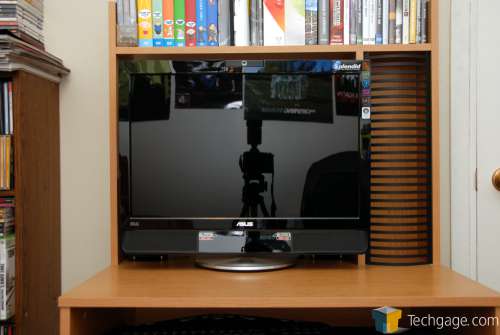 One of the first features you might notice are the two speakers in the front. The entire audio setup is effectively 2.1, with the woofer being behind the display. 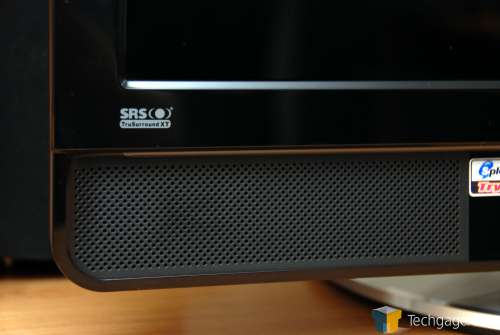 Like most ASUS monitors of late, this one includes a 1.3 megapixel webcam. In order for this to work, a USB cable will be run from the screen to the computer. However, that same cable also opens up support for the USB ports on the monitor as well. 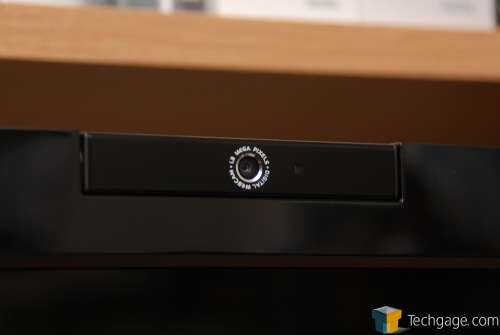 Behold the beast that is woofer. In this image, you can see the three USB 2.0 ports in addition to headphone/microphone jacks. The top button is used to enable or disable the SRS TruSurround XT virtual “surround-sound”, which enhances all audio, whether it’s gaming, movies or music. 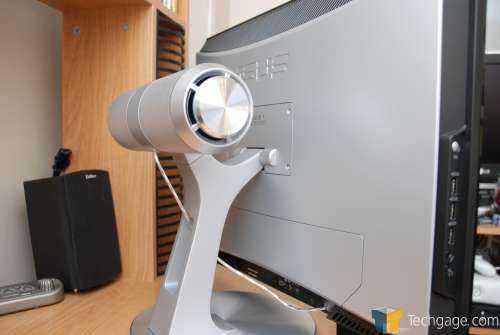 Being that the woofer is well enclosed, I didn’t attempt to open it to see what was going on inside. The two front speakers are 5W each, while the woofer is 15W. Not huge power here, but it should prove sufficient for most people. Anything more powerful might not be safe for the display itself, since it’s an all-in-one unit. 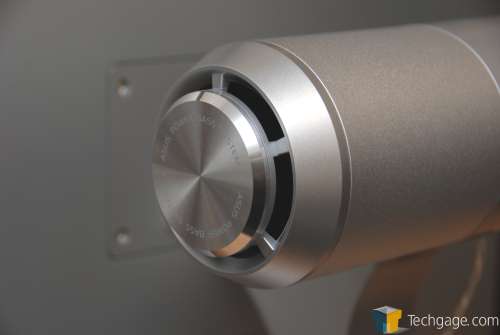 This display is targeted towards gamers, and that’s evidenced by taking a look at the back. Whether or not you want to play your old Sega Dreamcast, Nintendo GameCube, or your still-fresh Playstation 3 or Xbox 360, you can hook it up here. For those still stuck on VGA video (is anyone, really?), there is the option for that here also. 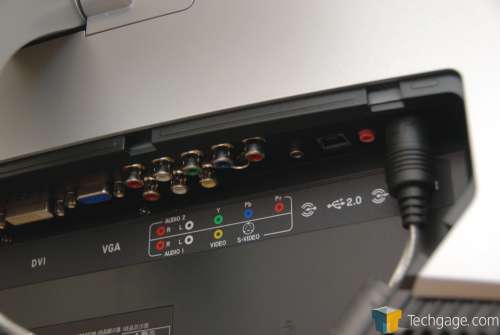 The ports to the absolute right are for the sound and USB functionality. The cord that’s pre-plugged runs from the display to the woofer and cannot be removed. 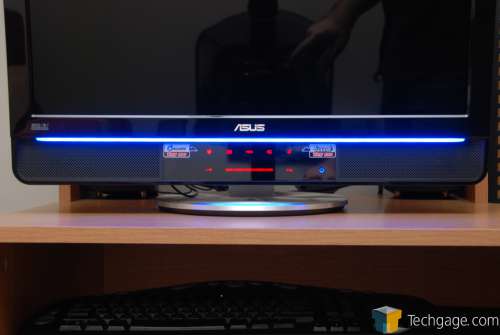 Each color mode is able to be dimmed or turned off completely. During normal use, however, the light will not be a bother since it’s hidden under a fold. Only people sitting away from the display can see it. What makes it cool is that the color will illuminate your desk, as you can see in the photo. Yes, that’s my hand in the monitor. I have no valid excuse for this.