There are a few other features and gripes about the display that I haven’t touched on, so I will do so now. First off is the fact that as with most of ASUS’ gaming products, the PG221 plays a cool melody when the monitor is turned on and off… each being different. This is fun the first time it happens, but becomes annoying fast, especially if you turn the monitor off or on late at night and have other people in the house. It’s -loud- by default, so it’s best to keep the volume down before you turn it off… or turn that feature off completely.

As far as the sound goes, I wasn’t blown away, but it was easy to tell that the audio output is better than a standard 2.1 set, and far better than any other display with built-in speakers. The rumble is very nice during movies or gaming and helped make gaming a little more interactive. I played through the last level in Half-Life 2: Episode Two which has numerous Striders roaming around. Whenever they make a step, the entire ground shakes, even if they are far away, and I could feel it because I kept my feet on the bottom portion of the desk.

When all said and done, I am awarding the PG221 a 7 out of 10. There is no primary reason, but rather just a handful of gripes wrapped into what I believe to be worth three points taken off of a perfect score.

For most people, the price might be the biggest problem, at $550. Even superb 22-inch displays cost around $350, so $550 is not something that can be ignored. However, I do feel the extra features definitely help that price even out a bit. Even $350 22-inch screens don’t have good speakers or render component video well, if they include the support at all. They also don’t look this good.

Pricing aside, while games looked great for the most part, I did see better quality with our previously reviewed Samsung 2232GW. During parts in a few games, I found the color in areas to be over-contrasted or overexposed – even after doing a fair amount of tweaking. Overall I am pleased to say that the monitor will not actually disappoint most. I could not have asked for anything more when it came to Half-Life 2, FlatOut 2 and Unreal Tournament III. 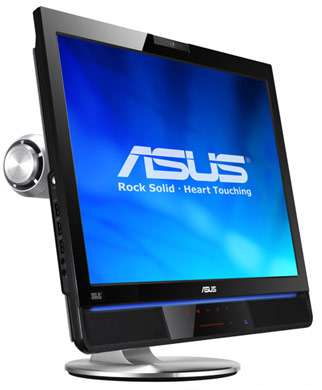 The last few of my gripes begin with the on-display touch buttons. Like the PW201, these are not entirely responsive all the time. On some occasions, I found myself having to tap the same button upwards of four or five times before something would happen. Compare this to Gateway’s implementation, which is rather painless. I hope to see future ASUS displays equipped with a better solution. I agree that touch buttons look far better than actual buttons, but for them to be acceptable, they need to work, and work well.

The last real gripe I have is with regards to a flickering issue I experienced. I believe this to be an isolated incident, but I am going to mention it regardless since I’ve had it happen more than once. Sometimes when turning on the display, or switching from the component video to DVI, the screen would display my desktop environment, go black and then show the desktop again. This happened in an infinite loop, until I turned off the display and turned it back on. I am unsure how this happened, but looking around the web, I was unable to see a duplicate instance of this occurring, so it could have occurred thanks to rough shipping.

To me, this monitor would be a fantastic offering if it were larger. If the few problems this monitor had were corrected and the size increased to 24" with 1920×1200 resolution and a price hike to ~$650 – $700USD, I would feel the display would be far more worth it. $550 for a 22-inch monitor seems high regardless of how you look at it. That said, if you are looking for a solid display that is feature-packed and will act well as a game console display as well, the PG221 is worth looking into. If you are not concerned with built-in speakers or game consoles, I’d quicker recommend the Samsung 2232GW.