To get the full benefit of the monitor, you will have a slew of cables to plug in. First, I connected the DVI-D cable, and then the power. That gives just the PC screen up to this point. I then connected the Firewire from the Monitor to the USB on the computer, to give me USB functionality through the screen. Finally, to test out some Xbox action, I hooked up the hi-def cables from that system.

That’s it… turn on the screen and you are good to go. It defaulted to the computer monitor mode, so I didn’t have to configure anything there. Installing the webcam is as simple as putting in the disc and following the on-screen directions. Nothing out of the ordinary here.

I don’t have a DVD player, but instead resort to the Xbox or computer. My digital cable box also does not include any compatible cables, so for testing I will just be using both the PC and the Xbox 360.

First off, this is one bright monitor. This is not uncommon with higher priced models however, and is welcomed. Blacks are pure black and whites are bright white, as they should be. I like to compare it to my older NEC 17″ LCD, where the whites are actually an off-white due to the lack of overall brightness that the screen is capable of.

Though the screen is bright, it’s not so overbearing that it will induce a headache quickly. I have in the past used my 26″ LG LCD TV as a computer monitor, and after an hour I get headaches due to the extreme brightness. Of course sitting right in front of it didn’t help either. That aside, after using this monitor for a while, whether it be gaming or desktop work, I did not feel a headache at all.

One way to easily test an LCD for it’s quality is to take a hard look at the fonts, especially on the desktop. With a poor LCD or poor connector, they tend to bleed. Not the case here though, incredibly clean thanks to the DVI cable.

It’s tough to photograph the screen quality without a tripod, but I gave it a shot. In the first picture, note the brightness. This is the default setting, 100. The Contrast defaults to 80, Sharpness 50 and Saturation 80. 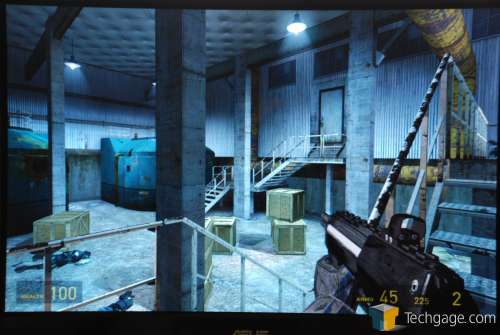 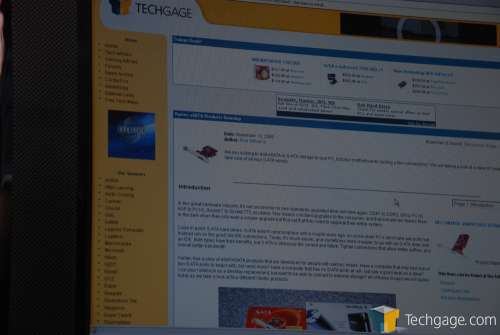 Hooking up the 360 was no problem at all, and the monitor recognized it just fine. I did quickly realize though, that for the “ultimate” 360 experience, you will not be using this monitor. Ever take an old console, such as a Dreamcast or Gamecube, and hook it up to a High-Def TV? The same affect is here… it’s almost as if there is no sharpness to the picture at all, like there is on a true high-definition 720p/1080p TV.

This monitor is not touted as a screen for the 360 though, but chances are you will get the same quality if you hook up a similar console or component. Having a TV that natively supports 720p will serve you much better for high-def use.

I didn’t test out the sound quality or webcam to a great extent, as there is really no need. The webcam is a 1.3 Megapixel which is the norm, so you can expect similar quality from this as you would from a similar Logitech stand-alone. The device initialized fast, and the picture quality was on par with other webcams I’ve used. The speed is also similar to other webcams, the most smooth resolution being 320*240. Moving to 640*480 and beyond welcomes a very laggy experience. Moving fast enough makes it appear as if you are morphing.

Sound from monitor speakers is never what I’d expect to be great, and the PW201 is no different. Actually, I had expected a lot more from the sound here, but the monitor didn’t deliver. It’s on par with a cheap pair of speakers, very hollow for the most part. The poor sound quality is not the fault of the sound card though, as the Xbox 360 had the same symptoms. These simply are not high-quality speakers, but will do if you have no better ones on hand.

As it stands, I enjoy this monitor, but only for it’s picture quality through the PC. Games look incredible, especially at the 1680*1050 resolution. The colors are sharp and accurate, which helps a lot. It’s just a great screen no matter how you look at it.

As a whole though, I found the monitor to be very clunky in design. I had a rough time trying to straighten out the arm to get the monitor in a normal position, even after reading the instructions. At least once that is taken care of, the screen is incredibly stable. The webcam is nothing amazing, but then again not many are. The frame rate was less than desirable, even at 320*240, but it is nice to have it built-in to the monitor ready to go. All that was needed was the driver and it worked fine. Coupled with the LifeFrame software, you can take video, pictures and even set it up to snap a photo every time motion is detected. That’s rather useful if you think someone is snooping around your room while you are gone :)

For a monitor with built-in speakers, I would have expected far better sound quality. The sound was so flat and hollow, I would never resort to using it unless I absolutely had to. You’d be better off with a $20 pair of tin can speakers from Target. There’s no bass at all, just flat noise.

Lastly, the menu system that the monitor offers is the clunkiest of anything else. Sometimes the screen would not react when I pushed the various options, and sometimes due to that, I’d have it do something I didn’t mean to. Although I am not fond of adding more remote controls to my collection, one which this monitor would have been welcomed.

Back to the good things though. This monitor has absolutely a gorgeous screen. Your eyes will be in heaven staring at this thing. Although it’s native resolution is 1680*1050, I found anything at 1280*1024 looked great also, primarily games. Taking the price into consideration, this monitor retails for around $500, which is more than most of the competition. However, this monitor has audio, component inputs and a webcam, which most don’t.

In the end, what takes away from this monitor is the clunky design, poor sound quality and the somewhat steep price. If all you care about is picture quality and a monitor that looks good, you will be golden.