With so much talk around Intel’s upcoming X58 chipset and Nehalem processor, it’s not hard to become uncertain about what to do if you are looking to upgrade or build a completely new machine. Sadly, it’s a difficult situation to have an answer for, as well. Rumor has it that Nehalem is set to drop in about two months, but if you are looking to build a new machine now, there’s little sense in waiting.

The fact of the matter is, Nehalem will improve upon current CPU offerings in all regards, but it won’t deliver such a stark increase in performance that you’d be kicking yourself for not waiting. That’s not even touching on the fact that Nehalem will require more money to get set up than with current offerings, because as with most new launches, everything will be expensive. Motherboards, the CPU itself, special CPU cooler… it will add up.

If you are looking to upgrade your current machine, then the decision is a little easier. Either you have a CPU you want to continue using, or you have intentions of buying a current model that not only proves to be affordable, but truly incredible performance-wise. At that point, it would make sense to simply upgrade. Though no pricing information is available for everything that will surround Nehalem, it’s no doubt going to be more expensive than setups today.

That all said, if you are preparing to build a completely new machine from the ground up, it might be worth your time holding out until Nehalem arrives, but for me to suggest that to anyone would be foolish. It’s a chance you’d have to take, and if you need a PC now, then don’t wait. You’ll get a great PC now, instead of having to wait two months. You could even be saving money in the process.

Normally I begin off reviews talking about the actual product we’ll be taking a look at, but that all had to be said. It’s a confusing time right now, because with Intel’s new products right around the corner, it’s definitely easy to become uncertain, but hopefully now you can make the right decision for yourself.

Ironically, I spoke about saving money just a few paragraphs ago, and now we’ll be taking a look at a product that’s not exactly too affordable. Alright, the Rampage Extreme is expensive… there’s no denying that. At $399, it’s going to appeal to a select audience, but make no mistake, this is not your typical motherboard.

Unlike a few previous chipset generations, where ASUS released two versions of the same board depending on the memory, the X38-based Maximus and X48-based Rampage offerings throw that idea out the window. The DDR2-based Rampage Formula shares the same chipset as the Extreme, but both are very different boards. The Formula retails for close to $300, and considering what all comes with the Extreme, the extra $100 might almost feel warranted. 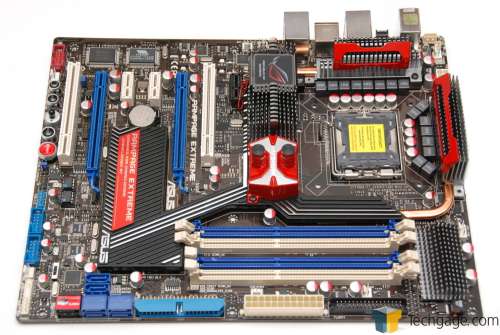 As you can see, the Rampage Extreme looks quite different than most other boards. ASUS took care to design the board in such a way that it would be lusted over by enthusiasts everywhere. They don’t go overboard enough to cause the product to look bloated, but what is here, works well. In the picture, you can see the great-looking red-shrouded heatsinks, which as I found out during Computex, had its inspiration derived from a Ferrari engine.

The board also features a robust 16-phase power solution, although whether or not that’s overkill is often debated. I’ve heard from non-motherboard vendors that adding too many phases can actually do more harm than good, but in the case of this board, what is here seems to work well… as we’ll see in the overclocking reports later.

DDR3 is still more expensive than DDR2, but it’s much more affordable than it was even just six months ago. It would make little sense to design such a high-end board and stick with DDR2, and ASUS decided that logic made perfect sense with them as well. 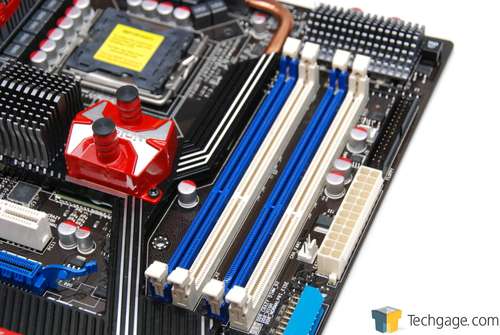 Like all Intel X38/X48-based motherboards, this one supports ATI’s Crossfire in 16x mode, so picking up two identical cards will deliver some fantastic gaming performance. I tingle when I think of having two HD 4870’s installed in this puppy. 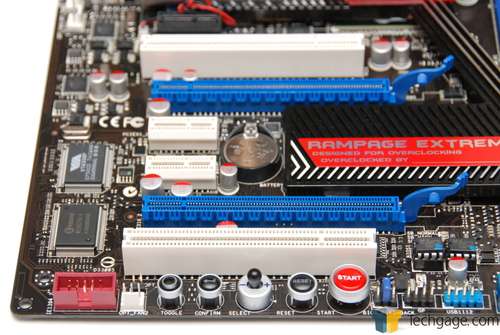 Wait a minute… what the heck are those buttons below the slots?!

I’m glad I asked. Err… I’m glad you asked. Because the Rampage Extreme is targeted towards extreme overclockers and hardcore gamers, ASUS packed as much punch into this board as possible. These buttons prove it. Combined with the included status LCD Poster accessory, these buttons can be used to control your overclocking. Yes, you can overclock the motherboard… with buttons. The buttons themselves are rather self-explanatory, and there’s no hidden agenda here. The Toggle button toggles between the CPU and Northbridge, the Confirm accepts your entry, while the Select toggle switch allows you to change the values seen on the LCD Poster. The Reset and Start buttons are not overclocking-based, but rather allow you to turn the PC on if the motherboard isn’t installed into a chassis. They’re certainly the best-looking reset/start buttons I’ve ever seen, though.