If you still doubt that this board is truly ‘feature-packed’, then keep reading. By the end of this page, you might just be eating your words! In the below picture, all the available S-ATA ports are shown, eight in total. Six of these are vertically-mounted, while the two others stick straight up, which is all-to-common.

I’m sure many who’ve used them will agree… vertically-mounted S-ATA ports are awesome. They are catching on with other manufacturers, but we really need to see more of them… they are just far, far too convenient. Not to mention sensible… it’s so much nicer to install your components and still have a clean case when you are done with the installation. 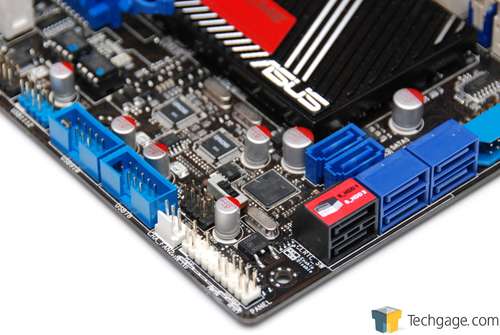 Also notice the little switch above the internal USB connectors and a little to the right. This is the CMOS clear switch, and all I can think of when I look at it is, “Why haven’t we seen this before?”. It’s so common for overclockers to constantly bork their board, and moving a small toggle switch each time is not fun. This takes the hassle out of it all. I didn’t get a chance to use it, however, as I didn’t run into a failed overclock that put the board in such a state. But besides that, there’s an easier method on the back, which we’ll talk about soon.

Moving on towards the CPU socket, the elaborate heatsink setup becomes clearer. There’s little chance that the CPU or surrounding area will overheat with so much surface area dedicated to dissipation… every angle is covered. The PWM and top of the board both have tall sinks, while the Northbridge and area have slightly shorter but wider heatsinks. The ‘Republic of Gamers’ badge as seen to the top-left of the image glows during use, and pulses when the PC is turned off. 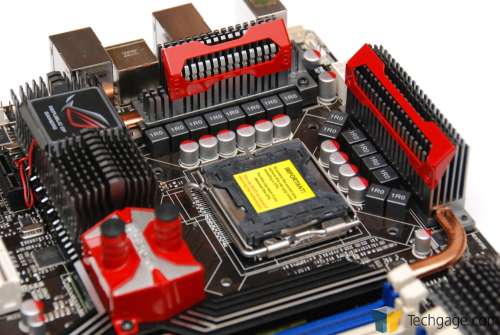 Here’s another angle, which shows off the 8-pin motherboard and 3-pin fan connectors. In the corner of the board are two very small connectors. The smallest connects to the I/O panel (yes, seriously), so that you can plug your LED into the panel, rather than directly into the motherboard. The larger connector is if you wish to go the opposite route and plug directly into the board, which would be useful if you aren’t using a chassis. 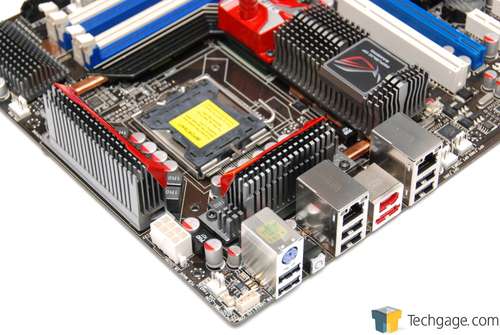 Last spring, when Intel launched their P35 chipset, ASUS launched the Blitz Formula and Blitz Extreme, the first two boards to support a water-cooled Northbridge natively. ASUS has stuck close to that feature and it’s, not surprisingly, found on the Rampage Extreme as well. 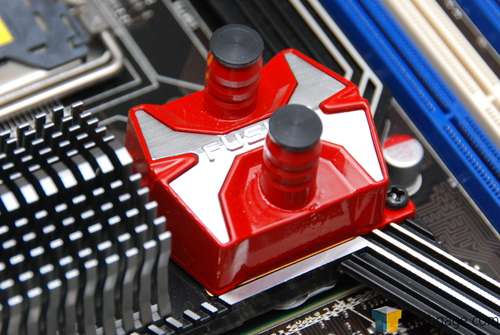 Don’t worry if you don’t have the correct barbs to fit it within your loop, as required water-cooling accessories are included, where you’ll find adapters among other things. I didn’t test this motherboard on water-cooling due to not having an appropriate kit, but if history is anything to go by, I wouldn’t expect it to improve overclocking. On both the P35 and X38-based Maximus Formula, adding water didn’t help anything, except temperatures. If using water, you could expect a drop of close to 10°C for the Northbridge, but it could be even higher depending on various circumstances.

At the back we find six USB ports, which amount to a total if ten if you take advantage of the two internals (which add two each), one e-SATA, one Firewire, two LAN, a quick CMOS reset and a PS/2 keyboard. 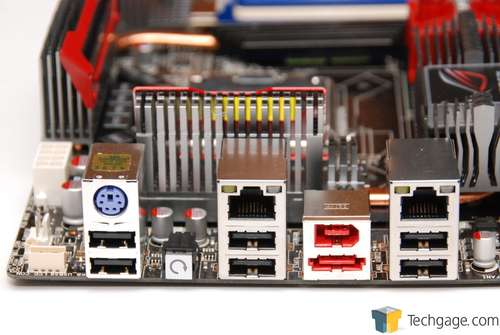 Not unlike any of the recent RoG boards, this one features an external audio card that’s to be used in the top PCI-E 1x slot. What is different about this one in particular is that it has a big fat X-Fi logo on the front, which immediately had me excited, until I dug deeper. 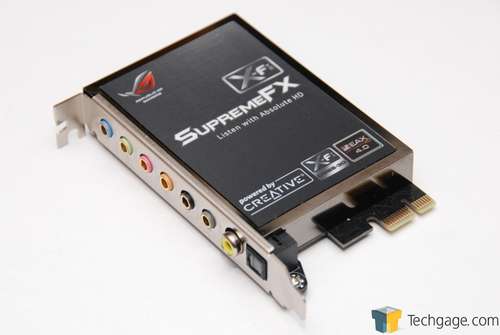 As it turns out, this card doesn’t support an X-Fi chip, but rather the typical SoundMax solution that ASUS has been using on many of their enthusiast boards recently. Where the X-Fi comes in is with licensed software that enables certain exclusive features normally only found on real X-Fi cards from Creative, such as EAX. Creative isn’t one to just hand over their technology, though, so this does add to the price of the board.

Where EAX is concerned, version 4 is where this card stops. EAX 5 has been out for some time, but it’s support is limited, so it’s unlikely to be missed. From what I understand also, EAX support here doesn’t work on all games that are said to support it. Creative is to blame here, as we know EAX extensions could just as easy run off of our CPU via software, so it’s their crippled software that’s the problem. 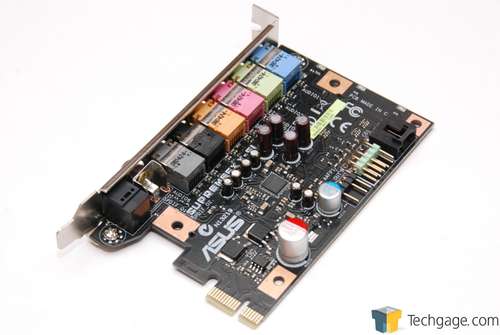 The fun stuff added in doesn’t stop though, as ASUS has included two replacement heatsinks in case you prefer their style. They’re unlikely to cool any better, but if you find yourself fond of one more than what’s installed, then all the power to you. This to me is a little overkill, but it’s there for those who want it. 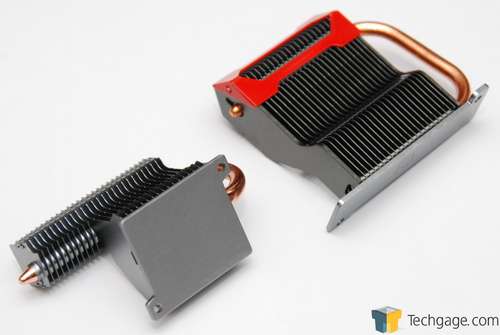 In way of other accessories, there’s a back panel connector for extending the amount of USB and Firewire ports available, in addition to the assortment of disk drive cables. 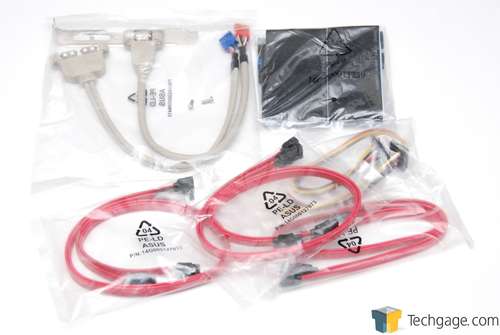 In addition to the manual and driver CD-ROM, you’ll find the Q-Connectors (easier chassis connections), rubber stand-offs (for out-of-chassis use), a needless chipset fan, the LCD Poster and also the back I/O panel. The wire extruding from that is what plugs into the motherboard, so that you can plug the LCD Poster directly into it instead. 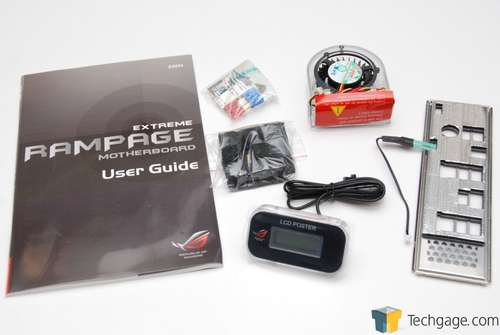 Lastly, below you can see the assortment of water-cooling accessories, some diodes for use with reporting through the LCD Poster and also some plastic straps for holding cables in place. Overall, to say this board is “packed” would be a gross understatement. It’s filled to the brim with extras not found on most motherboards, so it’s no surprise that it’s price tag is a little rough to stomach. 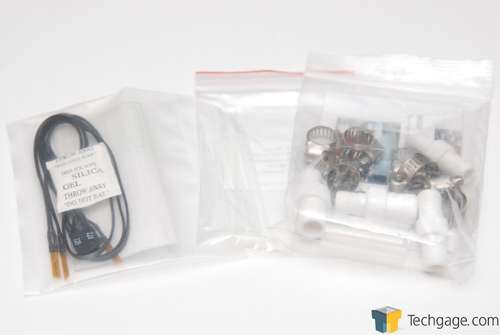 Is the BIOS as robust as the board itself? We’ll find out on the next page.