If you’ve read any of my performance-related content in the past, especially processor reviews, you are probably aware that I tend to shun non-stable overclocks. While I respect overclockers who push their hardware to the absolute limit, I appreciate a stable overclock more – one that can be run on a day-to-day basis with an excruciatingly low chance of failure.

So while others might be able to achieve higher overclocks, please understand that our goal is for pure stability, not an overclock that we’re willing to chance and hope won’t crash our machine. With that, allow me to explain how we go about finding out whether a motherboard overclock is stable or not.

Our method of testing a motherboard for stability is the same as the one we use for our CPU reviews. It’s a three-pronged test, beginning with the obvious stressing of both the CPU and memory. We accomplish this by using four instances of SP2004’s Blend test, which effectively coats both components with constant traffic. After a twelve-hour period, if stability is intact, we move onto step two: gaming.

Here, we load up multiple games, such as Half-Life 2: Episode Two, Crysis and others for some manual play-throughs. This is followed by a full run of 3DMark Vantage at the highest-resolution possible by the monitor, looped three times. If the board continues to be stable, then we apply the ‘cold boot test’.

Because overclocking can affect a computer’s operation in the strangest of ways, we use a cold boot test to make sure that the overclock is stable all-around, not just while in Windows. To do this, it’s a matter of turning the PC off for five minutes, then booting up, and then doing it again. If all these tests passed without issue, then we can consider the overclock to be stable.

With that all said, let’s get into the good stuff…

I was told to expect some easy overclocking with the Rampage Extreme, and ASUS wasn’t kidding. I’m one of the furthest things from being a professional overclocker, but I still enjoy pushing hardware far beyond spec without having to study up on what every option in the BIOS will do. The fact is, you don’t need to know half of what’s available. If you understand the basics, you’ll achieve a good overclock, guaranteed.

During all overclocking, the only settings I touched were the CPU voltage, Northbridge voltage, DRAM voltage and of course, the FSB and Multiplier. First stop, 580MHz with our Dual-Core E8400: 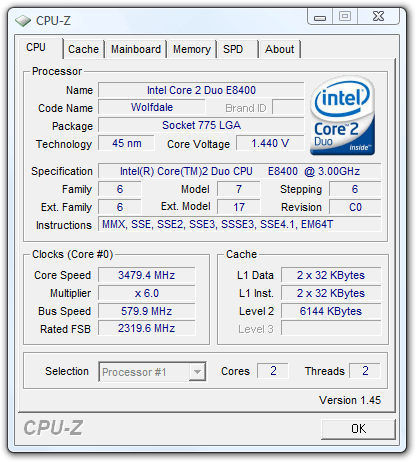 That overclock was rather impressive, because the Northbridge voltage required was only 1.55v, which is still within a very safe range (the option turns yellow at the 1.65v mark).

Things change when dealing with a Quad-Core, which isn’t the least-bit surprising. This particular Quad (QX9650) has never gotten above 475MHz, and nothing changed in the Rampage Extreme. It could be a CPU issue, I’m unsure, but even with 475MHz, a 4.25GHz overclock could be achieved (if you have the brass for it) or 3.8GHz on most locked mid-range Quad-Cores. 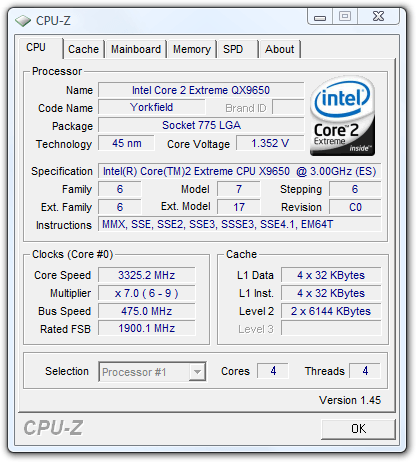 Overall, some great overclocks, and considering I didn’t even touch any of the secondary (or even tertiary) settings, I’m confident that a pro-overclocker could reach higher heights than this – should you have the patience and will.

One of the biggest features ASUS enjoys touting lately is with their EPU, or Energy Processing Unit. This chip allows automatic handling of voltages of key components, in order to maximize your power efficiency. It’s paired with the EPU-6 Engine software, and if you are overclocking, this software can’t be used.

Should you want to overclock and use this tool at the same time, you can set one of the profiles to overclock the CPU up to 30%, but whether or not that will prove to be stable will have to be tested. I cranked the frequency straight up to 30% and it wasn’t stable, so for a “real” overclock, it’s best to stick to traditional methods.

Also, it’s important to mention that in order for any benefits with the GPU, you need to use actual ASUS cards, along with drivers off their website, as they contain EPU-specific information. This is a rather significant downside of the EPU technology as far as I’m concerned, especially since the GPU is one of the biggest power-hogs in any PC today. 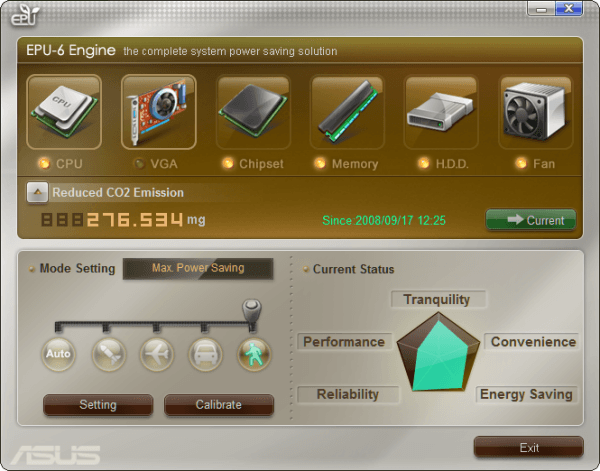 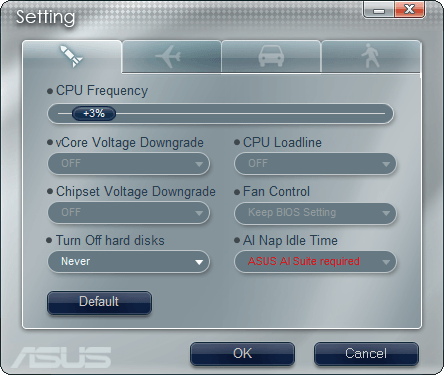 If you wish to keep stock settings (which would be strange given this would be your motherboard of choice), you can select from four different profiles, ranging from “full performance” to “max power saving”. Choosing the “Max Power Saving”, 15W was dropped off of idle usage, so EPU can make a difference in that regard.

Speaking of power consumption, let’s help wrap up our review with a look at the wattage that the board pulls and also finish off with my final thoughts.