For many people looking to purchase a new notebook, there are a few things that a model must have. Of these, great battery-life, a light weight design and great aesthetics tends to top most lists. Aside from maybe the aesthetics, the W90 from ASUS certainly doesn’t cater to those looking for an easy-to-carry model at all, or even one that has a “decent” battery-life.

Rather, the W90 is designed to be one of many things. First, it’s a great desktop replacement, although this isn’t the crowd ASUS is specifically targeting. Second, it’s a great workstation notebook, offering exactly the kind of power that people expect from their home workstation machine. Third, it’s a perfect HTPC. It offers up more than enough power for any possible media task, and thanks to its Blu-ray drive and HDMI output, it delivers on all fronts.

The fourth audience is actually ASUS’ primary target, gamers. The W90 is officially a “Republic of Gamers” notebook, and as we’ll see, it’s for very good reason. Honestly though, regardless of which scenario here caters to you most, the W90 is set out to more than deliver, and after having spent some time with it for this article, I still haven’t decided whether I should shut the site down and run off with it. Maybe not such a good idea!

What makes a notebook a proper DTR (desktop replacement) are a few things. First, it has to have a good CPU, because it has to be able to handle anything you’d want to do on a regular desktop, including intensive tasks like video encoding. Past that, it should have huge storage, and if you’re a gamer, it should also have a capable graphics card – at least one that can handle most games at the display’s native resolution.

The W90 delivers on all accounts. Because I had a limited time with the notebook and was requested for a quick turn-around, this notebook review isn’t going to be typical of how we usually handle things. Also, although this is a performance beast, we’re not going to exhaust our benchmark suite in order to deliver results, although we will touch on some of them lightly. 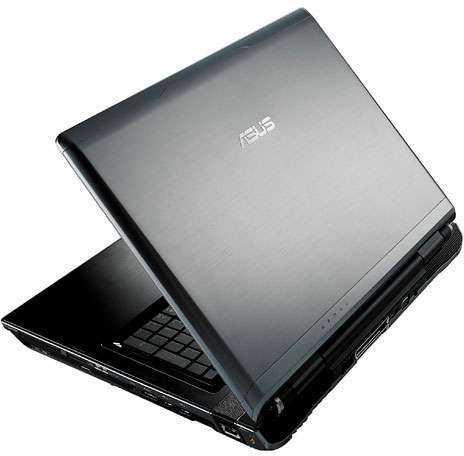 Rather, this article will take a look at the notebook from a features standpoint, and also a technical standpoint. You see, the W90 isn’t a typical notebook. Sure, it’s huge, but that’s not what makes it special. Under the hood is an X38-based motherboard. Yes, you read right… a desktop motherboard, in a notebook. The goal? To make the W90 a true desktop replacement.

Finding a desktop board in a notebook isn’t common, but given that ASUS has the technical resources to create their own custom designs, they were able to pull it off, and still offer a stable platform. By now, you’re probably wondering what makes this beast a desktop replacement, so allow me to tell you.

For starters, we have Intel’s latest “budget” mobile Quad-Core, the Q9000. Although it offers four cores, this particular model does turn out to be a small drawback for this notebook, as it’s clocked at only 2.0GHz. The reasons behind this decision were obvious. For a notebook with ASUS’ obvious goals, a Quad-Core was the only option. The Q9000 ships from Intel for just over $300, while the next step-up, a 2.33GHz model, sells for $850. Not a small difference.

But while that’s the case, ASUS helps make up for things by including an overclocking tool with the notebook, which effectively can push the CPU to 2.30GHz… not a bad deal. Of course, overclocking is never guaranteed, so 2.3GHz might not be possible for everyone, but I’m willing to bet that very few, if any, will be unable to hold that clock. Room temperatures will make a difference as well though. As long as you keep a well-ventilated area, you should be fine.

Being a gaming notebook, the W90 should offer a fast GPU too, right? Well, it doesn’t offer just a fast GPU, but technically two of them, in the form of the ATI Radeon HD 4870 X2. Yes… an ultra-fast CrossFireX solution in a notebook, it’s true. This is a major feature of this notebook, and it’s the reason behind the W90’s target of gamers.

Of course, the GPU is only one part of the equation. The other is the display, and the W90 again delivers, with a freaking humongous 18.4″ glossy LCD, offering a resolution of 1920×1080 (1080p). On the storage front, we have 640GB total, split between two drives, and also a BD-ROM/DVD±RW. Usual connectivity is here as well, including HDMI, VGA, modem, LAN, eSATA, FireWire, four USB ports, multi-memory card reader and also an ExpressCard slot. Select models may also include a TV tuner. As I mentioned before, there’s really nothing missing.