Before we tackle the results, let’s quickly review our basic notebook testing methodology. The first step in preparing the notebook is to completely wipe the factory OS and install our own (Vista Home Premium 64-bit). This is to prevent pre-installed applications from skewing our performance results. We then use the included DVD-ROM to install all of the necessary drivers. Also, Windows Search Indexing and a few other Windows services are manually disabled, to further help with producing accurate and repeatable results.

Once the machine is prepared for benchmarking, it’s shut down and set on a flat surface with plenty of room for airflow until it’s completely cooled down. Once benchmarking gets underway, the machine is boot and left to sit idle at the Windows desktop for five minutes, at which point testing begins. Each test is run through twice, with a reboot taking place in between each run.

Let’s start things off with a look at our SYSmark 2007 Preview results. For those unfamiliar, SYSmark is essentially one huge macro which utilizes numerous popular applications found on desktops and workstations, such as Adobe Photoshop, Sony Acid, Autodesk 3ds Max, and so forth. The suite is split into four different sections, including E-Learning and VideoCreation, with scores being awarded after the full suite iteration.

SYSmark tabulates scores based on how fast the given hardware was able to complete various tasks, and because the test emulates multi-tasking scenarios quite heavily, a fast processor and lots of RAM is required to achieve impressive results. 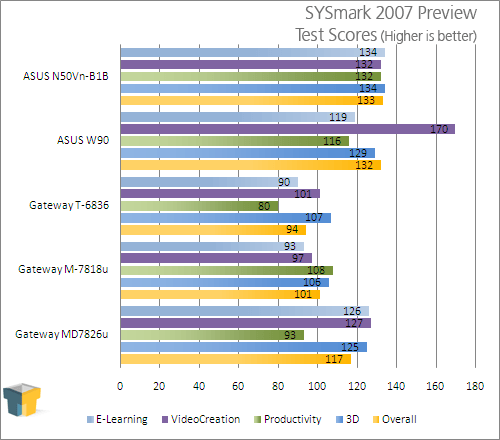 The W90 did, as expected, beat out the other recent notebooks we’ve taken a look at, but the difference isn’t as stark as you’d imagine with a Quad-Core, except where video encoding is concerned. Part of the reason for this is first the lower stock frequency, and also that SYSmark doesn’t take full advantage of multi-core processors at every angle. It is rather realistic to the common consumer scenarios, however.

Above, we can see a little more of the same, but where the Quad-Core is used, performance increases are seen, even with the lower clock-speed. For comparison’s sake, the ASUS N50Vn is using a 2.4GHz Core 2 Duo. Faster clock speed, but fewer cores. In some of the tests, like Lightroom and TMPGEnc, minor differences are seen, but there’s a rather stark difference in our dBpoweramp test. Oddly enough, our 3DS Max test performed worse on the Quad-Core, proving that our model apparently isn’t intense enough for multi-core processors. With the advent of Quad-Core mobile processors, we’ll have to revise which model we use for testing.

Where gaming is concerned, this notebook shines. I admit, I haven’t used high-end gaming notebooks in the past, but if the W90 is representative of most notebooks in this price range, then the only word to use is, “wow”. Never have I enjoyed gaming on a notebook as much as I did here, and this is no overstatement… the gaming performance is incredible. Imagine picking out pretty much any current high-end game, maxing the graphics, and running with it. That’s pretty much what the W90 is all about.

There is one caveat, and that’s Crysis Warhead. Oddly enough, the game doesn’t run perfectly with the Gamer profile and 1920×1080, which I find a bit odd, since the game looks nowhere near as good as some of the others I tested out. Games like F.E.A.R. 2 and Tom Clancy’s H.A.W.X ran perfectly with completely maxed-out graphics, and yes, that includes 4x anti-aliasing.

Take a look for yourself:

One common issue with gaming notebooks is that after a few hours of playing, the unit can become so hot, that performance slows down. On this notebook, it does get warm (especially in the back), but I spent hours on this thing and didn’t have a real problem. There were of course some sticks during gameplay throughout some of the games, but this is typical behaviour, even on a desktop.

For the most part, I found games to almost work better here than on a desktop… especially games like H.A.W.X, which was completely fluid and usually kept a 50 – 60 average FPS. Overall, this has got to be the ultimate LAN party notebook, without question. It also costs nowhere near as much as a comparable Alienware offering, and while it doesn’t look as cool, it certainly delivers the performance hardcore gamers are looking for.