I won’t provide a huge quantity of images of the admin, because it’s not much to look at. However, upon first entry, you will be asked, “Thanks for purchasing the ASUS Wireless Router, do you like to start Quick Setup directly?”, to which I promptly said yes. Well, the computer didn’t understand me when I talked to it, so I instead clicked on the OK button.

Here in order, are the questions you are prompted with: 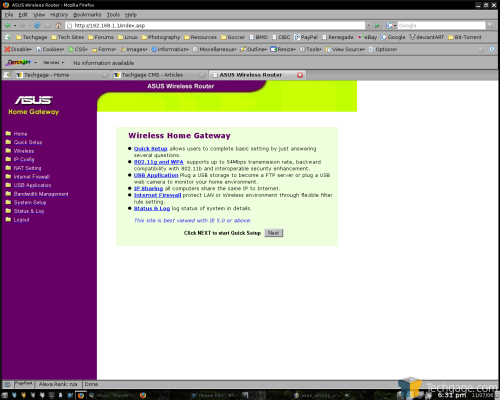 My configuration is this: 2 PC’s wired into the router, 1 Xbox wired, 2 PC’s wireless into the router. At first, the wired connections worked no problem, but the Wireless was completely non-functional. This is not something that surprised me though, as I’ve always run into problems in the past.

I tested out WPA/WPA2 and the PSK variants, but got absolutely nowhere. So at this point, I figured I’d throw in the CD-Rom to see if it would help me along any. At this time, I ran the “EZSetup Wizard”. 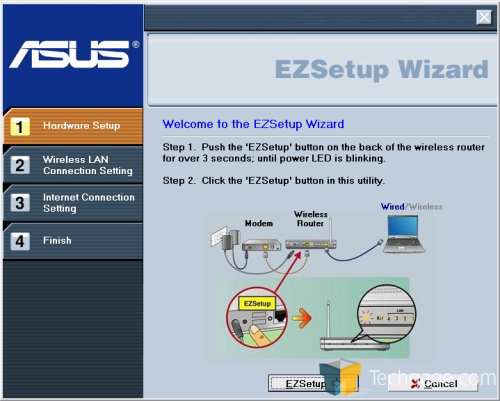 This begins you out at a screen showing you a diagram of how your setup should be. Then, you must reset the router and hold the EZ Setup button for three seconds. After, you can push the respective button in the program to continue.

If all is setup properly, the program will scan for the router and then if successful, connect to it. You are required to input an SSID, and it will automatically supply a WEP key for you. If you prefer WPA, the option is there for that also. I stuck with WEP for the sake of simpleness. It then finalizes the configuration. Lo and behold, the internet worked like a dream!

Prior to hooking up the WL-500w, I had been using the D-Link DI-624 wireless router, which sucks. Regardless, I tested the D-Link router before moving over to the new one, to see what type of performance gain is seen. When pinging the router wirelessly, I received ping times of 43ms/42ms/46ms/46ms… nothing too brag-worthy. I’m happy to report though, pinging the ASUS router proved to be a far better experience.

The only draft N card I have is a PCMCIA based one that ASUS provided, so obviously I tested it out in my laptop. Here are the results below. The first screenshot represents the laptop about 4ft from the router, while the second is around 24ft from the router. I repinged twice, just to verify that the first run was accurate. 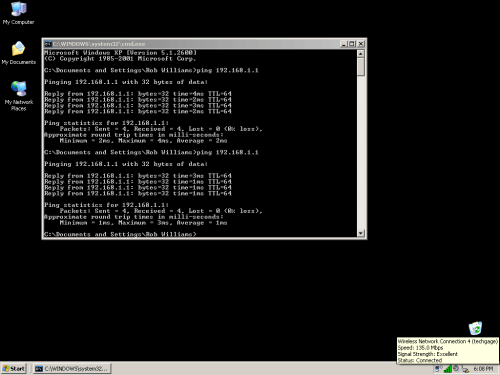 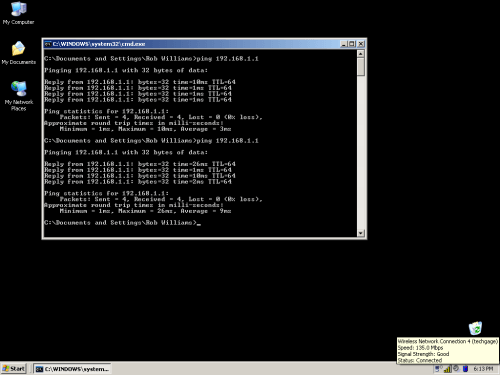 As you can see, the power of N really shows here. Even 24ft away, the pings all remained well under 10ms and in the corner you can see that I had a solid 135MBps connection, compared to wired which is 100MBps.

Sadly I did not have an N card for the desktop to test out, but I received -superb- performance there even with a cheap D-Link G card. The desktop was about 3ft from the router, and ping times were always 1ms or lower. The connection status was stuck at 54MBps, but it goes to show that even an older card with an N router shows that you can still acquire low latencies.

I also don’t have the luxury of living in a huge house, so I was unable to test further than 24ft without going outside. Even still, this router has some amazing performance. But, that aside lets take a look at what else the router offers.