So far, I haven’t really touched on any downsides of the router, because there are not that many, fortunately. There are a few though, which I will touch on now. First off, the admin panel to the router is far from being intuitive. It’s ugly, clunky and sometimes makes simple tasks difficult. One area in particular is setting up the wireless network from within this admin. If you choose to not bother with security, it’s not really a problem at all. But, once I tried to set up WPA or WEP, I could -never- connect to the router, after hours of playing around with different configurations.

However, when you install the Windows software, setting up security is not a problem at all. It worked like a dream. I don’t quite understand what the difference is, but that’s how things played out both with this router and also the WL-500g from last November. This could be an isolated problem with my setup specifically, but if I did not have a Windows PC handy, I wouldn’t have been able to set up wireless properly.

Wireless specifics aside, the admin is not that friendly when setting up the extra features that are available, such as external storage, FTP, et cetera. If you are a networking guru, it may not be so evident, but for the regular consumer, a better, more intuitive admin would have been appreciated. In all fairness though, ASUS has realized everything I just mentioned and proved it at CES with their WL-700gE router. Clicking on that link will show you an example of how much better the newer GUIs are. Hopefully they will be widespread into their entire upcoming lineup and not just the WL-700gE specifically.

I do like the fact that you can plug in a thumb drive or external hard drive and access the files throughout your house, on any computer. As long as you are running the Download Master software and are connected to the router, you should have no problem accessing what’s on the drive. However, if you are an alternative OS user like myself, you will not be able to access the router the same way you can with Windows.

Instead, you can set up an FTP server. You then just need to connect to ftp://192.168.1.1/ or jump into an FTP client and access it that way. You can adjust various settings to allow yourself to write to the drive, instead of only being able to read from it. That can vary on a per user basis, also. 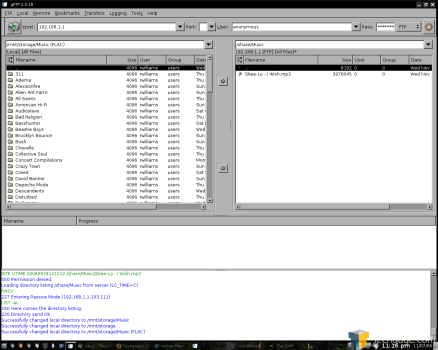 The router is also compatible with an Xbox 360. Not only to get Live working, but to grab photos and music from the drive that’s plugged into the router. In the above photo, you can see I transferred an MP3 to the drive, and below, you can see it being accessed off the 360. This wasn’t completely easy, but after tweaking around for about 15 minutes it was working smooth. 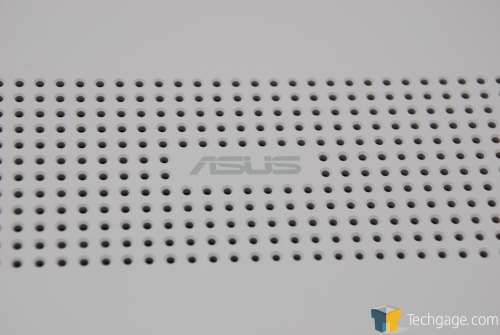 In the end, I am impressed with the WL-500w. Its performance is superb, which somewhat makes up for the incredibly clunky admin. Add to the fact that you can download to the router while your PC is off, plug in numerous USB devices for use on the network and have a lot of admin ability, this is a great router. Currently, the router retails for around $140USD, which is pretty well in line with other Draft N competitors, except this one includes a few extras the others don’t. When taking everything into consideration, I am awarding the WL-500w an 8 out of 10.