Need a new router but not ready to take the 802.11n plunge? We’re taking a look at a brand-new ASUS model that boasts tried and true 802.11g and offers it at a great price. It lacks in certain ways, but makes up for it in others, such as with the inclusion of a real print server.

When taking the first steps in building a home network, the logical starting point is with the router. After all, it’s the router that will enable us to take the incoming signal from our ISPs and deliver that signal to any device connected to it, either wired or wireless. It’s the device that will offer the first line of defense against those that intend to do us digital harm and it’s the little piece of hardware that will keep us all riding the tubes in ease.

When we go to pick one out though, it’s the same old faces we see at almost every brick and mortar store across the nation… names like Linksys, Belkin, D-Link and Netgear for a long time. While there isn’t anything wrong with the offerings from any of those companies, it’s easy to overlook the lesser known makers of networking gear like Buffalo, TRENDnet and of course, ASUS.

Did I just type out ASUS? As it turns out, if you can plug it in and connect it to your PC in any way imaginable, there is a very good chance that ASUS has either made it in the past or has a current offering of that device in a handful of different models. Such is life when you’re as large, and as popular, as ASUS.

Long known for their “rock solid” and “heart touching” motherboards, ASUS has been offering networking gear for quite some time now and while not as well known in the home networking crowd, ASUS has made some solid hardware over the years.

If further proof of said networking hardware is needed, look no further than our favorite Canadian (and Techgage’s owner) Rob and his reviews of previous models of routers… and in typical ASUS ingenuity, one even had a hard drive installed inside it. In each review, Rob was left impressed with the hardware he was evaluating so when ASUS asked us to take a look at their WL-520gU , we were more than happy to put it through its paces. 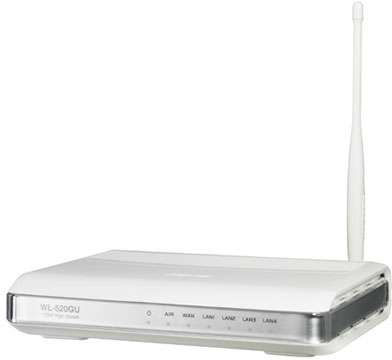 While not capable of transmitting on the speedy Draft N protocol, the WL-520gU is more than happy to work over wireless G – easily the most prolific wireless protocol on the planet. In fact, while 802.11n is superior in most all respects, one thing that the 11g crowd has over its quicker brother is that it’s installed in almost every notebook on the planet.

With n starting to make its move, it’s still in its draft phase (one of awkwardness and rebellion) which might turn off those not looking to take a chance on the unratified protocol. Offering more than enough bandwidth for almost every casual user, wireless g is still a perfect choice and like any aging technology, it can be had on the cheap as well. Weighing in at just under $50, the WL-520gU might be a solid choice for those looking to start their own network, or veterans looking for a reliable home for the vastly popular DD-WRT firmware.

The WL-520gU is a value product from ASUS, so both the packaging and accessories reflect that. Inside you will find the router itself, a warranty notice and a small box that includes a Cat5 cable, the power brick and also the antenna. ASUS also indicates that the router is designed for Vista, so we hope to avoid any problems in our tests with that and also XP. 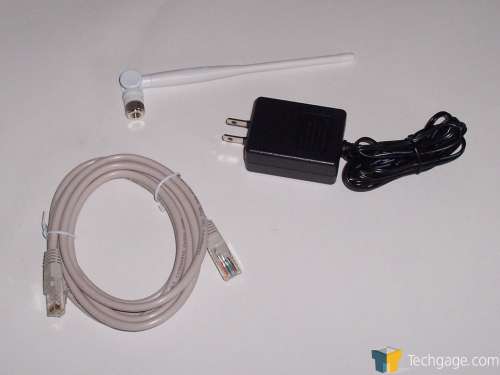 Taking a look at the router itself, we see a rather nondescript, white unit that’s about eighty percent the size of a DVD jacket. There are vent slots that run lengthwise along the top to let warm air escape, preventing possible overheating when router starts sending all of our test bits to their intended destinations.

Along the front and both sides there is a silver streak that sits behind a clear piece of trim. On the front of the router are seven LED indicator lights that glow a soft green when active. From left to right, these lights represent power air (wireless activity), WAN and LAN 1-4. Taking a page out of their notebook division’s playbook, the WL-520gU includes an ASUS logo on the top of the device centered for all to see. 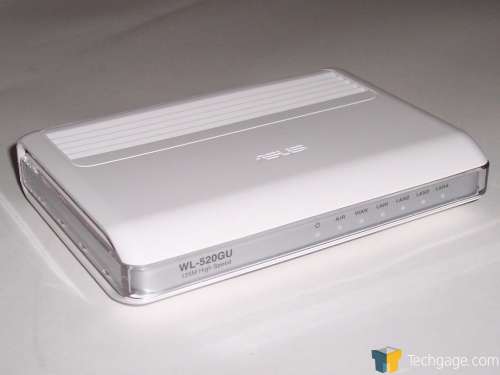 From a different angle, we can see that each row of venting slots is actually sets of six, which should provide adequate cooling for the router. Here, we can also can see everything the router has to offer externally. Starting from the left and moving to the right, we see where the antenna is to be installed and also a red button which ASUS calls the EZ Setup. This is similar to WPS found on other routers but as usual, ASUS has chosen to go their own way. The little black button is actually a recessed reset button, defaulting the router should a change in settings not go as planned. 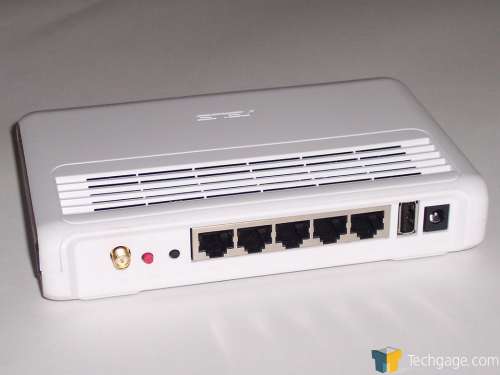 The first Ethernet port is the WAN port. This is where any uplink cable, usually from your DSL or cable modem will be placed. As the name implies, it is through this port that you will connect to a wider network (for simplicities sake we’ll call it the Internet). The next four Ethernet ports are 10/100 base jacks. As much as we would like to have seen gigabit speeds on this router, we will have to make do with the ones available.

If print serving is your bag, you’re in luck. I erroneously reported in our D-Link DIR-655 wireless n router review that the USB port on that router was to connect a printer to, but the WL-520gU actually does add this functionality and can also be used as a full-fledged print server. Finally, the last port is for the power cable.

On the underbelly of the router, we see more venting as well as spots for four rubber feet. These will help the router not slide all over your desk when the tension of four or five connected cables comes into play. Notice that the upper left and lower right pads are missing. This was not a flaw on ASUS’ part but rather my own curiosity. More on this in a bit. 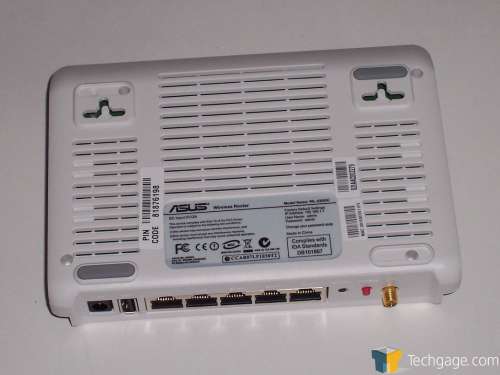 Near the bottom is a sticker with the only information given concerning the default IP address of the router, the default user name and password (admin : admin) and a friendly reminder to “change your password asap.” In all of the documentation included, virtually none, this is the only mention that we see of this administrator information so those that don’t know to look on the bottom of the router might very well start out on the wrong foot with their WL-520gU.

Up next, I’ll take this thing apart, then put it back together again! I’ll also take a look at the setup process, which doesn’t actually differ from the other ASUS routers we’ve taken a look at.