There have been many feature-packed routers to come out of the ASUS shops in the past year, but the WL-700gE takes the cake thanks to its pre-installed 160GB hard drive. Is this NAS/Router hybrid worth your $200?

I’ve been using this router for the past two weeks now, so I’ve become quite familiar with it’s reliability and flexibility. First and foremost, one of the most interesting parts of the router is the fact that you can download with your PC off. I will touch on this first.

Download Master is one of the best features of the router, but I was skeptical at first. The previous models I have used haven’t proven that reliable, especially with BitTorrent. ASUS told me that BT has been vastly improved in this model though, so I was about to put that to the test.

For Windows users, installing the ASUS software will automatically install a software version of the Download Master. However, I believe you should avoid that at all costs and stick to the one built straight into the router admin. The Windows version is very useless. While it would download torrents somewhat reliably, HTTP/FTP downloads were impossible. The admin inside the router proved to be a FAR better experience.

In this admin, you will have the choice to input a direct URL to the HTTP, FTP of BitTorrent file. If you have the BitTorrent file already downloaded, you can choose the “Download by BT file on local PC.” option and choose it that way. Once done inputing a URL, it’s as simple as clicking Download.

One thing I found odd, was that occasionally after adding a file, regardless of what it is, you will see an “Invalid URL” error. However, after refreshing the page, you’ll notice it’s fine. It’s odd, but at least it works. This page displays all relevant info about your download(s) including elapsed time and progress. They will remain on this page after completion, so you will know. 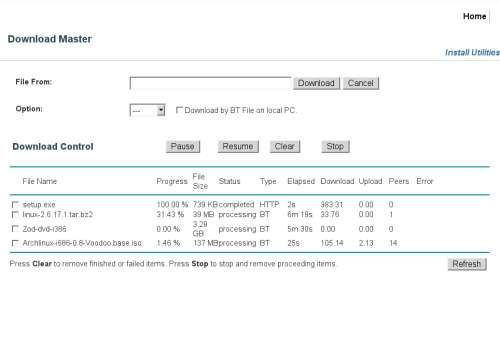 If you input a URL that’s a direct link to a file, the router should have no problem downloading it. However, if you are trying to download a file that runs through a script, it might be a little tricker. I am referring to those “Please wait 10 seconds while we redirect” sites. I tested on a few different ones, and I found this worked about 20% of the time. you will just need to play around with each one and see what works and what doesn’t.

I am completely pleased with the performance from the Download Master on the router, but not the Windows version. That one should be avoided completely. The performance was great, and the only downloads that didn’t complete were the ones with no seeders on the torrents.

Since I am primarily a Linux user, most of my testing in this regard was done with various *nix applications. I did test out on Windows Media Player, VLC and Foobar for Windows to make sure that all went according to plan. The router boasts being compatible with iTunes, and even though I didn’t test this directly, I have no doubt that it would work seamlessly. If you disable UPnP on the router, you will have to configure iTunes manually, but at default, iTunes should pick right up on it.

One of the first tests I performed simply involved copying over a few music folders to the router, then trying to play them through a music application. As you can see from the screenshot below, Amarok handled it perfectly. It accessed all the data through Samba and was quick while doing it. It may have taken about two seconds total for the song list to show up, and after that everything loaded as if it was on my own computer. 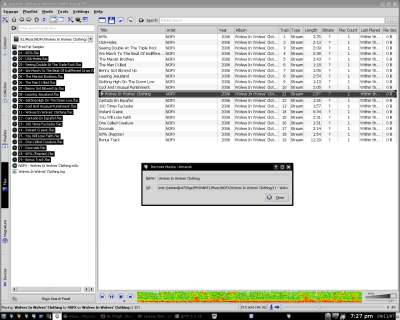 In Windows, adding music from the router to your music player is just as easy. All you need to do is browse for folder, and underneath My Network Places, you’ll find the router. Accessing it, you can go into the Music folder and get your groove on.