There have been many feature-packed routers to come out of the ASUS shops in the past year, but the WL-700gE takes the cake thanks to its pre-installed 160GB hard drive. Is this NAS/Router hybrid worth your $200?

For video streaming tests, I used two different methods. First, I ripped a concert DVD (Lamb of God – Killadelphia) to the PC and then copied it over to the router. This means, that the entire DVD contents were on the router, ready to be streamed to any PC. The second method was copying over a 720p hi-def file (Team Fortress 2 Trailer) to see how well that streamed.

Simple tests told me how much bandwidth the router itself is able to handle spitting out at a given time. Copying files to the router averaged at around 4MB/s, compared to 9MB/s for copying from one PC to another. This proves overall that a NAS would be much faster, simply because the router is not designed for performance. Either way, 4MB/s should be able to handle -anything-.

Take for instance a DVD video, where the main movie sits at 3.5GB for 2 hours of playtime. That’s 1.75GB per hour, 29MB per minute or 490KB/s. Given that I found the router able to deliver 4MB/s of content a second, you could essentially stream the DVD to more than one PC at once. However, I doubt you could run eight copies, for the sake of it being a lowly router and not a beefy PC or NAS that’s designed for multiple large streams.

Hi-Definition content is more important however, because it requires far more bandwidth than a DVD. The trailer I used for testing weighed in at 220MB for 3:22 worth of content. This amounts to almost 1.09MB of data for every second… twice the bandwidth a DVD would require. I didn’t have any 1080p content on hand to test out, but I’d imagine that would be even closer to 2MB/s. In the end, it’s obvious that streaming -any- content is going to be a smooth process, especially if you are streaming more than one 720p video at a time.

But what were my experiences? In order to stream a DVD off the router, you need a software DVD player that is capable of accepting the VIDEO_TS.IFO file, which is what gets everything kick started. Under Linux, I was unable to find any program that accepted these files, although I was able to play the .VOB files just fine through Kaffeine and VLC. On the Windows side, I used Nero Showtime which did handle the VIDEO_TS.IFO. Once loaded, the DVD worked great. Menus loaded fast, as did the actual content. Presumably it would prove faster over time than using the DVD directly, since the router will have faster seek/load times. 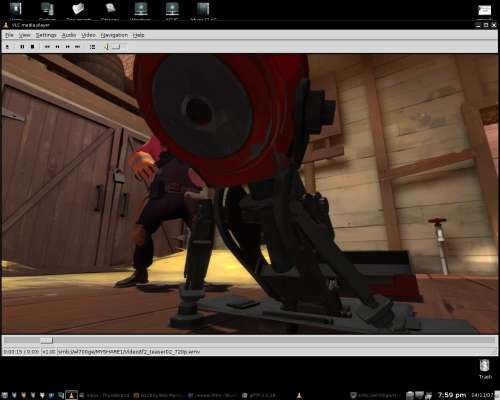 For the hi-def content, I ran two copies at the same time, to see if they stuttered. One was on my Linux machine using KMPlayer and the Windows machine was streaming through VLC. I’m pleased to report that there was absolutely no lag whatsoever. The video was smooth, as was the video. This is not a scenario I’d ever personally be in, but it was nice to know that the router was able to handle it. Running two copies of 1080p content at the same time would no doubt hinder performance though, as you would be trying to ask for more data than the router wants to push out.

One thing to note though, is that if you are copying a large file to the router at the same time while trying to stream large video, you may experience some lag. While I was copying that DVD rip to the router, I was watching that 720p trailer at the same time. It would randomly halt at various points for half a second before resuming. So while the router is able to handle a fair amount of output, it doesn’t want to handle two large tasks at once.

ASUS has impressed me quite a bit with their WL-700gE. As it stands, wireless performance is on par with the other ASUS routers I’ve reviewed, which has been very good. Aside from that, it’s a great looking product. Sleek even. It includes its own stand, so when it sits on your desk it’s not an eyesore but instead a nice addition. If you are a fan of Apples styling, you’ll enjoy the look of the WL-700gE.

Performance and design aside, this router offers a lot to the consumer. The streaming ability has proven very good, although it wasn’t perfect when trying to multi-task (copying and reading at the same time). That won’t be much of a problem however, unless you are dealing with hi-resolution video while copying files to the routers hard drive. 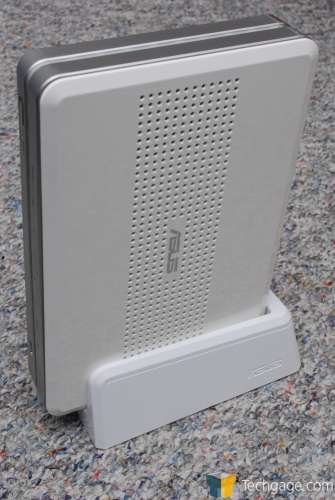 Some of the features are more useful than others. In the case of the “Create a Website”, it’s not worthwhile unless you want to stick to their strict layout. Nothing is stopping anyone from replacing this website with their own though, as long as it’s HTML/text based. If configured properly, you could host your website quite reliably off the router, once you have a domain name set to your IP. Of course this would be for very small websites. Your bandwidth upload and the routers endurance probably doesn’t want to handle too many users at once.

A small snafu I did run into had to do with Xbox Live. In order to properly connect (even wired), I had to disable UPnP on the router. Because of this, UPnP capable devices will not automatically pick up on the router, although you can still access if it’s already configured.

As far as router prices go, the WL-700gE is more expensive than most. The 160GB version retails for $200 – $230 on average, so you are paying a premium to have a hard drive pre-installed, which in turn offers new features that most routers do not have. It’s really borderline NAS, but a router at the same time. You will get better performance on average from a NAS, but for a combined effort, the WL-700gE really excels.