ASUS is widely recognized as one of the premier manufacturers of PC hardware, so their decision to branch out into PC audio hardware alerts us to be on the lookout for an uncommon level of quality and attention to detail. It’s no wonder that the arrival of their Xonar products has created such a stir. A look at the Xonar D2 card itself makes it clear that ASUS isn’t simply looking to enter the market â€“ they’ve launched a bid to dominate it. The Xonar D2 shares a skin-deep similarity to the recently-reviewed Razer Barracuda AC-1, therefore frequent comparisons between the two cards are more than merely incidental.

Warning: Intensely technical discussion follows. If you decide to simply skim the next section, we won’t be offended. 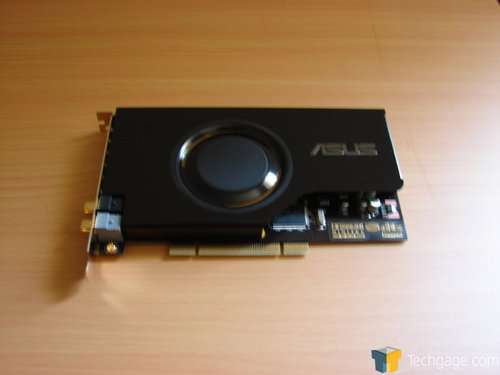 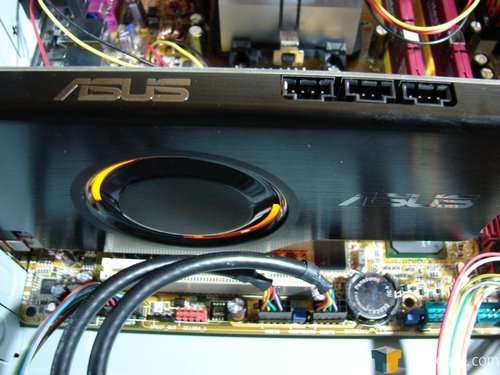 The most eye-catching feature of the ASUS Xonar D2 is the distinctively-styled steel shield that covers most of the card. The purpose of the shield is to protect the more sensitive audio components, specifically those that deal directly with analog signals, from electromagnetic interference (EMI).

Because the most barely-audible sonic details deal with extremely small voltage fluctuations at the signal level, any incident electromagnetic noise can seep in and make its way into the output signal. This is a particularly serious problem with many onboard audio solutions. The D2 has it covered, however (pun very much intended, thank you). The ‘ring’ in the center of the EMI shield illuminates when the Xonar card is powered up, emanating an appealing amber glow. 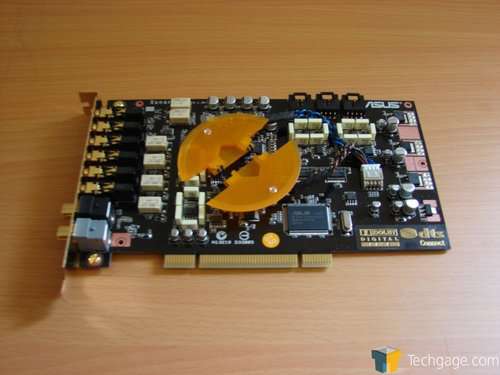 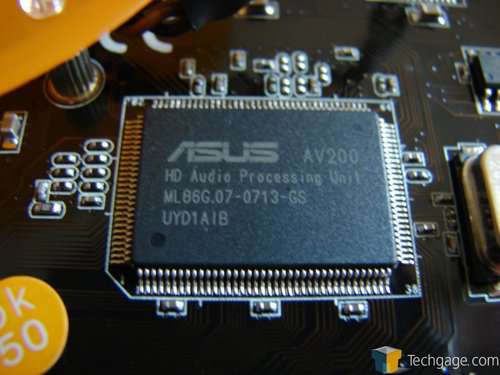 The removal of four tiny screws allows us to take a peek under the hood, so to speak. The card’s layout is similar to those we’ve seen in the past, but it’s not a C-Media reference design (see Sondigo Inferno). Much of the center of the card is blocked by the amber-colored plastic pieces that conduct light from LEDs to the large ring on the EMI shield. In the bottom center of the card is the ASUS AV200 (CMI8788 OxygenHD) codec chip, which is capable of stratospheric SNR ratings in excess of 118dB.

This is the same chip that Razer uses in their Barracuda AC-1 sound card, though its SNR specification stated a maximum of only 117dB. It is possible that C-Media has refined their manufacturing process to make their product capable of even higher SNRs. The CMI8788 chipset runs at 24.6 MHz, and is capable of 32-bit resolution (though the DACs used here only support 24-bit operation). 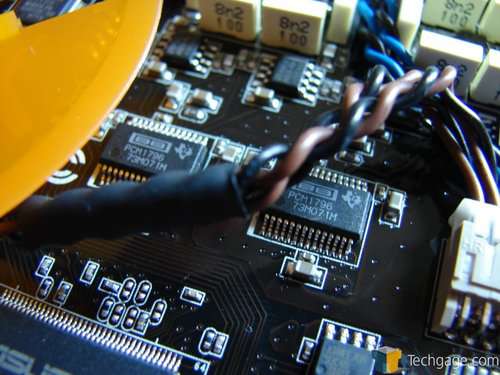 The ASUS Xonar cards feature extremely high quality Texas Instruments Burr-Brown DACs (Digital-to-Analog Converters). Burr-Brown DACs are featured in high-end audio equipment, from expensive multichannel receivers to high-end preamp/processor units, as well as in studio recording equipment. These particular DACs, the PCM1796, aren’t the top of Burr-Brown’s product line, but they’re a significant step up over the Asahi Kasei (AKM) DACs used in the Razer Barracuda card we reviewed in early April, with an additional 3dB of SNR. In addition, the Burr-Brown DACs introduce less than five ten-thousandths of a percent total harmonic distortion.

Why go so far? The DACs are only one component in the signal chain, but a signal chain may involve two or three stages of digital-to-analog conversion, or vice versa. Minimizing the amount of errant content (distortion, noise) introduced to the signal at every stage in the chain ensures that the cumulative effect will be inaudible, maximizing fidelity. Two of the DACs are visible here; the other two PCM1796 DACs are underneath one of the hemispherical amber-colored ‘wings’.

On the input side, the ASUS Xonar D2 card uses a Cirrus Logic CS5381 ADC chip to convert the incoming analog signals to a digital stream. The CS5381 is no slouch, offering the same quality as the AKM DACs used in the Razer Barracuda AC-1’s output stage with 120dB SNR and a THD+N spec that is 110dB down from the input signal. The CS5381 chip itself is hidden underneath one of the two illumination ‘wings’. 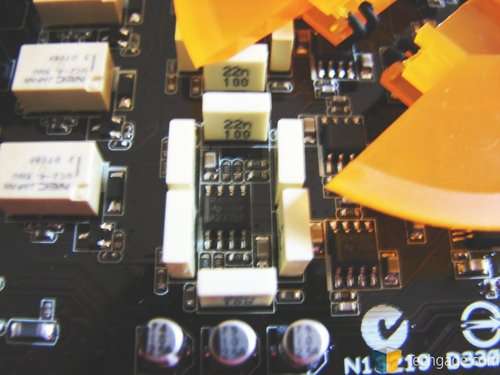 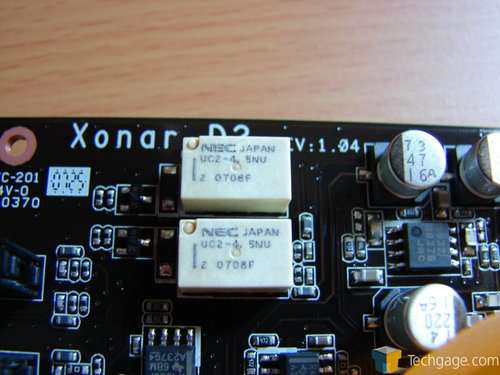 The Xonar D2’s circuit board is peppered with small, light-colored components labeled “NEC UC2-4”. These are miniature relays for switching the card to ALT recording mode. ALT stands for “Analog Loopback Transformation”, which allows the card to record directly from its analog output without using an external loopback cable. Because the Xonar can record at almost exactly the same quality level with which it plays back sound, ALT allows high quality recordings to be made from the card’s analog output. Asus advertises that this feature could be used to back up music files that are DRM-protected, allowing users to exercise their fair-use right to make a single archival copy of their digitally-stored, DRM-protected recordings.

With the Xonar’s high-quality signal path, there would be virtually no audible degradation to audio files produced in this way â€“ the compression algorithms commonly used do far worse things to the waveform than the Xonar’s DAC–>ADC process. Of course, if you’re a stick-it-to-the-man type of person, this feature could potentially find other applications of questionable legality.

Other components found on the Xonar D2’s circuit board include JRC 5532 and 211C opamps, and a single National Semiconductor LM4562 opamp in one of the output stages, likely the LFE stage. 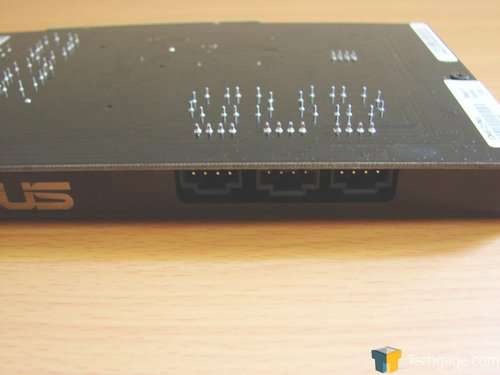 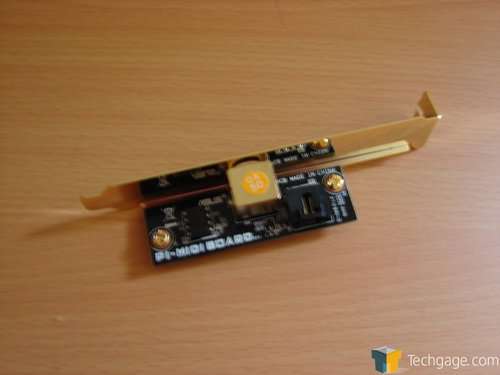 The Xonar D2 also features three internal 4-pin I/O connectors. The one furthest right is the MIDI I/O connector, while the other two are analog inputs for CD and Aux sources, respectively. The MIDI I/O module installs in an expansion slot, and connects to the Xonar D2 with an included 4-pin cable. 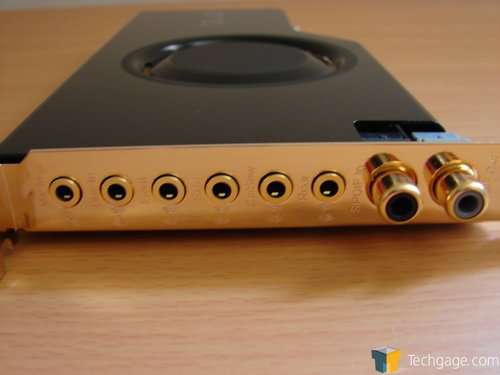 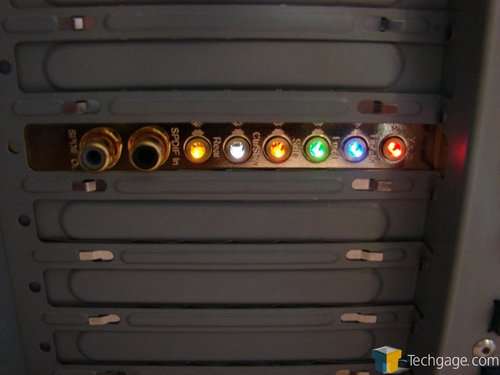 The I/O panel of the Xonar audio card features six gold-plated 3.5mm analog I/O jacks and two digital I/O jacks. However, one of the more novel features of the card is that each port is illuminated with a specific color, which makes it easy to find the right port even when the room is dark. What’s more, the lights also cast a nifty prismatic glow on the back wall. Unfortunately, if you would rather not have a PC that lights up like a Christmas tree, you’re stuck with the lighting, but it’s tasteful and hardly overdone.

Next, let’s look at the driver software for the ASUS Xonar D2.