As we’ve seen in the past, sound cards and positional audio processing can be responsible for a significant amount of CPU overhead in 3D gaming. Different audio codec chips handle different amounts of the overall DSP processing, and the rest is offloaded to the CPU. When we reviewed the Razer Barracuda sound card in April (based on the same basic CMI8788 chip design as the ASUS Xonar), we found that the CMI8788-based chip relied heavily on the CPU, creating substantially more processor overhead.

To make these measurements, RightMark 3DSound 2.3 was used to generate random noise and load each audio card with a number of concurrent buffers, which was varied to show a trend in the increase of CPU usage based on different cards. Test sets were performed for 16, 32, 63, and 127 buffers, respectively. The program’s algorithm monitored CPU usage over a period of 1 minute for each test, and then averaged the values over time. All other programs running on the computer were closed to minimize variance caused by other programs vying for the CPU. 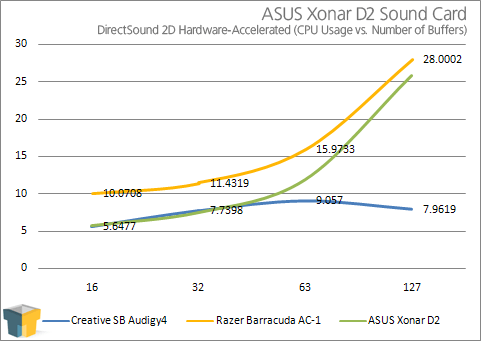 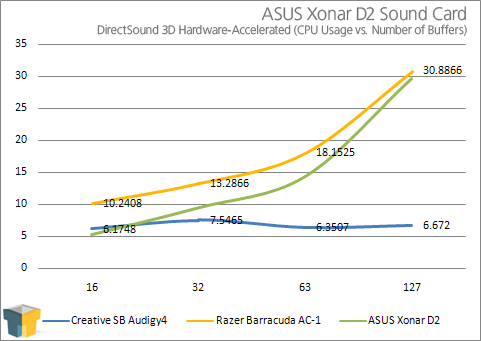 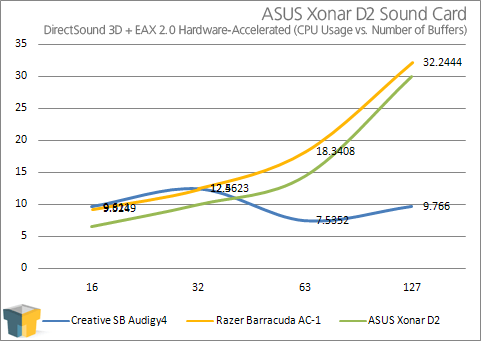 Here’s what the results show: Through all testing, the Creative Sound Blaster Audigy4 card delivered the lowest overall level of CPU utilization, staying under 10% even in the demanding 127-buffer test. The number of buffers increased at approximately n^2 for every scale division, while the CPU usage for the SB Audigy4 remained fairly constant. The Razer Barracuda AC-1 turned in the worst performance here, despite its styling as a ‘gaming’ audio card.

It appears that the newer CMI8788 drivers supplied with the ASUS Xonar D2 have managed to reduce CPU overhead somewhat, but in the 127-buffer test, CPU usage just barely tickled the 30% mark. The 127-buffer test is an extreme case, but it shows that the ASUS Xonar may not be the best card for gaming, a point only further reinforced by the lack of support for EAX versions after 2.0.