The ASUS Xonar D2 impressed us at just about every turn. Through and through, a high-end approach has been taken to the design of the Xonar, from extremely high quality circuit components to rock-solid driver software. However, the secret weapon of the Xonar sound card is its extremely low distortion.

With all the marketing play that is given to signal-to-noise ratio specifications, distortion figures go mostly unnoticed. However, with harmonic distortion figures that match the top-of-the-line Creative X-Fi Elite Pro, the Xonar cards are capable of breathtaking musicality, and this is evident in listening tests with high quality sources. In short, we were wowed by the audio performance of the Xonar D2. 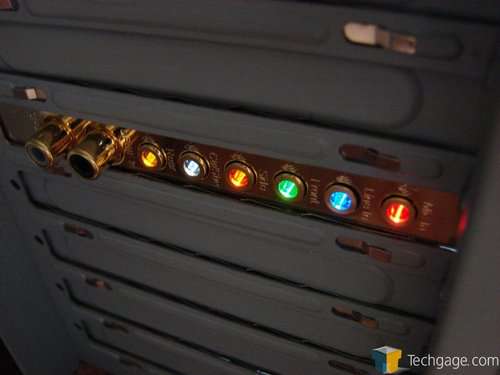 The Xonar D2 card may not be so perfect for everyone, however. In our RightMark testing, the Xonar card still placed a relatively large amount of overhead on the CPU for DSP processing when dealing with a large number of simultaneous buffers â€“ significantly more than the old Audigy4 card we used in our comparison testing. The Xonar sound card also lacks support for EAX versions above 3.0, which means that gaming audio performance suffers somewhat.

Of course, EAX is proprietary Creative Labs technology, so the very fact that we have to grade down the Xonar D2 because of its lacking EAX support goes to show just how tied-up the gaming industry is with Creativeâ€™s proprietary positional audio technology. Neither of these shortcomings limit the Xonarâ€™s appeal for music listening, home studio use, or high-fidelity music listening, however, which appears to be where the Xonar D2 is targeted. 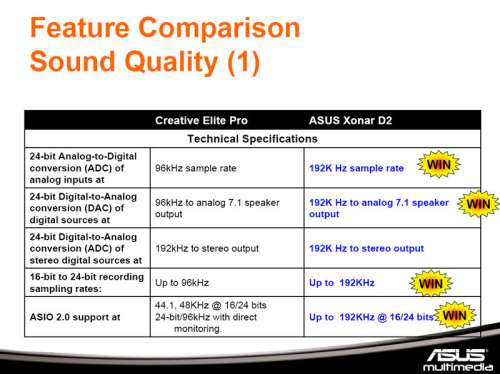 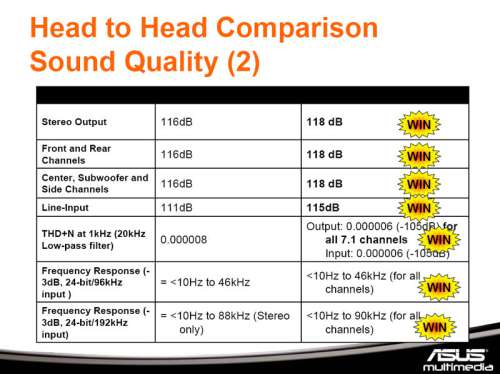 From the outset, it looked like ASUS was preparing the Xonar products to be X-Fi killers in terms of sound quality, but what theyâ€™ve really succeeded in doing is delivering a product thatâ€™s an excellent value. It delivers the extremely high SNR and low distortion of Creativeâ€™s X-Fi Elite Pro sound card, at a price thatâ€™s about $70 less. For that $70, though, you give up the X-Fi Elite Proâ€™s breakout box and hardware DSP acceleration. What you get instead is one very sexy-looking piece of audio hardware, and a fantastic suite of bundled software. Weâ€™re pleased to award the ASUS Xonar D2 a well-earned Techgage score of 9/10, and Iâ€™m proud to make it my Editorâ€™s Choice product for September.