The quality of PC audio has made incredible strides within just the past few years. At a CES a few years ago, Dave Wilson of Wilson Audio wowed show-goers when he demonstrated his imposing $135,000 Alexandria X-2 high-end speakers hitched to thousands of dollars of audiophile amplification, and fed by… an iPod. The point of the demonstration was to show the improvement that speakers can make in a signal source that many golden-eared audiophiles would consider low-quality.

Today, even audiophiles are beginning to take another look at PC audio, thanks to the rise of lossless audio codecs that make it possible to store bit-perfect music and play it back at high bit rates. The PC is one of the best places to enjoy great sound (by virtue of the amount of time spent there), but one of the most difficult places to create great sound. The “head-fi” crowd (that is, those who prefer to listen to high-end headphones) seem to have the high ground when it comes to enjoying great sound at their PCs, since headphones are designed to eliminate the listening space – with its obstacles and reflective boundaries – entirely.

Audiophile headphones exist, sold by companies like Beyerdynamic, Stax, AudioTechnica, AKG, Ultrasone, and Sennheiser – that’s no problem. The weak link in many PC audio systems, where headphones are concerned, is actually the quality of the host machine’s audio hardware. As it turns out, most PC sound cards are poorly suited to drive headphones of the high-impedance variety, which use voice coils wound with smaller-diameter wire, in order to create a more powerful electric field.

Looking at a headphone driver like a simple loudspeaker, this stronger field enables the voice coil to produce greater force on the diaphragm. This comes into play in high-frequency extension, where it becomes important to reverse the direction of the diaphragm very rapidly, and also in low-frequency output, where producing large diaphragm movements are essential to generating beefy bass. 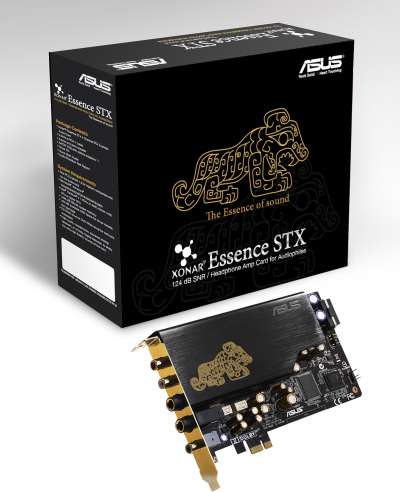 When we reviewed the Razer Barracuda and ASUS Xonar D2 audio cards, they represented the high-water mark of voltage output, at 5mVpp – five millivolts, peak-to-peak. However, even the Xonar D2 managed just ‘decent’ volume output from my reference Beyerdynamic DT 770 high-end headphones, which present a 250-ohm load – the earlier-reviewed Ultrasone HFI-700 headphones presented a much more manageable 75-ohm load.

Until recently, anyone hoping to get great headphone audio at their PC would need to invest not only in a high-end sound card, but a separate amplifier to boost the output voltage in order to achieve meaningful output from their audiophile cans, but an all-in-one internal solution capable of driving high-end headphones easily had yet to materialize. Then ASUS unveiled a rare curiosity at Computex 2008, a sound card dedicated to stereo output, with a built-in two-channel headphone amp, called the Xonar StereoX. 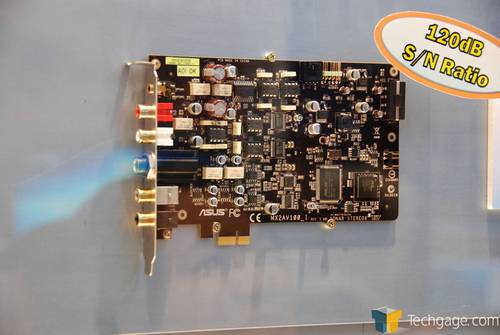 That card materialized early this year in a somewhat different form, as the ASUS Xonar Essence STX (with the STX perhaps referring to its forerunner’s moniker). The Essence STX clarifies the product’s audiophile targeting somewhat, and touts an incredible 124dB signal-to-noise ratio. The card loses its optical/coaxial digital input connection, but gains an additional quarter-inch input jack for analog audio input, and a metal EMI shield covering the upper half of the card containing the analog output stage.

The focus of the Essence STX is in providing the very highest-end experience for stereo music, not delivering realistic surround-sound effects, but the question is this – will you really miss them? The sound cards that currently top the charts are all multichannel jobs – with the ability to output 5 or 7 full-range channels and a separate, dedicated LFE channel for feeding a subwoofer, as well as the ability to synthesize multichannel reverb effects that lend a sense of spaciousness to PC games. The Essence STX, on the other hand, lacks analog outputs for multichannel audio, though it supports multichannel output via its S/PDIF digital output.

Does the Xonar Essence STX’s stratospheric signal-to-noise ratio and onboard headphone amplifier really elevate the audiophile experience at your PC? Or is it only a curiosity in the overcrowded market for PC audio cards? We’re about to find out.