The ASUS Xonar STX comes in a box that’s similar in design to the one that our Xonar D2 card came in. The front of the box swings upward to reveal the card, encased along with its accessories in a multi-level plastic (PET) shell. However, the design on the carton is a departure from the other Xonar cards we’ve seen thus far. The entire box is black, and a Chinese tiger figure is emblazoned on the front. It’s the same marvelous packing job we saw with the Xonar D2, and the effect is no less meaningful here – we’re being introduced to a top-class product. 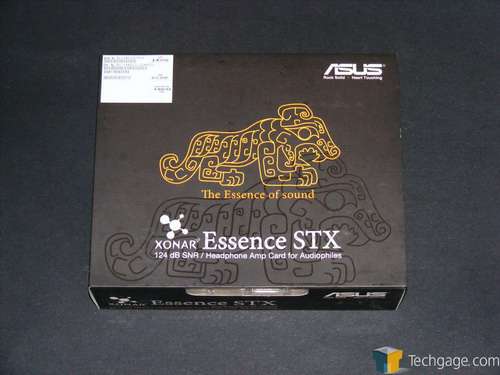 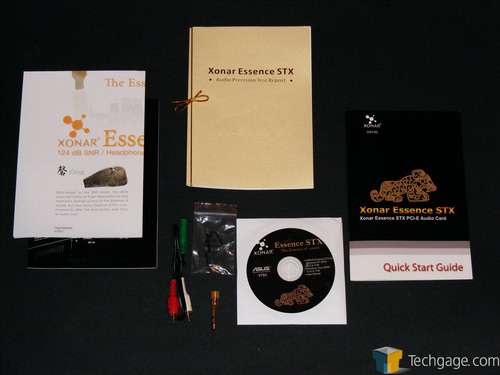 The products in ASUS’ Xonar lineup have typically had excellent accessory bundles included with them – the Xonar D2, for example, included basic versions of popular multitrack audio recording software, a full set of adaptors, and even a short optical audio cable. The Xonar Essence STX bundle includes an adaptor from the card’s mini-optical output jack to a Toslink connector (the type of digital connection on most home audio electronics) and an adaptor from the card’s stereo RCA output jacks to a single 3.5mm stereo jack. The bundle also includes an instruction manual and a pair of poster-size pages that explain the significance of the tiger figure – it was discovered on a small chime that dates from ancient China, over 4000 years ago. 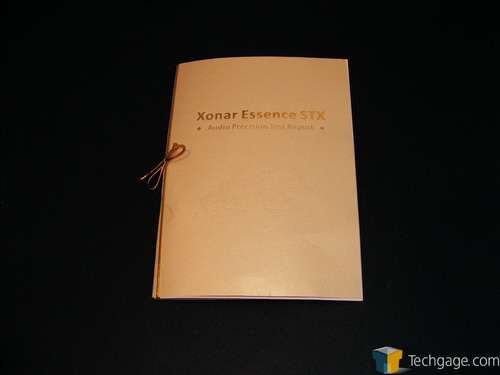 Also included with the Xonar Essence STX’s bundle is an elegantly-bound “Audio Precision Test Report”, which was generated using laboratory-grade test instruments made by Audio Precision. The same instruments used to measure the Xonar Essence STX’s performance characteristics are used in the testing of high-end audio electronics that feed multi-kilobuck audiophile systems; ASUS’ goal here is clearly to establish the Xonar Essence STX sound card as a true high-end audio component. The AP test report contains test results for a golden sample card’s analog inputs and outputs, which are representative of the best performance from a typical non-modified card. 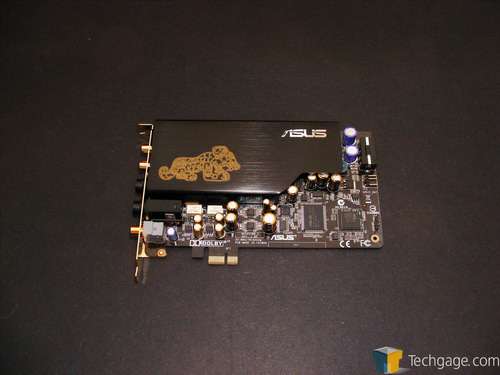 The Xonar Essence STX is a PCI Express 1x card, which means that like other PCI-E Xonars before it, it requires a 4-pin power connector. The card itself is built on a black PCB, and its upper half is shrouded by a black brushed-finish EMI shield, which also features the tiger figure from the front of the card’s packaging. Together with the gold-plated connectors and the gold-colored capacitors on the card, it completes a styling motif that oozes panache and class.

In terms of audio performance, judging by the specs alone, the Xonar Essence STX has it where it counts – it puts up the best specs we’ve yet seen for a PC sound card. The most remarkable specification is the Essence STX’s stratospheric 124dB signal-to-noise ratio through its line-level stereo output, which is unmatched by any multichannel sound card, including Auzentech’s X-Fi Prelude or ASUS’ own Xonar HDAV1.3.

In addition, the Essence STX may lack multichannel analog outputs, but it’s still capable of Dolby Digital multichannel output via its digital Toslink/coaxial combo jack, and it can produce virtual surround-sound effects via its stereo outputs. The focus of the card, of course, is headphone listening, and the card claims to drive headphones rated from 32 to 600 ohms to comfortable levels, though at a slightly-reduced 117dB SNR (which is still excellent).

Next, let’s delve into the technical details of ASUS’ latest Xonar creation, and find out what sets the Xonar Essence STX apart from the other high-end sound cards out there.