As we’ve already covered so far, the ASUS Xonar Essence STX sound card is unique in that it caters specifically to audiophiles, particularly those who enjoy their music through a high-quality set of headphones. Its no-compromise branding suggests a similarly no-compromise attitude toward card design, and ASUS has pulled out all the stops (or at least, all the ones they haven’t already pulled out) in order to wring the last drop of great sound from this card. Let’s take a look at what ASUS has done to bring PC audio over to the lunatic fringe otherwise known as audiophilia. 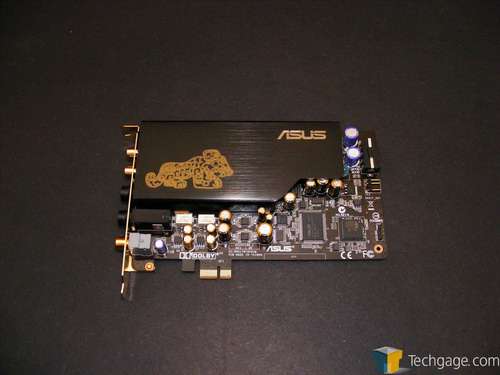 The ASUS Xonar Essence STX isn’t any larger than a typical sound card, though its full-height design means it won’t fit in a low-profile HTPC chassis. As we’ve already seen, the upper half of the card is enshrouded by a metal cover, whose job is to prevent electromagnetic interference (EMI) from entering the card’s analog signal path. However, another defense against the electromagnetic field bombarding its components is a special layer of copper shielding built into the circuit board itself.

The copper shielding is grounded to the PC’s case, a technique ASUS calls “hyper-grounding”, and together with the EMI shield, they keep the card’s output free of external noise. Note the 4-pin Molex connector at the right end of the cardâ€”the Xonar Essence STX requires external power because the PCI Express 1x slot doesn’t satisfy the card’s electrical needs. 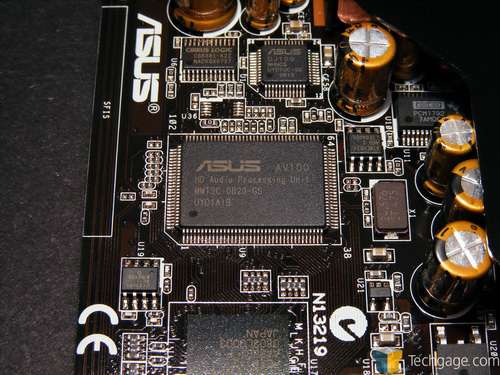 At the heart of the Xonar Essence STX is the ASUS AV100 audio processor, which is based on the C-Media CMI8788 OxygenHD processor. We’ve looked at this processor in detail in the past, but one important thing to note is that this processor doesn’t have any digital signal processing functionality of its own. All processed effects, like Dolby Virtual Speaker or the card’s DirectSound 3D Gaming Extensions, are processed fully in software, and then fed to the AV100. This means that additional functionality can, in theory, be added to the card with only a driver update.

The AV100 can process up to 8 channels of audio, and it’s used in ASUS’ Xonar D1 and DX, but in this application with only two channels in use, it produces even more pristine audio clarity. The AV200 audio processor used on the Xonar D2, D2X, and HDAV1.3 cards, which is a higher-binned version of the CMI8788 processor, is able to maintain the same audio quality with all eight channels passing a signal at the same time, but the AV100 is able to achieve the necessary levels of performance in a two-channel application. 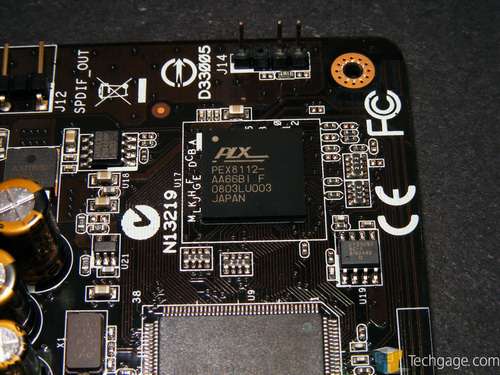 The ASUS AV100 and AV200 audio processors aren’t PCI Express capable by themselves, so they need to be used with a PCI-to-PCI Express bridge chip. The Xonar Essence STX uses the same PLX Technologies bridge chip as the Xonar DX, D2X, and HDAV1.3, which enables it to communicate via a 1x PCI Express slot. While the more elegant solution would be to have PCI Express functionality built right onto the audio processor, it appears that ASUS hasn’t been able yet to pressure C-Media into developing a PCI Express version of the CMI8788. 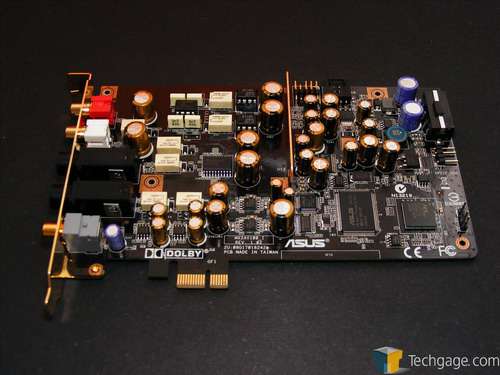 Underneath the EMI shield, which is held on from the back of the card by 4 screws, we see the Essence STX’s analog output stage. Additional shielding is provided by a copper wall that separates the card’s own digital section from its analog section. All of the capacitors on the card, with the exception of three (which aren’t in the card’s signal path) are Nichicon “Fine Gold” capacitors, from the company’s “Muse” range of capacitors made specifically for high-end audio systems. Inferior capacitors in an audio signal path can create a ‘grainy’ sound, but the “Fine Gold” capacitors improve resolution and smoothness. It’s just another trait that the Xonar Essence STX has in common with multi-kilobuck audio electronics. 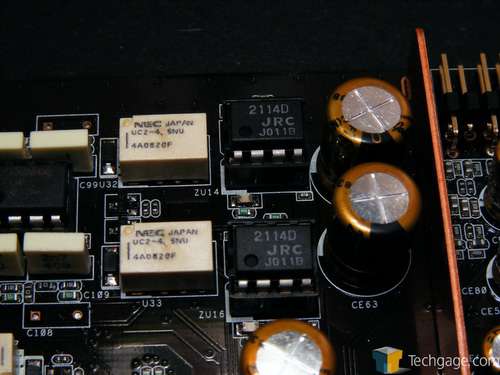 One feature that’s been offered by competitors like Auzentech for quite a while is user-replaceable opamps in the analog signal path, a feature that ASUS only recently adopted for their high-end Xonar HDAV1.3 multichannel sound card. The feature is present here as well, letting you replace the National Semiconductor LM4562 that feeds the stereo line-level outputs or the two JRC 2114D that feed the headphone amplifier section and the front-panel audio outputs with higher-quality opamps like the TI Burr-Brown OPA4134. What’s mildly disappointing is that ASUS didn’t simply pre-install high-end opamps, leaving the true performance potential of the card to be ‘sold separately’ instead. 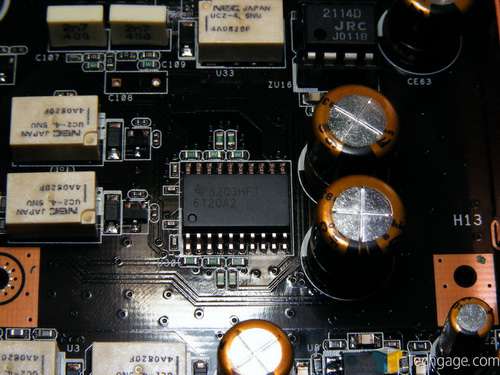 Thankfully, ASUS spared no expense when it came to the IC just below the opamps – the TI TPA6120A2 headphone driver. With less than 14 hundred-thousandths of a percent of total harmonic distortion and a 120dB signal-to-noise ratio, and the ability to produce up to 0.14 watts of output, this headphone driver is considered by some to be the very best in the world. The output of this amp is channeled through the upper ¼” jack, and the device is rated to drive headphones with an impedance of up to 600 ohms – which means it can deliver enough juice to power even the most voltage-hungry headphones. (The Xonar Essence STX has a front panel audio header, but the front-panel output is not amplified.) 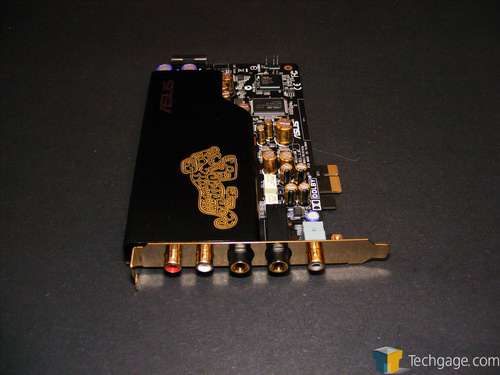 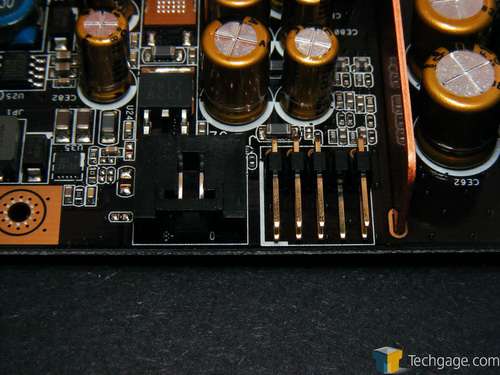 The Xonar Essence STX rear panel offers plenty of ways to get signals into and out of the card. The complement of rear-channel ports on the Essence STX is far from conventional, however, since the card is designed to interface with high-quality stereo components instead of your garden-variety PC speakers or cheapie headphones. There’s no 3.5mm minijack – instead, the card’s bundle includes a stereo-RCA ‘y’ cable that converts the card’s stereo RCA-style line output jacks to a 3.5mm minijack.

The card’s line input jack is via a 1/4″ stereo TRS jack that’s placed right beside the 1/4″ jack that carries the card’s amplified output for headphones. There’s also a combination S/PDIF output jack that carries both a coaxial and an optical digital audio stream, for connecting to a multichannel receiver or high-end discrete DAC (digital-to-analog converter).

Simply from a hardware angle, the ASUS Xonar Essence STX is already unlike any other sound card we’ve ever tested. Next, let’s look at the card’s driver software, and the results from our audio hardware tests.