Without a doubt, ASUS has taken a broad and varied approach to the audio card market. What started with the Xonar D2, a solid all-around contender to take the performance crown away from Creative, has morphed into one of the most well-rounded audio product lines from any vendor. Perhaps what’s most encouraging about the Xonar product line is that ASUS hasn’t paused to rest on its laurels (unlike Creative, which has at times seemed more interested in protecting its proprietary technology than encouraging broad support or advancing the state-of-the-art).

Instead, ASUS has continued to deliver new and more application-specific Xonar products based on their solid C-Media-sourced audio processors. The Xonar Essence STX is just such an application-specific product, targeted toward two-channel listening and decked-out with drool-worthy audiophile features like its integrated headphone amplifier and user-upgradeable analog components. In listening tests, it delivered one of the most natural, powerful, and compelling PC audio performances we’ve yet experienced, backing up its excellent performance specs with crisp fidelity and plenty of ‘oomph’ to drive even difficult headphones.

Some of those cards even include features like multi-channel RCA audio outputs, as well as digital output over a HDMI pass-through connector. But if you’re looking to enjoy an audiophile-level audio experience at your PC, and don’t want to add the complexity of external DAC and headphone amplifier units, we’re convinced that the Xonar Essence STX is the one-box solution you’re after. 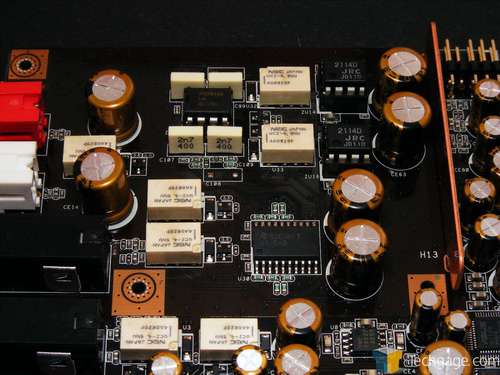 The Xonar Essence STX also comes at an interesting time for another piece of audiophile hardware – the audiophile music server, which is finally finding widespread acceptance. With current low-power and quiet cooling technology, a PC-based music server can be integrated into the extremely low-noise environments inhabited by most high-end audio systems, and the very high signal-to-noise ratio of the Xonar STX fits perfectly with the goals of reproducing a high dynamic range with detail, clarity, and flat frequency response.

On another level, it’s great to see a hardware manufacturer paying more than just lip-service to audiophiles. The PC has long been maligned as a sub-par audio source, unable to deliver the resolution, clarity, and richness of analog media like LPs or digital media like CDs, SACDs, or DVD-Audio. With hardware like the ASUS Xonar Essence STX coming onto the market, keep an eye out – that’s all about to change.

April 6 Addendum: This article was originally posted without the Pros and Cons list, and also the well-deserved Editor’s Choice award. We apologize for this oversight.