Now on their 28th party, AsylumLAN is currently the baby of Derek “Grymskull” Moore. With his organizational skills and his wifeâ€™s networking ability, the attendees of AsylumLAN 28 were greeted with a network ready to deal with the all that the weekend gamers could throw at it.

There is something to be said for a three hour drive with one freaking turn but what can you do? I suppose thatâ€™s why thereâ€™s cruise control. As the sun came up, I was somewhere between Indy and Terre Haute and once again, the weather absolutely sucked. It seems that almost every time I head out to Terre Haute, the weather completely sucks. Such was the case when we visited All American Computers last year. 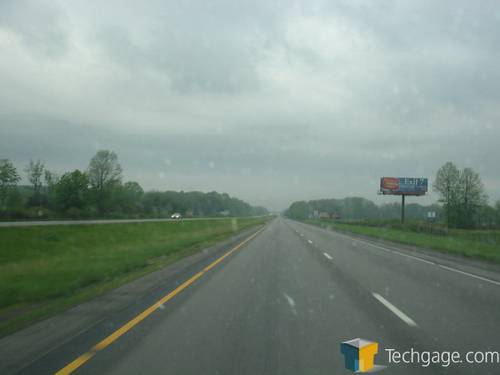 Skipping ahead a few hours, I finally arrived at the 4H fairgrounds and drove past a gun show to the activity center, home of AsylumLAN 28. Yeah, I said gun show. Nothing says welcome to Indiana like a gun show. 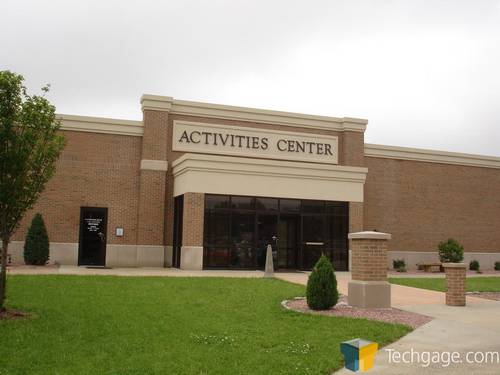 Once inside, it seemed that I had arrived just in time to setup, meet everyone and start to walk around the facility.

One thing that most people donâ€™t take into consideration is the immense amount of effort and preparation that goes into a LAN event. There are countless hours on the phone talking with sponsors. Hundreds of emails are sent out and as the time nears, many more man hours are put into the physical setting up of the networks and power grids.

There are servers that need to be configured and an accurate registration process needs to be in place to keep track of who has paid, who hasnâ€™t and where exactly people are to sit during the entire event. All of these thoughts went through my head as I drove down to Evansville and the more I thought about it, the more I appreciated all that the organizers and helpers put into each and every LAN party.

As I walk into the front doors of the Activities Center, to my right is the registration table. It is here that each and every attendee much check-in and get their name tag. 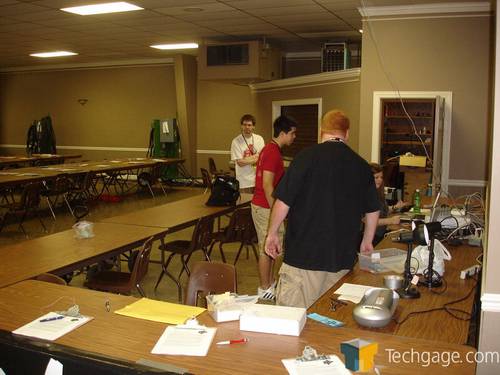 Behind the administration table, the staff is starting to setup the servers that will host the tournaments and keep the entire process going as smoothly as possible. 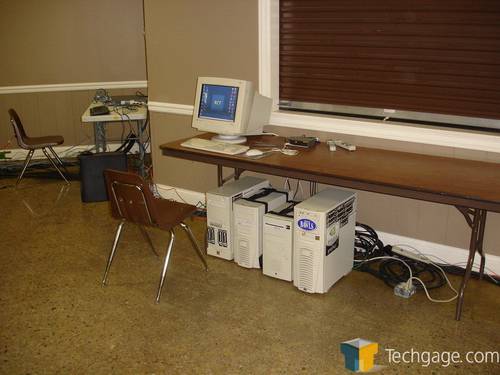 Positioned around the edges of the tables are the power stations. These are where every monitor, PC, switch and console will connect into. 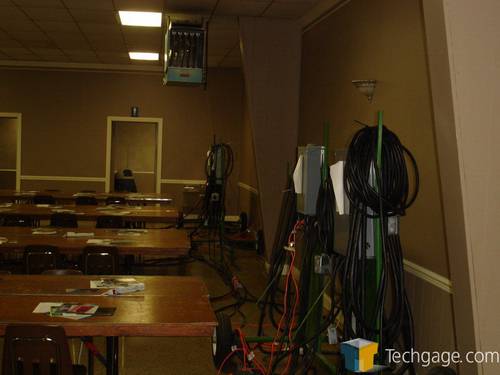 As the doors open up to the attendees, and the gamers start to trickle in, Derek informs me that this will not be as large as the last LAN parties but more than a hundred people are registered and even more are expected to show up at the last minute. The reason for this being that because of a scheduling error on either the AsylumLAN crew or the fairgrounds staff, the event is being held the same weekend as the Kentucky Derby and in these parts of the country, virtually everything is put on hold for this event.

As I setup my machine, I noticed the various amounts of different hardware being setup. Everything from stock Dell machines to the exotically cooled PCs were being setup at the same time. This to me is the beauty of LAN parties. Regardless of the power of the PC, people are just here to play games and forget about life for the weekend. Just walking around, I talked with the people setting up and took the time to take a few pictures. 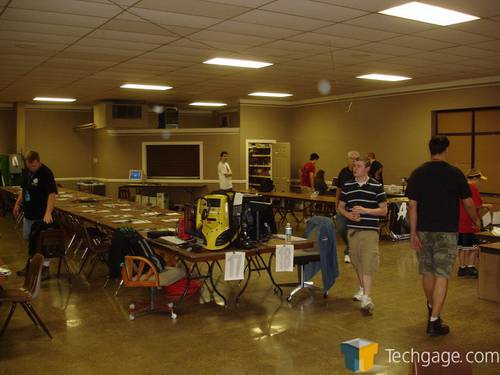 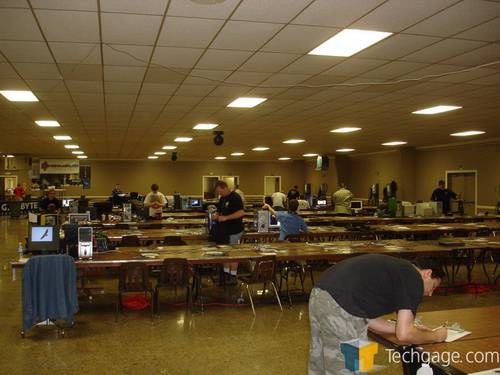 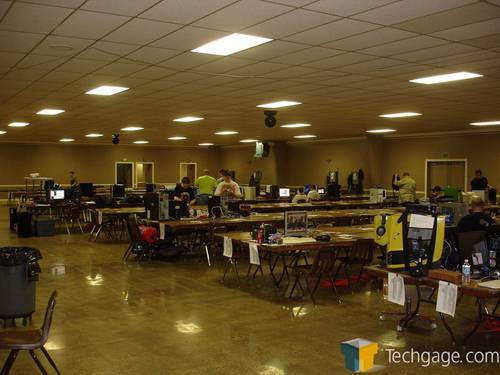 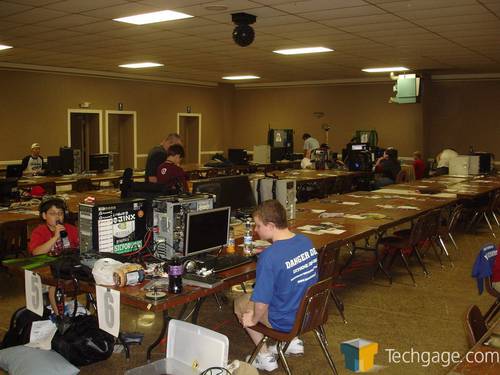 In the center of everything, Derek was setting up a few PCs. One was to run a projector while the other was to show off Ideazonâ€™s latest products. Simply sit down, sign a sheet and play for a while on the latest and greatest that Ideazon has to offer. Throughout the event, Derek could be found walking around, talking to attendees and working on anything that required his attention. 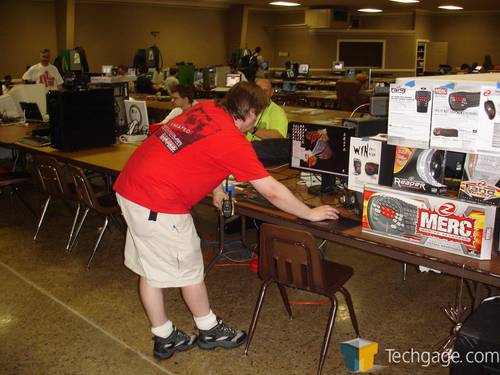 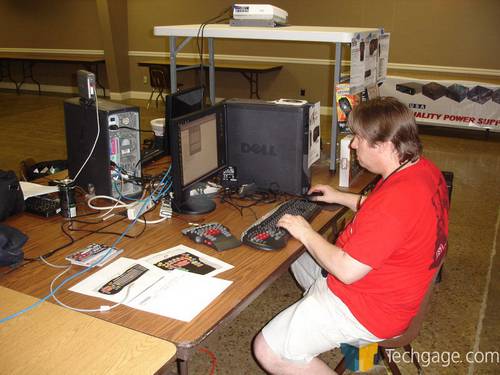 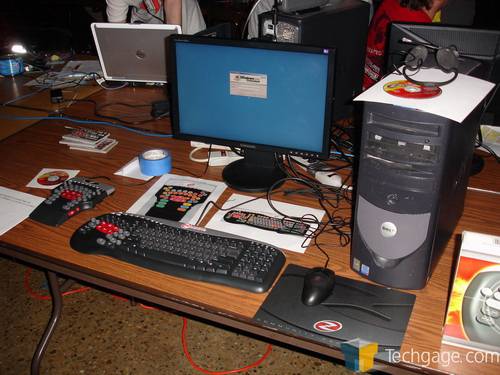